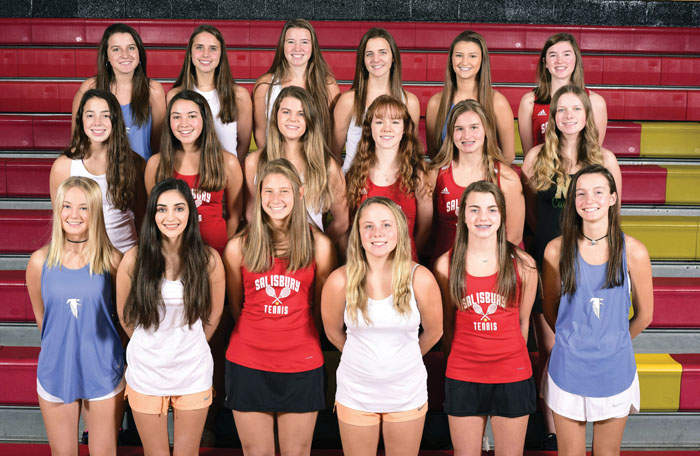 SALISBURY —  When you’re the Rowan County Player of the Year in your second sport, that’s impressive.

When you’re the player of the year after spending a year away from a sport, that’s even more impressive.

Rusher is soccer-first. She’d be the first one to tell you that. But her tennis accomplishments this season as the top player on a Final Four team in 2A were impossible to ignore.

“Lillie is a great athlete,” Salisbury coach Milton Griffith said. “But more than that, she’s a great student with a great personality. We were just proud to have her on our team.”

In the fall of 2017, Rusher made an impact for Griffith and Salisbury tennis as a freshman. She provided an automatic win at No. 4 singles. That’s the year the Hornets, led by seniors Maria Capito and Julia Honeycutt, won the 2A dual team state championship. In the state championship match against Bartlett Yancey, Rusher won her contest in a breeze — 6-0 and 6-0.

That extra time spent on soccer had its rewards. Last spring, Rusher made the All-State soccer team as a sophomore.

That might have been the end of the story for Rusher as far as tennis, but she has friends on the tennis team. She decided to return to the courts this season to help keep Salisbury’s amazing girls tennis tradition going.

“When I was a freshman, we won state, and I can’t tell you how much fun that was,” Rusher said. “I missed the fun of it and I just really missed playing tennis, so I decided to come back and try to win another state championship. There were a lot of people who wanted me to return to tennis. My family wanted it — and my teammates. That motivated me.”

When Salisbury played its opening match of the season on Aug. 21, Rusher was at No. 1. singles. She led a young team that had two juniors, three sophomores and a freshman in the top six.

“She was a great team captain,” Griffith said. “Hard worker. Led by example. She inspired her teammates to play their best.”

Rusher lost in a non-conference match early in the season against Concord standout Molly Handler, but she wouldn’t lose again for a long time.

The chief challenger for Salisbury in the Central Carolina Conference now is the new school, Oak Grove. Oak Grove split with Salisbury in 2018 and finished second to the Hornets in the standings.

With CCC teams only playing each other once, instead of twice, in 2019, it was clear that the CCC championship was coming down to the Oak Grove-Salisbury clash in mid-September.

Rusher’s individual opponent was Oak Grove phenom Jessica Fuchs, who had burst on the CCC scene as a freshman in 2018, when Rusher was away from the courts. Fuchs had earned CCC Player of the Year honors, interrupting a string of Salisbury players of the year in the conference that dated back to 2006. And Fuchs hadn’t just ruled the CCC, she had finished as 2A state runner-up. She was legit.

Rusher is so competitive that sometimes she surprises herself. She dug in and dug deep. She played out of her mind. Her 6-3, 6-4 victory against Fuchs was huge.

“Probably the best match I ever played,” Rusher said.

Rusher’s teammates Meredith Burton and Sophie Chmiel dropped their first sets, but they came all the way back to claim second sets and third-set tiebreakers. Rusher and Margaret Thurman won an 8-6 scrap at No. 1 doubles. Salisbury took the match, 6-3. That victory meant the Hornets’ 17th consecutive CCC team championship.

Rusher was voted CCC Player of the Year by the league’s coaches.

Rusher qualified for the state individual tournament in singles. She lost early, but she was there. That’s an honor.

“Lillie plays every match as if it were her last,” Griffith said. “She’s never going to give up. Even when she’s the underdog, Lillie won’t give up.”

Salisbury’s doubles team of Burton and Thurman qualified for the state individual tournament.

Salisbury beat Oak Grove again in a third-round playoff match and stayed unbeaten in dual team matches until Oct. 31 when it finally lost to eventual state champ Hendersonville in the 2A regional final.

In 3A, Carson’s record-breaking season mirrored that of the Hornets in 2A.

Along the way, Carson not only went 10-0 in the North Piedmont Conference, it posted three strong playoff wins. Carson knocked out Concord and Cox Mill, programs that have been hard for NPC teams to beat.

Carson’s No. 1 player Lindsey Conrad was honored as NPC Player of the Year. Maci Cooper, Carson’s No. 2,  beat outstanding players in the second and third rounds of the playoffs. Carson’s No. 3 and No. 4 players Jadyn Kirpatrick and Carleigh Perry were NPC doubles champs.

It was a fantastic season for the Hornets and Cougars, seasons that were basically identical. Galloway and Griffith are the Post’s co-coaches of the year.

Because Salisbury and Carson were so dominant, it’s an unusually large all-county team. The top six Hornets and Cougars had super records and had to make it.

West Rowan, the county’s third-best team, also had a fine season (8-4). West got a pile of wins in singles and doubles from its No. 3 and No. 4 players (Mira White and Skylar Jahnke), so the top four Falcons were easy picks.