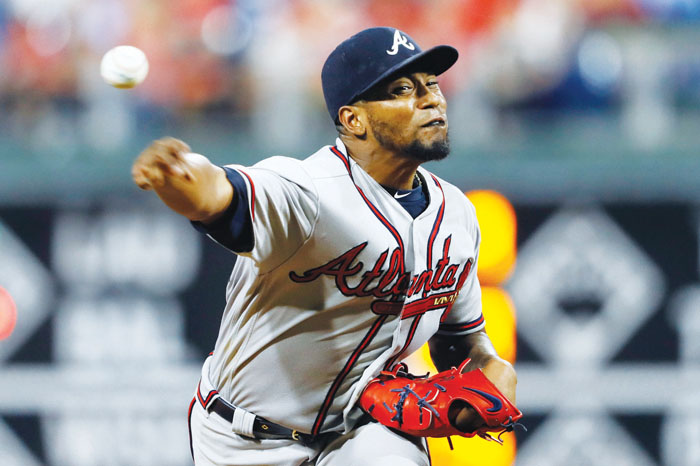 FILE - In this Sept. 12, 2019, file photo, Atlanta Braves' Julio Teheran throws during a baseball game against the Philadelphia Phillies in Philadelphia. The Los Angeles Angels have agreed to a $9 million, one-year contract with the right-hander, a person familiar with the negotiations told The Associated Press, Thursday, Dec. 19, 2019. Teheran spent the past seven seasons with Atlanta. The Braves declined his $12 million option. (AP Photo/Matt Slocum, File)

ANAHEIM, Calif. (AP) — The Los Angeles Angels added another arm to their rotation, agreeing to a $9 million, one-year contract with right-hander Julio Teheran, a person familiar with the negotiations told The Associated Press .

The person spoke Thursday on condition of anonymity because the deal, first reported by ESPN, is subject to a successful physical.

Teheran spent the past seven seasons with the Atlanta Braves, who declined his $12 million option. He was 10-11 with a 3.81 ERA last season and was left off the Division Series roster against St. Louis, then added as a replacement when Chris Martin got hurt

The Angels had the second-highest ERA in the major leagues last season at 5.64 ERA and have made pitching a major priority during the offseason. They tried to sign Gerrit Cole before he acceoted a $324 million, nine-year deal with the New York Yankees and have turned their attention toward Dallas Keuchel and Hyun-Jin Ryu. They also acquired Dylan Bundy in a trade with Baltimore.

In addition to Teheran and Bundy, Los Angeles has Andrew Heaney, Shohei Ohtani and Griffin Canning in its projected rotation.

MARTÍN PÉREZ COULD EARN $14.5 OVER 2 YEARS WITH RED SOX

BOSTON (AP) — Martín Pérez and Boston finalized a one-year contract that guarantees $6.5 million, a deal that would be worth $14.5 million over two seasons if the Red Sox exercise a 2021 option and the 28-year-old left-hander regularly starts.

Pérez is in position to fill the rotation spot that opened when former AL Cy Young Award winner Rick Porcello left to sign with the New York Mets.

Pérez was 10-7 with a 5.12 ERA for Minnesota last season after spending his first seven big league seasons with Texas. He is 53-56 with a 4.72 ERA in 157 starts and 16 relief appearances. His lone postseason appearance was in 2015, when he started and lost Game 3 of the Division Series against Toronto.

NEW YORK (AP) — The Major League Baseball Players Association has filed a grievance against the New York Yankees in an attempt to regain the remaining $26 million due released outfielder Jacoby Ellsbury.

The grievance was disclosed to The Associated Press by a person familiar with the process who spoke on condition of anonymity because no announcement was made. Barring a settlement, the grievance will be heard by arbitrator Mark Irvings.

New York converted Ellsbury’s $153 million, seven-year contract to non-guaranteed, contending he violated the deal by getting unauthorized medical treatment, then released the 36-year-old outfielder on Nov. 20. The Yankees said he was treated by Dr. Viktor Bouquette of Progressive Medical Center in Atlanta without the team’s permission.

Ellsbury contends any treatment he received without authorization was for a non-baseball-related injury or condition, which does not require the club’s consent.

New York’s projected payroll is just at the $248 million threshold where the highest luxury tax rate starts. and Ellsbury accounts for roughly $21.9 million of the Yankees’ tax payroll. New York will pay 30% on the amount above $208 million through $228 million, 42% on the next $20 million and 75% on the amount above $248 million. If the Yankees exceed $248 million, their top pick in the 2021 amateur draft would be moved back 10 places.

Ellsbury hit .264 with 39 homers, 198 RBIs and 102 stolen bases in 520 games in six seasons with the Yankees. He injured a muscle in his right side early during spring training in 2018, developed a bad back and had surgery that Aug. 6 to repair a torn labrum in his left hip. He experienced plantar fasciitis in his right foot during his rehab program before spring training this year.

Irvings is expected to decide next month on the union’s grievance against the Chicago Cubs over Kris Bryant. The third baseman debuted on April 17, 2015, leaving him one day shy of the service time needed to become a free agent after the 2020 season. Bryant contends he was held in the minors in a deliberate effort to delay his free-agent eligibility.

ST. LOUIS (AP) — The St. Louis Cardinals searched all over the world, looking for the right kind of left-handed pitcher. They think they’ve found him in Kwang Hyun Kim.

The NL Central champions and the 31-year-old South Korean finalized an $8 million, two-year contract, a deal that would pay him $10 million over the two years if he pitches regularly.

Through an interpreter, Kim said Tuesday he had followed the Cardinals and their success while growing up and hoped someday to play for St. Louis.

At his Busch Stadium news conference, Kim held up a small sign that read “Hello STL.”

Kim would get a $250,000 assignment bonus if traded and will become eligible for free agency when the contract ends.

Kim went 17-6 with a 2.51 ERA in 190 1/3 innings last season for the SK Wyverns, earning him the award as the best pitcher in the Korean Baseball Organization.

Kim held a sign that read “Thank You SK” at his news conference in St. Louis.

OF AVISAÍL GARCÍA AGREES TO $20M DEAL WITH MILWAUKEE

MILWAUKEE (AP) — Now that the Milwaukee Brewers have added Avisaíl García to their talented outfield, Ryan Braun could see more time at first base.

García’s $20 million, two-year contract was finalized Tuesday, a deal that includes a 2022 club option and could be worth $30 million over three years.

“Ryan’s going to see some time at first base,” general manager David Stearns said. “He’s open to it. He understands it. We certainly believe he can play over there at a good level, so that will be part of the rotation in 2020 but that will not be his exclusive position.”

García batted .282 with a career-high 20 home runs and 72 RBIs for the Tampa Bay Rays last season, spending most of his time in right field. He joins a crowded Milwaukee outfield that includes 2018 NL MVP Christian Yelich, Braun and two-time All-Star Lorenzo Cain.

Milwaukee also agreed to a one-year deal with corner infielder Ryon Healy that pays a $1 million salary in the major leagues and $250,000 in the minors, with $250,000 guaranteed. He could also be an option at first base. The 27-year-old Healy batted .237 with seven homers in 47 games last season with the Seattle Mariners.

García was limited by knee and hamstring injuries during his final season in Chicago in 2018. Garcia helped the Rays reach the AL Division Series last season for the first time since 2013.

“The trainers in Tampa did a great job with me,” García said. “When you’re healthy, you can do a lot of things. I think that’s the case with me. I got to play every single game. I got surgery on my knee in 2018, now I go to Tampa and stay healthy, and I put up good numbers.”

“I think it’s a great place to play baseball,” García said of Milwaukee. “They are ready to compete, so that’s what I liked. I like to win. That’s the right team to go to.”

Garcia has a career average of .273 with 96 home runs and 374 RBIs since beginning his major league career with the Detroit Tigers in 2012.

Milwaukee also announced it has signed infielder Jace Peterson to a minor league contract with an invite to major league spring training. Peterson batted .220 with two homers in 29 games with Baltimore last season.

“He’s someone that had a lot of desire to come and play here in the States,” Cardinals president of baseball operations John Mozeliak said. “We had a lot of analytical support that backed up the success he was having over in the KBO, and we felt that when you looked at our needs, especially when you think about the left side of our pitching, it made a lot of sense to pursue this.”

Kim could be the Cardinals’ first full-time left-handed starting pitcher since Jaime García made 30 starts in 2016. But it was Kim’s versatility that appealed most to the Cardinals.

The Cardinals had only two starts by lefties last year, both by rookie Genesis Cabrera.

“There are some pitchers out there that had no interest in us if they weren’t the starter,” Mozeliak said. “We have a little more flexibility here, and the fact that he understands that it’s not a guarantee but appreciates the opportunity is very helpful.”

“The combination of what he was doing the last few years, obviously we felt confident that coming over here he could have success and clearly time will tell,” Mozeliak said. “You look at the success he had over there, historically that seems to play here.”

If Kim makes the major league roster, he will become the 15th South Korean pitcher to appear in the major leagues and the second for the Cardinals after Seung-hwan Oh in 2016-2017.