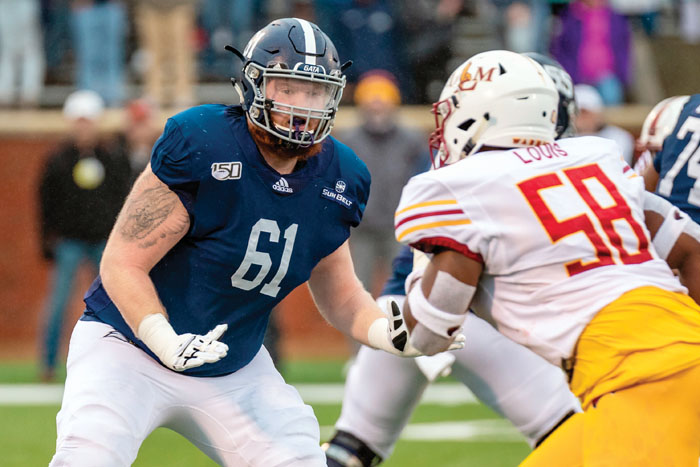 The winners were announced Thursday and they will be honored at the College Football Playoff semifinal at the Fiesta Bowl on Dec. 28.

Luton suffered season-ending injuries the past two seasons, but returned this year to pass for 28 touchdowns and three interceptions.

Octavion Wilson started his career at Division III powerhouse Mount Union, but was forced to give up football and school after a heart condition led to lingering issues with pain and eventually depression. He returned to the game after three years away.

Drew Wilson returned to action this year and regained his starting job after missing all last season recovering from a detached retina that left him legally blind in his right eye.

He needed four surgeries to fix his eye and the recovery forced him to not only miss the 2018 season, but the entire fall academic semester. Doctors were not sure what caused his retina to detach, Wilson said. He was told it might have traced back to an injury he had in high school that caused bleeding behind his eye that was treated with steroids.

Wilson returned to Georgia Southern in the 2019 spring semester and began working with strength and conditioning coaches to get back into playing shape. The 300-pounder had gotten up to 340 because of inactivity.

He was given clearance by a doctor to return to football, but he did not participate in spring practice. Instead, he focused on getting his weight down and his strength up for preseason camp.

“My first practice was a big deal for me. You know I told myself that I could play again, but I didn’t know how my vision was going to effect me, seeing a blitz or seeing somebody walk up on the line. I was kind of nervous about that at first,” Wilson said. “After that first practice, I was like, ‘Man, I can really do this.’”

Wilson starts at right tackle for Georgia Southern and helped pave the way for a triple-option attack to run for 261.5 yards per game (eighth in the nation). The Eagles finished 7-5 and were the only team to beat Sun Belt Conference champion Appalachian State.

Georgia Southern plays Liberty in the Cure Bowl on Saturday in Orlando, Florida.

Wilson said his left eye is starting to take over the work that his right eye can no longer do and life is pretty normal. He has one more surgery coming after the season to have a cataract removed.

“I can do everything that I did before this happened,” he said, “but now I have to check everything twice.”

A $30,000 donation will be made to the general scholarship funds of the winners’ schools. Half the donation will made in the name of the winners and the other half will be made in the names of six finalists who received honorable mention for their comeback seasons: Notre Dame defensive back Shaun Crawford, Saint Xavier quarterback Alex Martinez, Kentucky defensive end Josh Paschal, Chapman offensive lineman Hunter Spriggs, Northern Iowa receiver Isaiah Weston and Minnesota defensive back Antoine Winfield Jr.

Drew Wilson was selected by a vote Associated Press college football poll voters. Octavion Wilson was chosen by a vote of the COSIDA (College Sports Information Directors of America) small-college advisory board. Luton was chosen by a combination of AP vote, COSIDA, the Fiesta Bowl organization and the editors of the Touchdown Illustrated.

Tests are ongoing, Orgeron said, adding that he does not know the extent of Edwards-Helaire’s injury and that he’s “not sure that Clyde can play or can’t play yet” when No. 1 LSU meets Oklahoma in the national semifinals at the Peach Bowl on Dec. 28.

Edwards-Helaire is LSU’s leading rusher with 1,290 yards and 16 touchdowns. He also has 50 receptions for 399 yards and one TD.

While LSU is deep at running back, Edwards-Helaire has excelled in varaious roles, from pass-blocking and straight-on power running to catching passes out of the backfield.

“Clyde’s so versatile, we might need three guys to do what he needs to do if he can’t play,” Orgeron said.

Orgeron says Edwards-Helaire is not practicing for now and will be re-evaluated after getting some rest.

The coach says the running back’s injury was a non-contact injury and also called it “very unusual.”

If LSU defeats Oklahoma, it would play for a national championship in New Orleans on Jan. 13 against the winner of the Fiesta Bowl, which matches second-seeded Ohio State against third-seeded Clemson.