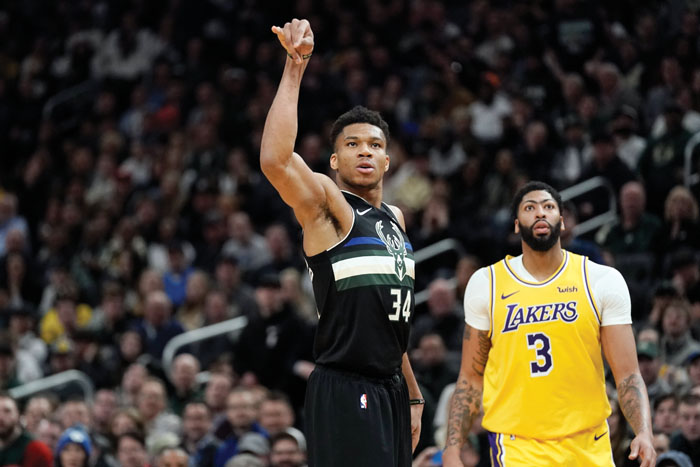 MILWAUKEE (AP) — Giannis Antetokounmpo had 34 points and 11 rebounds, and the Milwaukee Bucks beat LeBron James and the Los Angeles Lakers 111-104 Thursday night in a showdown of the NBA’s top teams.
Antetokounmpo had seven assists and a career-best five 3-pointers, and George Hill added 21 points off the bench for the Bucks. Milwaukee improved to 25-4 after ending an 18-game winning streak against Dallas on Monday night.
James had 21 points, 12 rebounds and 11 assists for his seventh triple-double of the season, and Anthony Davis had 36 points and 10 rebounds for Los Angeles. The Lakers dropped to 24-5 largely because their bench was outscored 34-4 by the Bucks’ reserves.
Milwaukee led by six after the first quarter then opened the second with a 20-7 run. Davis and James combined to shoot 6 for 20 in the first half, and the Lakers had 10 turnovers. The Bucks led 65-46 at the break.
NETS 118, SPURS 105
SAN ANTONIO (AP) — Patty Mills had 27 points and San Antonio overcame a career-high 41 points from Spencer Dinwiddie to beat Brooklyn.
Mills had 21 points in the second half, shooting 5 for 8 on 3-pointers as the Spurs rallied from a 14-point deficit to beat the Nets for the 17th straight home game.
LaMarcus Aldridge added 20 points and 10 rebounds for San Antonio.
Brooklyn’s Kyrie Irving missed his 17th straight game with a right shoulder impingement. Dinwiddie tried to cover by shooting 14 of 29 from the field, eclipsing his career high by two points.
JAZZ 111, HAWKS 106
ATLANTA (AP) — Donovan Mitchell scored two of his 30 points on a tricky baseline drive that put Utah ahead for good.
Mitchell faked a pass from under the basket before slamming the breaks and connecting from beneath the backboard with 3:47 left. That made it 101-99, and he cemented the win with two free throws with 13 seconds left.
The Jazz won their fourth straight game by dominating near the rim. They outscored the Hawks 62-46 in the paint and outrebounded them 52-39. Rudy Gobert had 20 points and 13 rebounds for Utah.
Point guard Trae Young led the Hawks with 30 points, but Atlanta lost its sixth consecutive game. Jabari Parker scored 23 points.
___
More AP NBA: https://apnews.com/NBA and https://twitter.com/AP_Sports