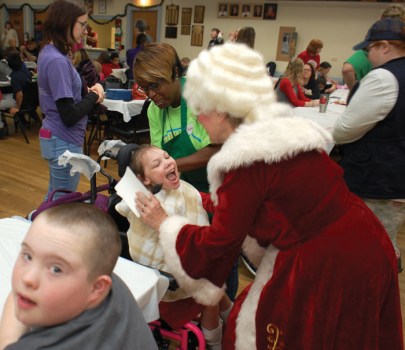 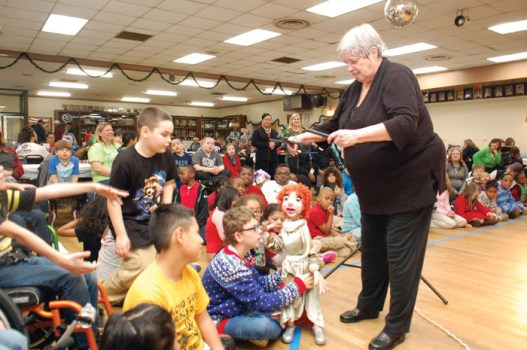 Mark Wineka/Salisbury Post A marionette controlled by Susan VandeWeghe dances close to some of the children attending Tuesday's Christmas Party at the Harold B. Jarrett American Legiuon Post 342. 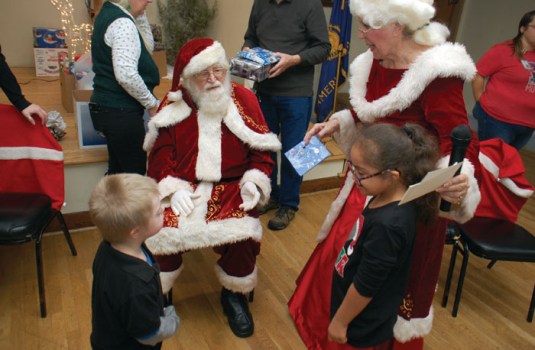 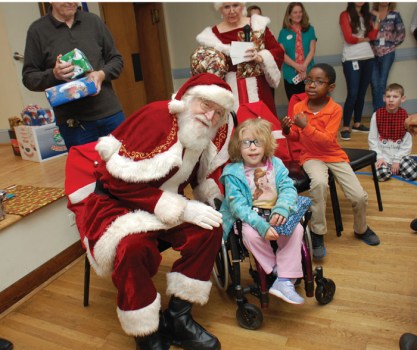 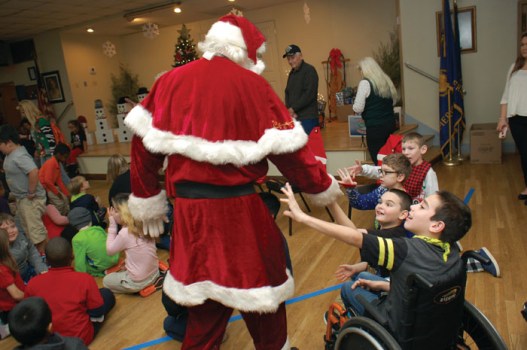 SALISBURY — Mrs. Claus stopped and asked for the students’ attention.

“Boys and girls, I think I hear Santa Claus!” said the missis, and with that, chaos ruled — or at least cookie- and ice cream-fueled enthusiasm — for the next hour as the Clauses handed out gifts to 112 special students from seven different elementary schools.

It was all part of the annual Christmas party provided by the Legionnaires and auxiliary of Harold B. Jarrett American Legion Post 342.

For the students, the event included a show from the Mountain Marionettes of Susan VandeWeghe, a box lunch from the Chick-Fil-A restaurant in Salisbury, an individual gift for each of the children and a treat bag to take home from the legion post.

Besides Chick-Fil-A and the legion itself, major sponsors for the party are Cloninger Ford-Toyota and the Wallace & Graham law firm.

Post member Wayne Kennerly says Christmas doesn’t start for him and other Legionnaires until this party.

“I’ve loved it since the first day — it does something to you here,” said auxiliary member Phyllis Richardson, touching her heart.

A retired teacher, Richardson has attended pretty much every party since the first one organized by Kay Brown Hirst and her late husband, Ed, back in 1978.

Today’s organizational duties fall mainly on Legionnaire Harry Garwood and Auxiliary President Penny Sides. The pair also do much of the toy-buying.

Sides doubled as Mrs. Claus, reading out names and helping Santa Claus hand out gifts to each student.

“It’s a Legion project, but the auxiliary always helps,” said Garwood, who at 87 acknowledges that he may soon have to turn over these duties to new blood.

His daughter Julie Pyle serves as catering director for the local Chick-Fil-A, and she was on hand Tuesday with marketing director Emily Moore.

The Chick-Fil-A lunches of chicken nuggets, chips and a chocolate cookie took a good-sized burden off the Legionnaires, who have done all the cooking in years past.

The Legion still provided the drinks and ice cream Tuesday.

In weeks prior to the event, students are given a choice from three categories of gifts. And the items often hastily unwrapped Tuesday included things such as balls, dolls, animals, books, trucks and jump ropes

Richardson and Garwood said they enjoy going back and looking at pictures from the party and seeing all the kids’ faces.

Again, it tugs at the heart.