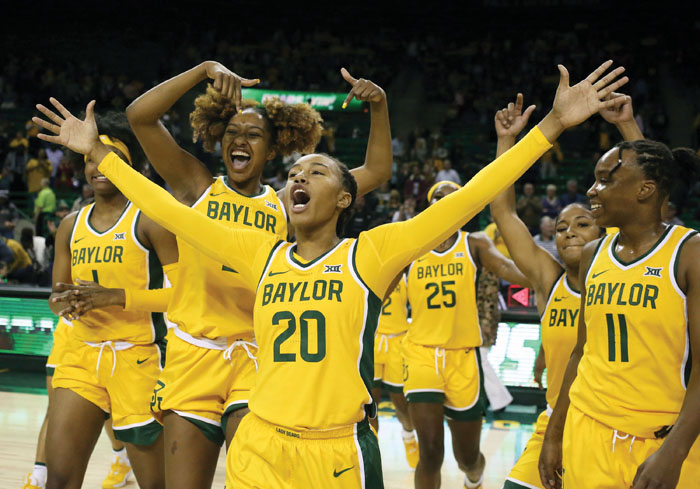 WACO, Texas (AP) — Juicy Landrum didn’t have any trouble finding a rhythm after a two-week layoff for No. 7 Baylor.
The senior guard set an NCAA record by making 14 3-pointers for all of her career-high 42 points, leading the Lady Bears to a 111-43 victory over Arkansas State on Wednesday.
Landrum attempted all but one of her 24 shots from 3-point range as Baylor (9-1) shot 46% from beyond the arc (15 of 33) and 59% overall. She also had eight rebounds and seven assists.
Trinity Oliver had the other 3 in Baylor’s 56th consecutive home nonconference win since a loss to UConn in January 2014.
Landrum had nine 3s in the second half and made her the record-breaking shot with just over two minutes left in the game. She was immediately replaced, getting a standing ovation as she walked to the bench.
“It’s just a joy to watch teammates be happy for each other,” coach Kim Mulkey said. “That’s hard to do, to hit that many 3s in a game. You’re not going to get that opportunity very often.”
The previous NCAA record for 3s was 13 by Lamar’s Moe Kinard in 2018. Landrum shattered the Baylor mark of nine 3-pointers held by Odyssey Sims and Mandy Hayworth.
“Without my teammates and my coaching staff, it wouldn’t have been possible for me to break that record,” said Landrum, whose had previous career highs of 23 points and five 3s. “They were able to find me today. It was just great.”
Nalyssa Smith was 6 of 6 from the field and finished with 15 points and seven rebounds. Queen Egbo had 13 points and 10 rebounds. Erin DeGrate scored 11.
Jireh Washington led Arkansas State (3-7) with 16 points. The Red Hawks shot just 29% (15 of 52).
“We want to get to the point to where we want to try and win these games,” coach Matt Daniel said. “I think we can get there, but it’s a process, not a quick fix.”
BIG PICTURE Arkansas State: The Red Hawks were just 2 of 18 from 3-point range. In their three wins, they shot 45% from beyond the arc. Arkansas State had its lowest-scoring quarter of the season while getting outscored 28-4 in the second.
Baylor: The Lady Bears were playing their only game in a stretch of 25 days. After the two-week layoff, they don’t play again for another 12 days.
POLL IMPLICATIONS
It might be difficult for the defending national champions to move up much before the start of conference play. Fifth-ranked South Carolina, which handed the Lady Bears their only loss Nov. 30, plays Duke on Thursday.
BIG RUNS
Baylor never trailed, opening on a 10-0 run and scoring the last 17 points of the second quarter for a 58-19 halftime lead. An 18-1 run in the fourth quarter helped fuel the final margin of 68 points.
PREYING ON MISCUES
The Lady Bears forced 25 turnovers by Arkansas State and scored 37 points off them while giving up just five points on eight turnovers.
INJURY UPDATE
There is still no timetable for senior Lauren Cox’s return from a stress reaction in her right foot. Sophomore Caitlin Bickle had surgery after sustaining a knee injury in the previous game against Georgia on Dec. 4. While Bickle hasn’t been ruled out for the season, there is no timetable for a return.
UP NEXT
Arkansas State: At Louisiana Tech in final nonconference game on Dec. 29.
Baylor: Hosts Morehead State on Dec. 30 before opening Big 12 play at Oklahoma on Jan. 4.