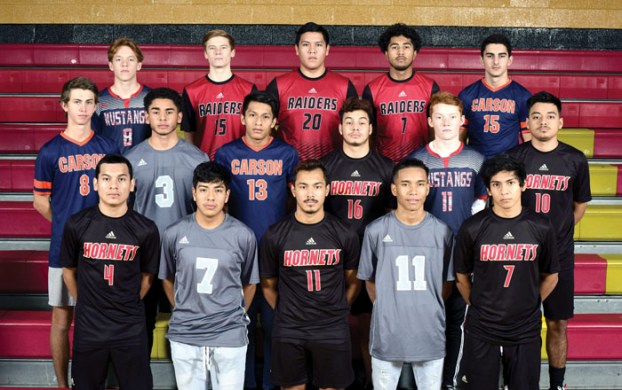 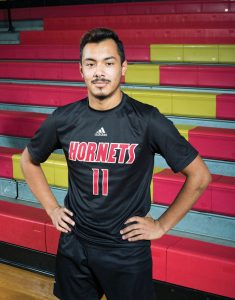 SALISBURY — Athletes find out that they’re being recognized as the Post’s player of the year by different means.

Salisbury junior Josh Portillo, the Post’s player of the year for soccer, found out in a unique way.

“I found out in church, actually,” Portillo said. “Our pastor’s wife told me. She’d seen it somewhere and she congratulated me. It really surprised me.”

Portillo, who has been entranced by the beautiful game since he was 3 years old, shouldn’t have been shocked by the accolade. He came out of nowhere to transform Salisbury’s season.

He was enrolled in the Early College Program at Rowan-Cabarrus Community College last year. He made the move to Salisbury High for the current school year, mostly for the chance to play with his younger brother, Chris, who had made an impact for the 2018 Hornets as a freshman.

“My brother is a very good player, and family is really important to us,” Portillo said.  “And I love soccer. It’s a great sport. It keeps you healthy. It keeps you in shape.”

Salisbury coach Matt Parrish has a tremendous program, but the 2019 season seemed unlikely to add to the Hornets’ stellar tradition.

The top four scorers from the 2018 SHS team that went 24-3-1 and won the Central Carolina Conference — Tony Figueroa, Luke Holland, Eriq Argrett, and Jack Fisher —had graduated. No one, including Parrish, had any clue where the goals were going to come from.

“We were desperate for someone to step up to fill part of that scoring void,” Parrish said.

It took time for the Hornets to sort things out. Josh Portillo began the season in the starting lineup, but as an outside midfielder.

“The team had lost 11 seniors, so there were plenty of doubters,” Josh Portillo said. “And when we started the season, we had no chemistry.”

But chemistry was coming.

“Mostly it came just through hard practices together,” Portillo explained. “When you practice hard, you start building a bond with your teammates. That bond is the part of soccer I enjoy more than anything.”

Josh found that chemistry first, not surprisingly, with his brother. The Portillo siblings’ rapport then extended to include veteran Juan Salazar.

Then all of the front six started to mesh.

When Parrish moved Josh to striker, all 11 Hornets began to click as a unit.

“That move helped Josh reach his full potential and helped him find his niche on the team,” Parrish said. “He became our offensive catalyst. He was instrumental in our success. He’s got that nice combination of speed and strength on the ball, — and he’s a finisher.”

On Sept. 11, Josh had a hat trick, plus an assist, in a wild 6-4 CCC win against Central Davidson. The Hornets got down a couple of times, but they kept fighting back.

On Oct. 2, the Hornets faced the Thomasville team that had pounded them on opening night. This time the Hornes won, 7-3. Josh was relentless. He scored four goals.

Twenty-four hours later, Josh scored five more times in a non-conference matchup with a competent West Stanly team. That made it an avalanche of nine goals in two days.

“It’s hard to describe the sensation you get from scoring a goal, but it’s such a great feeling,” Josh said. “Soccer is just something that runs in my blood, I think. I’ve got a passion for it.”

Salisbury’s record stood at 5-4, halfway through the rigorous CCC season, but the Hornets went 7-2 in the second half to tie for second place in the league at 12-6. There were a lot of tense victories. It was a battle almost every night, Seven of the 10 CCC teams made the state playoffs.

On the final night of the regular season, Josh scored both regulation goals for the Hornets in a fierce road struggle at South Rowan that ultimately was decided by penalty kicks. He converted his PK, as the Hornets pulled out the victory. South had whipped the Hornets at Ludwig Stadium, 4-1, on Sept. 30 in the first meeting.

“Josh sparked a second-half run that saw us far surpass our results from the first time through the league,” Parrish said. “He forced opponents to key on his abilities. That opened up possibilities for our other players to be successful.”

It appeared the Hornets had been stuck with a nasty playoff draw with a first-round matchup against CCC rival Oak Grove, a club that had beaten the Hornets twice by 1-0 scores.

But Josh was constantly on the attack in that 2A playoff matchup. He struck the cross bar a few times for near misses, but he also produced a goal and an assist in a 3-2 victory.

The Hornets fell in the second round, losing in overtime on the road to a Shelby squad that finished 22-1-2.

But a 16-8 season was much more than it looked like the rebuilding Hornets were capable of in September.

Portillo amassed 29 goals to lead Salisbury’s resurgence and added 11 assists (second on the team). He was named all-region.

“Josh proved to be one of those players who exceeds all expectations,” Parrish said. “Without his prowess, our season would have been nowhere near as successful as it was.”

Portillo, who also did some kicking for the football team that reached the 2AA state championship game, had no complaints about his soccer season.

“From where we started, to where we finished, we showed great improvement,” he said. “Even when we lost, we left our hearts on the field.”

Runner-up for player of the year honors was South Rowan senior goalkeeper Parker Anderson, who had 267 saves, while allowing 46 goals.

South (13-11, 9-9 CCC) was the only team in the county other than Salisbury to post a winning overall record.

South’s Russ Fisher is the Post’s coach of the year. South qualified for the state playoffs for the first time since 1993 to end one of the state’s longest droughts.

South went 4-1 in county games, splitting with Salisbury and beating Carson, West Rowan and East Rowan.  South’s 2A MaxPreps ranking rose from 98th in 2018 to 62nd this season.

By Mike London mike.london@salisburypost.com SALISBURY — Golf is normally a game of peaks and valleys, of ups and downs, but... read more