A friend to the end: Johnny Safrit made sure his circle included you 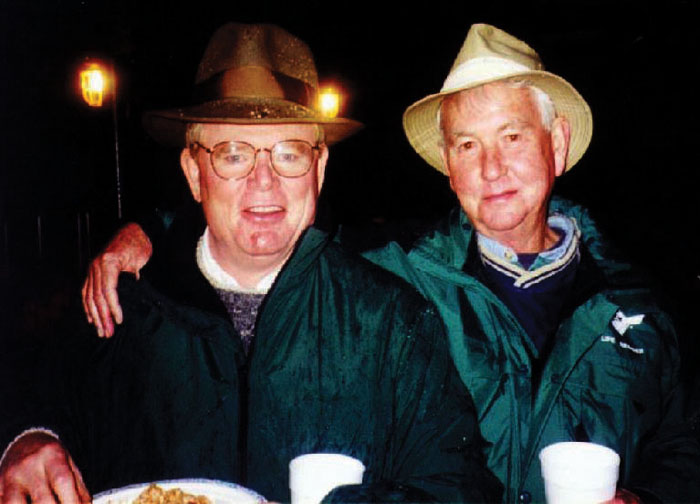 Photo courtesy of Hap Roberts Jake Alexander, left, and Johnny Safrit posed for this picture while attending an oyster roast in 2001.

SALISBURY — Early Thursday afternoon, there’s a good chance the 30 or so men of the Everyman’s Bible Class will walk together into First Presbyterian Church for the funeral of Johnny Safrit.

Safrit was one of them and an “everyman” himself — a friend, it seemed, to anyone he ever met.

Since Safrit’s death at age 69 Saturday, Bill Burgin has been asking himself and others, “Why did everybody like Johnny?” He keeps returning to the answer that his best friend knew how to contact and connect with people.

“That was his gift,” Bill Burgin said.

Jake Alexander, once catcher to the curves and fastballs southpaw Safrit threw for their Little League team, says Safrit was one of the most empathetic people he has ever known.

“This is heartbreaking,” Alexander said, “not just to me but scores of people who knew Johnny or were helped by Johnny, which was the real story behind his life.”

Safrit, who built a successful landscape construction business in Salisbury, never hid the fact he was a recovering alcoholic.

Alexander says it made Safrit an expert in spotting others in distress. He could have candid conversations with people battling drink. Burgin says Safrit knew all the excuses, stories and hiding places, and he could bluntly tell them what they needed to hear.

Alexander remembers the candid conversations he had with Safrit about his views on addiction. He was fully transparent, Alexander says.

“It was almost a calling,” he adds. “The last dozen years or so, he was a hero to many AA folks.”

That was evident in the last days of Safrit’s life. As Safrit lay in the intensive care unit at Novant Health Rowan Medical Center, breathing with the help of a ventilator, many of the people he had helped came to see him.

Alexander says it was a remarkable scene.

“Jake said to me, you could fill Catawba College’s football stadium with people he had helped,” Burgin says. “That may be an understatement.”

The ICU is not a place that accommodates a lot of visitors, but hospital staff had trouble keeping Safrit’s friends away.

“There’s a two-person limit in ICU and actually one person between 6 and 8,” Burgin says, “but people were coming in from everywhere.”

At one point, Burgin counted 11 in the room. The crowd became a bit too rowdy when someone told a Safrit story, and nurses threw everyone out.

But Burgin says it wasn’t long before 11 new people were in Safrit’s room, behaving a bit better.

A Salisbury architect and former city councilman, Burgin spent long periods with Safrit daily, and it almost became a bedside vigil near the end with two of Safrit’s other close friends, Dr. Jessica “Jessie” Blumenthal and her husband, Rob.

Those three were by Safrit’s bedside when he died about 8:20 a.m. Saturday.

The fun-talking, always conversational Safrit, grew up in Salisbury, attended N.C. State University and, as his obituary said Tuesday, he “landscaped some of the finest homes, churches, businesses and industrial properties in and around the Rowan County area for 39 years.”

He majored in landscape design and horticulture science at N.C. State and minored in genetics. Burgin says Safrit regularly gave lectures on genetics over their many meals together.

As a contractor, Burgin says, Safrit did everything by the book and top-notch. Nothing was “secondhand,” Burgin says, and his perfectionist approach sometimes cost him jobs because his bids were too high.

One thing that impressed Burgin was that landscapes Safrit installed were beautiful the first season and were still that way 20 years later.

“I first met Johnny in the second grade at Frank B. John School,” Hap Roberts says. “He was wide open. I admired that. No matter what sport, he was good at it and was always selected first or second in pick-up games.”

Roberts remembers a time when Safrit’s dad took him, Johnny and Robbie Gill to the movies. In the car, Safrit asked his dad to yodel for them.

“He was good!” Roberts says. “I loved it. That night when I got home I tried my hand at yodeling. My dad finally yelled at me to put a cork in it and go to bed.”

Alexander said when he and Safrit were young, in the years they were 9 to 13, Safrit frequently ate dinner at the Alexander house.

“Primarily because my mother loved him,” Alexander says. “Adored him till the day she died.”

Through his life, Safrit often dove deeply into various pursuits with a passion — pastimes such as fishing, golfing and sending friends his “Thoughts for the Day.”

He once took Roberts and Mort Rochelle fishing for striped bass.

“Complete with a guide and all the riggings,” Roberts says, “we set out on the Catawba River about 6 a.m. Over the next several hours, we had more fun than a barrel of monkeys.”

When they finished that day, the men sent their best fish with the guide, who was taking them to a taxidermist.

“Long story short,” Roberts says, “the fish got mixed up. When we got them back, Johnny insisted I take the bigger of the two. Over the years, we joked about it, but that’s the kind of guy Johnny was. Always giving.

“… If you had Johnny Safrit as a friend, you had a true friend.”

Burgin came to  know Safrit in the late 1970s as they crossed paths on various jobs. They didn’t start playing golf together until the 1980s. One day Burgin and his son were playing at Rolling Hills and they asked Safrit, who was playing alone, to join them.

“After that, it was Katie bar the door,” Burgin said.

For many years, during and after Burgin was a councilman, he, Safrit and City Manager David Treme golfed together every Friday afternoon.

These past seven years, the friendship between Burgin and Safrit deepened when Burgin and his wife bought a house for retirement in the Triangle area, while Bill kept working during the week in Salisbury.

Burgin and Safrit started a ritual of eating dinner together every night, Monday-Thursday. They had a different go-to restaurant for each evening.

So there were a lot of conversations, with Safrit doing most of the talking. You can imagine, Burgin says, but Safrit’s stories eventually started to repeat themselves, and Burgin told him so.

“Yeah, but I made it better, so listen up one more time,” Safrit would protest.

Safrit sought out inspirational messages of hope, joy and serenity about 13 years ago when the stock market tanked and the economy soured, Then he started emailing them to his friends.

By 2009, he was sending his “Thought for the Day” to 118 people, and many in turn sent them along to people they knew. Safrit made it a habit he couldn’t break until his computer did, Burgin says.

About two weeks ago, Safrit entered the hospital and had surgery for an abscess on his colon. He and his friends knew the operation would be dangerous. He suffered from COPD from years of smoking and was battling back from double pneumonia.

Burgin said his lung capacity already was at a low percentage. Still, the doctors and nurses tried to give him every chance — the abscess had to be addressed. “It was just Johnny’s time,” Burgin says.

Safrit was strong in his faith and once told Burgin he wasn’t afraid of dying because he had lived a good life.

Safrit also confided to Burgin he would change only two things in his life. Burgin immediately thought Safrit would say he regretted never marrying, or not having children, or becoming an alcoholic.

But Safrit said he wouldn’t smoke and make sure he wore sunscreen.

Burgin will be giving Safrit’s eulogy at the 1 p.m. funeral for Safrit Thursday. He thinks he can get through it.

Alexander will be there will other members of the Everyman’s Bible Class, who members also will be Safrit’s pallbearers.

This past Sunday, he also brought something to the Everyman’s class.