Recent titles has Clemson recruiting at the top 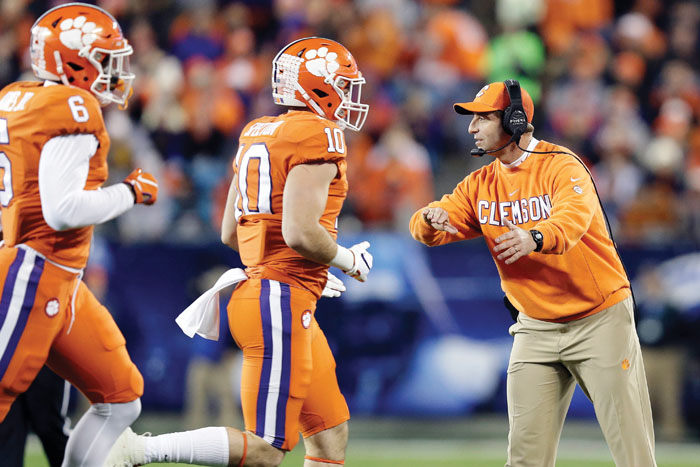 Clemson’s impressive run of recent success on the football field is paying dividends on the recruiting trail.

After winning two of the last three national titles, Clemson is putting together its highest-rated recruiting class ever as high school seniors across the country finalize their college selections during the early signing period that begins Wednesday.

Clemson has verbal commitments from seven of the nation’s top 29 prospects according to composite rankings of recruiting sites  compiled by 247Sports. Clemson leads the 247Sports team recruiting rankings.

But the Tigers have never assembled a class quite like this one. The 247Sports Composite team rankings go back as far as 2008, and Clemson has never finished higher than seventh. This year, Clemson is competing with Alabama and LSU for first place.

247Sports director of scouting Barton Simmons notes that Clemson typically doesn’t have as much roster attrition as other powers, so the Tigers often end up with smaller classes. Simmons also says Clemson sometimes pursues prospects whose star ratings might not accurately measure how they’ll fit into the program.

“In order to ensure they’re getting the right guys from a culture standpoint, they’re willing to take prospects who from a talent level, the Alabamas of the world don’t want,” Simmons said. “This year those guys (who fit) happen to be players who are really good as well.”

Five-star prospects committed to Clemson include defensive tackles Bryan Bresee (ranked No. 1 overall) and Demonte Capehart (No. 24), defensive end Myles Murphy (No. 3), quarterback DJ Uiagalelei (No. 13), running back Demarkcus Bowman (No. 16), cornerback Fred Davis II (No. 26) and outside linebacker Trenton Simpson (No. 29).

Murphy says he isn’t surprised about the talent Clemson has accumulated.

Although the defensive end from Powder Springs (Georgia) Hillgrove says he grew up an Alabama fan, Murphy indicates he started thinking about Clemson after visiting the campus before his sophomore year. Murphy called Clemson “the type of school where they try to make it as much like home as possible.”

“They make it family oriented,” Murphy said. ‘The parents of all the athletes love it there. If the mom and dad like it, that will have a big influence on the athletes. That’s why I’m really not surprised they have a good class like this.”

“That was probably Alabama’s best team that they’ve had over a long time,” Tucker said. “For (Clemson) to just beat them down like that was proving a point to me, that this team is for real. I want to be part of a winning team, that wins national championships. They’ll work me and get me better, bigger, stronger and faster. That’s what I want to be a part of.”

Here are some other stories to watch as the early signing period kicks off.

The top uncommitted prospects are No. 4 Justin Flowe and No. 5 Jordan Burch. Southern California and Oregon are among the schools pursuing Flowe, a linebacker from Upland, California. Burch, a defensive end from Columbia, South Carolina, is considering Georgia, South Carolina, Alabama, Clemson and LSU.

Clemson is first in the 247Sports Composite team standings heading into the early signing period, followed closely by Alabama and LSU. Ohio State, Texas A&M, Georgia, Florida, Oklahoma, Auburn and Texas make up the rest of the top 10.

USC is currently 82nd in the 247Sports Composite team standings, a remarkable turn of events for a program that has never finished outside the top 20. USC could move up quite a bit by February as it remains in play for several notable players.

The early signing period makes it difficult on new coaches who only have a few weeks to salvage their recruiting classes while they also try to put together their staffs. One new coach to watch is Florida State’s Mike Norvell as he tries to restore the Seminoles to national prominence.