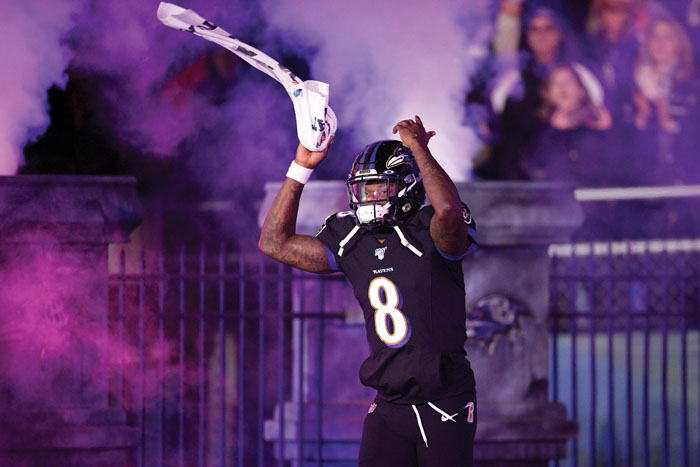 Baltimore Ravens quarterback Lamar Jackson is introduced onto the field prior to an NFL football game against the New York Jets, Thursday, Dec. 12, 2019, in Baltimore. (AP Photo/Nick Wass)

Baltimore tied the record for Pro Bowl players set by Miami in 1973. The NFL released the rosters Tuesday night for the game in Orlando, Florida, on Jan. 26.

“This honor is all about my teammates and our coaches, because without them, the success we’ve had as a team wouldn’t be possible,” Jackson said. “I’m also grateful for all the fans who continue to support us and who have helped make this season so special. Ultimately, it’s about winning, and we still have a lot of work to do before we accomplish our biggest goals.”

Thirty teams had at least one player selected and 24 clubs had multiple players chosen. The New York Giants and Miami Dolphins failed to get any Pro Bowlers. Players on the two Super Bowl teams will withdraw from the Pro Bowl and be replaced.

The Pro Bowl coaching staffs will be from the losing teams in the AFC and NFC divisional playoffs with the best regular-season records.

Other AFC quarterbacks are Patrick Mahomes of Kansas City and Deshaun Watson of Houston. The NFL QBs are Drew Brees of New Orleans, Aaron Rodgers of Green Bay and Russell Wilson of Seattle.

Defensive standouts include Buffalo’s Tre’Davious White, who is tied for the league lead with New England’s Stephon Gilmore with six interceptions. They are the top AFC cornerbacks.

NFL sacks leader Shaquil Barrett of Tampa Bay is on the AFC squad, along with perennial Pro Bowlers Aaron Donald of the Rams and Richard Sherman of the 49ers.

“To make the Pro Bowl, it’s a dream come true,” Barrett said. “That’s the best way I can sum it up. I dreamed of this growing up. It’s a huge honor and I can only hope that I’ll have more to follow.”

“This is a special moment, and while I’ve worked hard to get to where I am in my career, I wouldn’t have been able to do this without my teammates and coaches,” Godwin said. “I’ve had the chance to play alongside some of the best in the NFL, including Mike Evans, and sharing the honor with Mike makes it even better. I’m extremely grateful for this opportunity.”

The acquisition became official on Tuesday after the NFL processed the Saints’ request to claim Jenkins through the league’s waiver system.

The Giants waived Jenkins after he declined to acknowledge wrongdoing when he used offensive language in an exchange with a fan on social media. Jenkins’ official designation was waived-injured because of his minor ankle injury during a Week 14 loss to Philadelphia that dropped the Giants to 2-11.

Now Jenkins joins a Saints team that already has clinched the NFC South for a third straight season and is in the hunt for one of the top two playoff seeds in the NFC heading into its final two regular-season games.

The 31-year-old Jenkins has started all but two games in which he has played during his eight-year career. He made the Pro Bowl in 2016, the year he signed a five-year, $62 million deal with New York.

Jenkins has 22 career interceptions, four this season, tying a career high set as a rookie in 2012 with the St. Louis Rams.

Marshon Lattimore and former Giant Eli Apple have been the Saints’ starting cornerbacks this season, but New Orleans routinely uses five- and six-defensive back formations in passing situations.