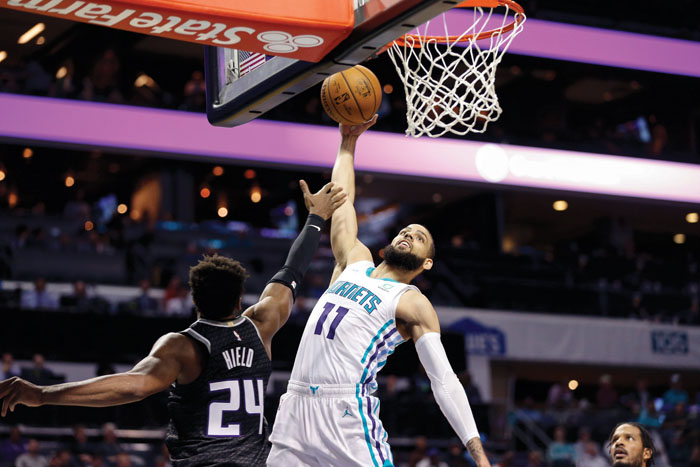 CHARLOTTE (AP) — Malik Monk scored 14 of his season-high 23 points in the fourth quarter, and the Charlotte Hornets spoiled De’Aaron Fox’s return from injury with a 110-102 win over the Sacramento Kings on Tuesday night.

Cody Zeller had 17 points and nine rebounds, and Bismack Biyombo added 10 points and 12 rebounds as the Hornets (13-17) won for the fourth time in five games.

Fox was back on the floor after missing 17 games with left ankle sprain and led the Kings (12-15) with 19 points. He played 30 minutes despite supposedly being on a minutes restriction.

On a night when Devante Graham and Terry Rozier shot a combined 5 of 21 through the first three quarters, the Hornets needed someone to step up.

Monk did that to start the fourth quarter.

He scored eight straight points, including a pair of 3s from the same spot just a few feet left of the top of the key. Graham then started to get going, knocking down two straight 3-pointers and suddenly the Hornets led by 10 with six minutes left as part of a 23-11 run to begin the fourth. Monk added two more on a drive to the hole and then put an exclamation point on the victory, sneaking through the lane and dunking off a missed 3 by Rozier with 42 seconds left.

Monk finished the fourth quarter 5 of 5 from the field, including two 3-pointers. He also made both free throws and had five rebounds in the final period. He finished with a career-high 10 boards.

Kings: Marvin Bagley had 14 points and seven rebounds off the bench in 22 minutes. … Sacramento was outrebounded 51-33.

Hornets: Played without P.J. Washington, who sat out with a broken finger, and forward Nic Batum (hand). … Started both of its centers in Zeller and Biyombo. … Scored 52 points in the paint.

Kings: Travel to Indiana to face the Pacers on Friday night.

Hornets: At the Cleveland Cavaliers on Wednesday for the second night of a back-to-back.

Brogdon dribbled past Dwight Howard and then used the rim to protect the ball as he made the shot. Sabonis followed by hitting one of two free throws with 10.7 seconds remaining.

LeBron James had 20 points, nine rebounds and nine assists but missed a 3-pointer that would have given the Lakers the lead with 11.7 seconds to go. Los Angeles also missed two shots on its final possession while trying to force overtime.

The Lakers looked as though they had taken control with a 9-0 run for a 95-91 lead midway through the fourth quarter. But Indiana responded just as it had all night as the Lakers played without All-Star forward Anthony Davis.

The Pacers charged back, tying the score at 100 on a mid-range jumper from Brogdon with 2:20 left before retaking the lead on two free throws from Myles Turner.

James answered with two more free throws with 1:40 to go and it stayed that way until Brogdon’s decisive layup.

The Lakers were shut out the rest of the way.

Lakers: James scored seven points in the second half — all in the fourth quarter. … Howard had a season-high 20 points.

Pacers: Jeremy Lamb left in the second half with a sore right groin. … Turner had 16 points and seven rebounds, while Brogdon finished with 16 points and six assists. … Sabonis also had 10 rebounds for his 23rd double-double this season. … Indiana was 13 of 20 from the free throw line.

That shouldn’t come as a surprise given his experience working alongside Lakers coach Frank Vogel for three seasons with Indiana.

Vogel hired McMillan as associate head coach in 2013, and McMillan became the Pacers head coach when Vogel was fired after the 2016-17 season.

Hailie Deegan jumps to Ford to fast-tack her racing…