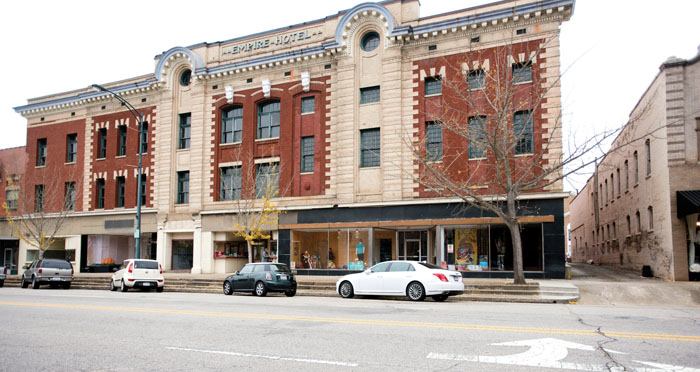 SALISBURY — A couple months ago, Salisbury area officials and residents toured the city’s opportunity zones, including downtown, with a White House official.

Now, Empire Hotel developer Britt Weaver says he will be setting up a qualified opportunity fund to move the restoration project forward.

An opportunity fund allows for investment of capital gains into projects located in opportunity zones, which are census tracts that have low-income communities or are adjacent to them. The fund will allow Weaver to have priority at the U.S. Department of Housing and Urban Development for the Empire Hotel. Weaver says that is big deal for him as a developer.

Weaver told the Post he has the first investment secured. But he’s continuing to work with the city to get a final agreement complete for HUD.

There have been three risks for him: interest rates, state historic tax credits and construction prices.

Weaver said the interests rates are currently low and favorable.

“Assuming that they don’t move significantly, they’re a non-issue right now,” he said.

The state historic tax credit was renewed by the General Assembly this year, so that takes another risk off the table.

The third is construction costs.

“The last thing that is still the hurdle … is the cost of construction prices because until you have a final set of drawings — 100% drawings — you can’t have a contractor say that is your cost,” Weaver said.

“I’m not going to take the Empire down until the construction closes,” he said. “That’s the way a HUD deal works. There’s no incentive to save money and buy it early.”

He said the city deal would save $100,000, but it would risk several million dollars that could come through HUD.

Weaver told the Post the Empire Hotel remains a net positive for Salisbury, despite any detractors.

“It’s a good deal for the city to get the non-performing asset off the books, to bring in vibrant new business,” he said. “We have some pretty neat ideas for what will go in the Montgomery Ward space that will potentially generate not only jobs but attract talent from other places.”

Weaver said he consider local support and interest in the project “remarkable.” He remembers his first tour of the Empire a couple years ago. He expected to see a handful of people come, but was “stunned” by the turnout that was about 180 people.

“I want to get this one done,” he said. “This one is kind of personal.”

He continued, “I have every intention of staying engaged in Salisbury and the nice part about this whole process is getting to know the city leaders here, some of the community figures, engaging folks from all sides of the town.”

Still, the redevelopment remains a “tight deal.” He plans to continue to look for grants to close the funding gap, and told the Post he’s asking for the support of Salisbury’s residents to call state and federal political leaders to tell them the importance of the project to the city.

“I feel like we’re going to leave something a lot better than we found it,” he said.