Final all-conference teams include many from Rowan County 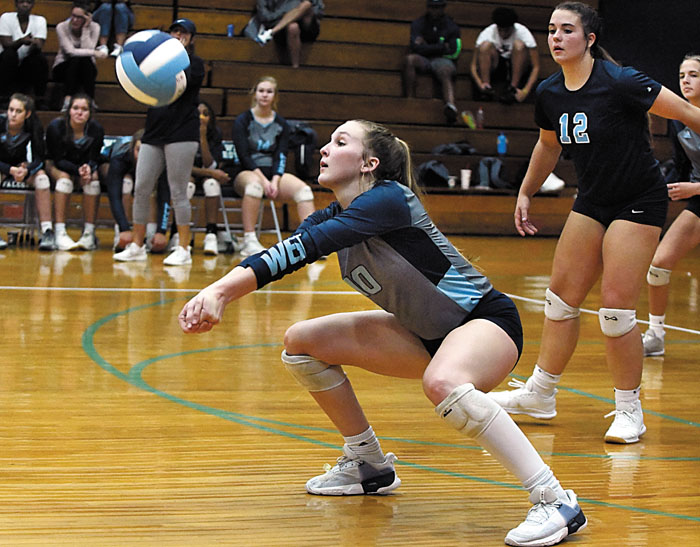 West Rowan's Tori Hester (10) was one of several Rowan County athletes who won Player of the Year honors in their respective sports and conferences. ... File photo by Wayne Hinshaw/ for the Salisbury Post

SALISBURY — The two Rowan County members of the 10-school Central Carolina Conference brought home an unusual amount of coach of the year and player of the year awards for fall sports.

While the announcement of those awards is traditionally withheld until the last school finishes  (they were released immediately by the league shortly after Salisbury lost in Saturday’s 2AA football state championship game), they actually are voted upon by the league’s coaches back in November, at the end of the regular season.

Some were upset about Salisbury’s Brian Hinson not being honored as coach of the year for the CCC, but you have to remember when the vote was taken. When coaches cast their ballots, Salisbury was just one of the three teams that tied for second place in the CCC. Mark Holcomb, who led Oak Grove to the CCC regular-season championship, tied for second in the voting with Hinson. The leading vote-getter for coach of the year, Thomasville’s Doug Robertson, led his team on an amazing run at the end of the regular season. Robertson’s Bulldogs were the one of the teams that wound up tied for second with Salisbury.

The CCC introduced a new football award this season — “Lineman of the Year.”

So it’s a worthy award. Salisbury junior defensive lineman Zae Clay is the inaugural winner. He had three sacks in the state championship game, so the CCC coaches made a good choice for their first honoree.

Salisbury, not surprisingly, also had the CCC’s defensive player of the year — senior linebacker Jabril Norman, who led a terrific defense.

Most conferences don’t release who was runner-up in the voting for a particular award, but the CCC is an exception. Salisbury junior back Mike McLean, who accounted for over 1,500 rushing yards, was runner-up for offensive player of the year behind Oak Grove’s Aiden Shewcow, who had 1,867 rushing yards and 25 rushing TDs.

Counting Clay, Norman and McLean, the Hornets had 11 players make the all-conference team, including seven on defense. That was more than any school. Oak Grove had nine.

In volleyball, South Rowan dominated the CCC all season long, going 18-0 in the league.

In girls tennis, Salisbury went undefeated in the CCC.

Salisbury’s No. 1 player,  junior Lillie Rusher, was voted the league’s player of the year.

Five Hornets made the All-CCC team.

South had four of the top 15 runners.

See Page 2B for all the All-CCC players from the Rowan schools and the award winners for all fall sports.

The awards for fall sports in the NPC were announced in early December, with football released right after West Rowan’s third-round loss to Charlotte Catholic in the football playoffs.

In case you missed it, West Rowan, Carson and East Rowan, the three Rowan schools in the six-team NPC, had numerous award winners.

In football, West Rowan running back Jalen Houston, who scored 22 touchdowns and rushed for 1,850 yards, was voted the league’s offensive player of the year.

The NPC is one of the leagues that recognizes a special teams player of the year. That award went to West Rowan kicker Federico Cruz, who produced nine field goals and 46 PATs.

It was a remarkable fall for Cruz, who also made All-NPC soccer.

Carson junior Lindsey Conrad was named NPC Player of the Year for girls tennis after the Cougars ran the table in the league.

League champ West Rowan swept the top honors in NPC volleyball, with All-State senior Tori Hester named player of the year and Jan Dowling , who was the coach of the year for all of 3A, taking the league coaching honor, as well.

West Rowan’s Scott Foster, who led the Falcons to the NPC championship in boys cross country, was honored as the league’s coach of the year.

Carson senior Zac Barbee, the NPC champ, was the league’s runner of the year.

Carson’s Les-lee Ihme, who guided the Cougars to another league title, was honored as the NPC’s coach of the year.

Carson senior Sophia Brown, was the conference’s golfer of the year.

North Rowan represents Rowan in the Yadkin Valley Conference, which has seven schools competing in football, but has nine schools involved in the other fall sports.

The Cavaliers, who went undefeated in the league and reached the third round of the 1AA state playoffs, swept football honors. Senior linebacker Jordan Goodine got the defensive award. Senior running back Malcolm Wilson was voted the top offensive player. Ben Hampton was recognized as coach of the year.

Ten Cavaliers made All-YVC in football.