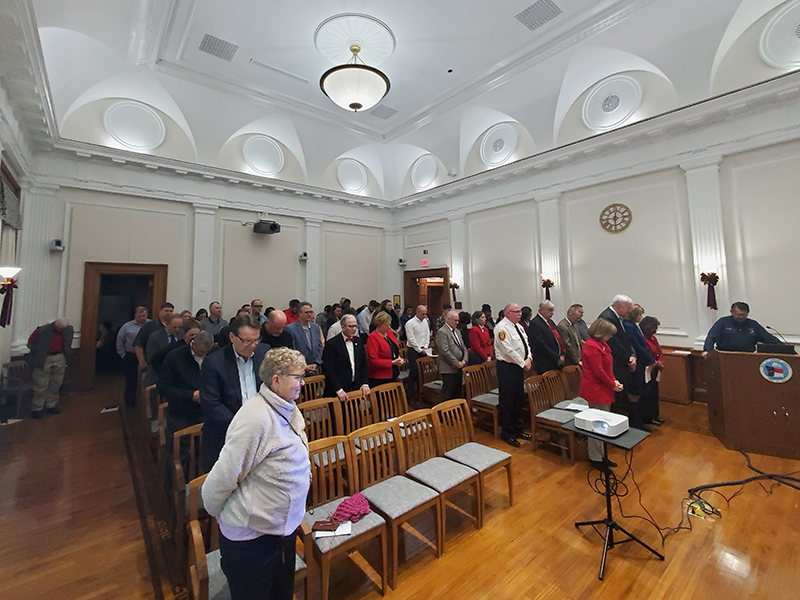 Josh Bergeron / Salisbury Post - A crowd of people attended Monday’s Rowan County Commissioners meeting, many of whom spoke in favor of the bond referendum.

SALISBURY — By giving their approval to a $45 million bond referendum Monday, Rowan County commissioners moved closer to building an economy that works for their grandchildren, said Craig Lamb, vice president of Corporate and Continuing Education at Rowan-Cabarrus Community College.

Lamb was one of several people who spoke in favor of the bond referendum during a public hearing. There were no speakers in opposition. With $45 million, the college would build a fire decontamination facility, a building for Rowan County Early College and other high school students as well as capacity for the college’s automotive, welding and machining programs. The bond would require a 3-cent property tax increase, with debt incurred being paid over 15 years.

Echoing sentiments made by public speakers, commissioners unanimously approved a resolution that puts the referendum on March’s ballot.

“We need a higher educational level for the population of Rowan County to meet the needs of 21st-century jobs,” said Commissioners Vice Chairman Jim Greene “ … This is one of the most important votes I’ve taken in the last six years.”

While commissioners’ support was necessary for the measure to appear on the March ballot, other institutions have offered their endorsement. The Rowan County Chamber of Commerce approved a resolution of support on Monday. The Rowan-Salisbury School Board did the same one month earlier. The Rowan-Cabarrus Community College Board of Trustees gave their support to the bond referendum earlier this year, too.

Chip Short, chairman of the Rowan-Cabarrus board, said construction funded by the bond would, among other things, add capacity for an additional 40 welding students and other high-wage, high-demand career paths.

That means more space for welding students like Grace Peters. A second-year student from China Grove, Peters said she likes working with her hands and isn’t excited by desk jobs. She hadn’t welded before entering the Rowan-Cabarrus program and worried about being a woman in a male-dominated field. Now, Peters said, she feels welcome.

With more welding booths at Rowan-Cabarrus, there will be more students with credentials for jobs that have an average salary of $50,000, she said. There may be more female welders, too, Peters said.

Salisbury Fire Chief Bob Parnell told commissioners firefighters face a higher risk of cancer than the general population despite wearing protective gear. It’s not unusual to fight a fire, take shower and still smell like that fire the next day, Parnell said.

The decontamination facility, he said, would teach firefighters how to properly remove their gear.

It would be “groundbreaking and life-saving,” he said.

Jeanne Dixon, who sits on the Rowan-Cabarrus Board of Trustees, reminded county commissioners they had not invested in a new building at Rowan-Cabarrus in 42 years.

President Carol Spalding said, “Now is the time to prepare the workforce to meet these new opportunities that lie ahead.”

Commissioner Mike Caskey said community colleges are underutilized and that he believes future generations would see them as more affordable than going straight to four-year schools. Caskey said he was glad to see the inclusion of a fire decontamination facility.

“The bottom line for me is we have got to raise the ceiling of education in Rowan County,” Edds said.

Commissioner Craig Pierce made the motion and Commissioner Judy Klusman offered the second to approve a resolution and put a referendum on March’s ballot.

County staff must now deliver ballot language to the Rowan County Board of Elections by Dec. 19, 2019. The bond won’t be officially approved until a majority of voters say “yes” to the following question:

Shall the order of the County of Rowan authorizing $45 million general obligation bonds plus interest, for the purpose of financing, in part, the acquisition, construction, installation, renovation and quipping of educational facilities of Rowan-Cabarrus Community college and providing that additional taxes may be levied in an amount sufficient to pay the principal of and interest on such bonds be approved?