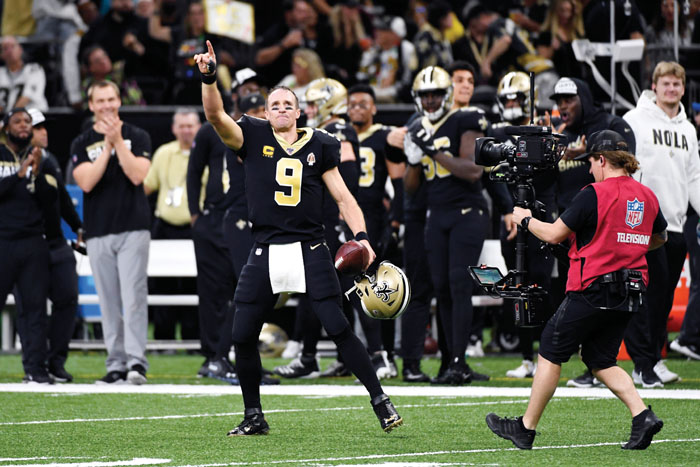 By BRETT MARTEL AP Sports Writer
NEW ORLEANS (AP) — Drew Brees became the NFL’s all-time leader in touchdown passes, throwing for four scores to lead the New Orleans Saints to a 34-7 victory over the Indianapolis Colts on Monday night.
The scoring strike that broke Peyton Manning’s record of 539 career touchdown passes came in the third quarter, when Brees hit tight end Josh Hill for a 5-yard score. Brees’ next pass in the game was the 541st scoring toss of his career, a 28-yard TD to reserve QB and utility player Taysom Hill that put the Saints up 34-0.
Brees came into the game already holding NFL records for completions with 6,792 and yards passing with 72,577 — and built on those numbers by also setting a record for completion percentage in a game. He completed 29 of 30 passes — 96.7% — for 307 yards before being relieved by Teddy Bridgwater in the fourth quarter. That broke the mark Philip Rivers had held since completing 28 of 29 (96.6%) against Arizona last season.
The victory kept the Saints (11-3), who’d already won the NFC South, in the running with San Francisco (11-3) and Green Bay (11-3) for one of the top two seeds in the NFC playoffs. The Colts (6-8) were eliminated from playoff contention after losing their fourth straight and sixth out of seven.
Jacoby Brissett struggled at times with accuracy and finished 18 of 34 for 165 yards against a Saints defense looking for redemption after allowing 48 points in a loss to the 49ers a week earlier.
Meanwhile, Colts defenders had no answer for Michael Thomas, who caught 12 passes for 128 yards, including a 15-yard touchdown. Thomas’ eighth game this season with at least 10 catches give him 133 for the season, which is also the fourth-highest single-season total in NFL history.
With four more catches, Thomas will pass Antonio Brown and Julio Jones for second most in a season and needs 11 to eclipse Marvin Harrison’s record of 143 from 2002.
Tre’Quan Smith caught a 21-yard touchdown pass for New Orleans.
Jordan Wilkins scored the Colts’ lone TD on a 1-yard run in the fourth quarter.
INJURIES
Colts: Reserve safety Rolan Milligan left the game with a foot injury in the first half. Cornerback Quincy Wilson left with a shoulder injury.
Saints: Right guard Larry Warford needed help to the sideline with a left knee injury early in the third quarter. Defensive back C.J. Gardner Johnson left the game with a concussion in the fourth quarter.
UP NEXT
Colts: Host Carolina on Sunday.
Saints: Visit Tennessee on Sunday.
___
More AP NFL: https://apnews.com/NFL and https://twitter.com/AP_NFL