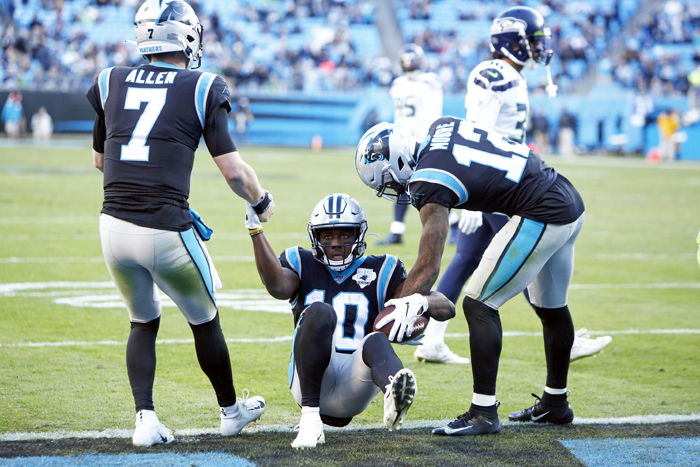 By STEVE REED
AP Sports Writer
CHARLOTTE — Russell Wilson had done just about everything right for 3 1/2 quarters when the Seattle Seahawks asked their star quarterback to make one more big play.
And, as he’s done so many times in the past, Wilson responded.
On a third-and-11, Wilson rolled out and completed a 14-yard strike to Tyler Lockett for a first down with two minutes remaining. That helped the Seahawks nullify two offensive holding calls on the drive and run out the clock to beat the Carolina Panthers 30-24 on Sunday and avoid squandering a 20-point fourth quarter lead.
“Russell is a guy who creates magic,” said Seahawks running back Chris Carson.
Wilson completed 20 of 26 passes for 286 yards and two touchdowns, Carson ran for 133 yards and two scores, and the Seahawks inched closer to clinching a playoff spot. Seattle (11-3) can wrap up a postseason berth for the seventh time in the last eight seasons with a Rams or Vikings loss. Both teams play later Sunday.
“That’s what the league talks about with Russell — the way he extends plays,” said Panthers safety Tre Boston. “It’s the play after the play with him. And he hurt us.”
“It’s championship football time,” Wilson said. “You have to capitalize on your moments.”
It was the 100th regular-season win for Seahawks coach Pete Carroll.
“You can see how Russ maneuvers and makes stuff happen because he and Tyler were just phenomenal together,” Carroll said. “And it’s really been a while. Tyler’s been working his way back and you could see it. … He came through in great fashion, so it’s great to have him back because we are going to need him to finish up.”
Seattle scored on its first three possessions as Wilson completed 8 of 10 passes for 175 yards, with 19-yard touchdown passes to DK Metcalf and Lockett for a perfect 153.8 QB rating. Carson added a 16-yard TD run as the Seahawks built a 20-7 lead at halftime.
Lockett would finish with eight catches for 120 yards.
But Seattle had to hold on after nearly surrendering a 30-10 lead with 7:28 left in the game.
Carolina got two touchdowns as Christian McCaffrey scored on a 15-yard run and Kyle Allen found Curtis Samuel for a 5-yard score to make it a one-possession game with 3:19 left.
Despite the loss, McCaffrey continued his impressive season for Carolina (5-9), racking up 165 yards and two more touchdowns, giving him a league-high 18 for the season. McCaffrey also became the first Carolina player to eclipse 2,000 yards from scrimmage in a season.
Turnovers continued to plague the Panthers. The Panthers are now minus-14 in turnover differential during their current six-game losing streak. Allen added to that total on Sunday as the Seahawks intercepted the second-year QB three times — two by K.J. Wright and one by Bobby Wagner.
“We made some mistakes and gave them an opportunity to score early in the ballgame,” Panthers interim coach Perry Fewell said. “When you get behind early in the ballgame against an 11-3 football team and you’re a struggling football team, that’s tough. That’s really tough.”
For Allen, it was another case of trying to do too much. Under heavy duress and his team trailing 20-10 in the third quarter, he tried to force a pass and he was falling to the ground and was picked by Wright.
Wilson, on the other hand, was poised in the pocket, repeatedly making the right decisions as well as making big throws when the Seahawks needed them. Carolina’s only takeaway came when the Seahawks tried to get tricky and wide receiver Josh Gordon threw an interception off a reverse.

TARGETING JACKSON
Wilson repeatedly targeted Panthers second-year cornerback Donte Jackson in the first half, beating him for two scores and a 58-yard pass play down the seam to Gordon, who stretched out to make a sensational grab. After Jackson allowed a touchdown pass, Fewell was seen talking to Jackson on the sideline trying to calm him down and get him refocused on the game.
He said he considered benching Jackson, but stuck with him.

SEAHAWKS INJURIES
The Seahawks have some healing to do.
They played without defensive ends Ziggy Ansah and Jadeveon Clowney, cornerback Shaquill Griffin and tight end Luke Wilson, and safety Quandre Diggs left in the third quarter and Wagner in the fourth. Carroll said after the game that both suffered ankle injuries, but said it appears that Diggs’ injury may be worse.
Clowney didn’t make the trip to Carolina after becoming ill on Friday.
“It’s a great statement for our team to go out and win games with other guys playing for us,” Carroll said. “It gets them closer to helping us when we need it down the stretch.”

PANTHERS QB SITUATION
Fewell said he will evaluate Allen’s performance on film before deciding whether he will start next week at Indianapolis or the team will give rookie Will Grier a chance to play.
Allen was distraught after the game, taking blame for his part in the team’s sixth straight loss.
“I put us in bad positions,” said Allen, who fell to 5-7 as a starter this season. “I’m turning the ball over too much and I’m not helping this team win.”

UP NEXT
Seahawks: return home to face the Cardinals next Sunday. Seattle beat Arizona 27-10 earlier this season.
Panthers: travel to face the Colts on Sunday, their final away game of the season.
___
More AP NFL: https://apnews.com/NFL and https://twitter.com/AP_NFL