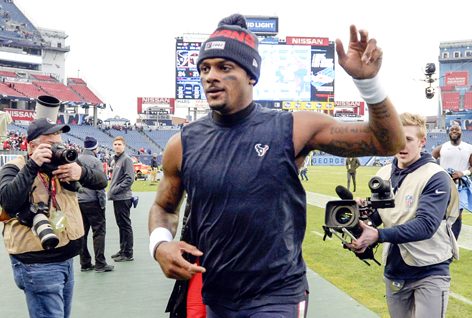 By The Associated Press
NASHVILLE, Tenn. — The Houston Texans grabbed control of the AFC South by beating the Tennessee Titans 24-21 Sunday.
The defending division champs are looking for Houston’s fourth AFC South title in six years under coach Bill O’Brien. The Titans haven’t won this division since 2008, and Mike Vrabel is Tennessee’s third coach since then.
Ka’imi Fairbairn kicked a 29-yard field goal with 3:26 left for the winning points.
The Texans (9-5) nearly blew a 14-0 halftime lead. Deshaun Watson threw for 243 yards and two touchdowns, but Tennessee also intercepted him twice inside the Titans 1.
The Titans (8-6) snapped a four-game win streak with only their second loss in seven games. Now they will need help in the final two games to earn their second playoff berth in three seasons.
When the Titans tied it at 14 early in the fourth quarter, the Texans scored 10 straight points. Carlos Hyde ran for a 10-yard TD, then Fairbairn’s field goal finished Houston’s scoring.
Ryan Tannehill hit Dion Lewis with an 11-yard TD pass with 2:04 left to pull Tennessee within 24-21. But the Titans used backup kicker Ryan Santoso on the onside kick, and the ball only went 7 yards before being smothered by Texans safety Justin Reid.

PACKERS 21, BEARS 13
GREEN BAY, Wis. — Aaron Jones ran for two scores, Davante Adams caught another in the 200th edition of he NFL’s oldest rivalry.
With the win, the Packers (11-3) swept the regular-season series between the teams for the 15th time in the last 26 seasons and the seventh time in the last 11 seasons. Green Bay defeated Chicago 10-3 in the season opener.
Green Bay now leads the all-time series 99-95-6. The Bears (7-7) saw their three-game win streak end.
The Packers improved to 19-5 against their NFC North rival with Rodgers as the starting quarterback. Rodgers completed just 16 of 33 passes for a pedestrian 203 yards but did enough to secure the victory. The two-time MVP entered the day with a 103.2 career passer rating against the Bears, the highest in league history of quarterbacks with at least 250 passes against Chicago. He had a 78.2 rating on Sunday.
Mitchell Trubisky completed his first five pass attempts for the Bears but for only 18 yards. Chicago’s offense opened the game with three straight punts and a turnover on downs. Trubisky finished 28 of 53 for 321 yards, a touchdown and two interceptions.

PATRIOTS 34, BENGALS 13
CINCINNATI — Tom Brady threw a pair of touchdown passes to move within one of the NFL career record, Stephon Gilmore returned one of his two interceptions 64 yards for a score, and the Patriots clinched a playoff berth.
A week that started with intrigue — a Patriots crew videotaping the Bengals’ sideline in Cleveland — concluded with more New England history. The Patriots have made the playoffs 11 consecutive seasons, extending their NFL record.
Brady had touchdown passes of 23 and 7 yards that left him with 538 for his career, one shy of Peyton Manning’s record.
The Patriots (11-3) haven’t been as overwhelming in this playoff push, getting just enough out of the 42-year-old Brady and more than enough out of the league’s top-ranked defense.
Thousands of Patriots fans filled the stadium and chanted Brady’s name as the minutes ran off. Brady was 15 of 29 for 128 yards and a pair of sacks.
The Patriots broke a two-game losing streak with four interceptions in the second half.
Gilmore picked off Andy Dalton twice in the third quarter, with his second pick-6 of the season putting New England in control. The Patriots pushed their league-leading interception total to 25. The Bengals (1-13) got a touchdown pass from Dalton that ended a streak of 20 straight games without reaching the end zone on their opening drive. All they managed the rest of the way was a pair of field goals.

CHIEFS 23, BRONCOS 3
KANSAS CITY, Mo. — Patrick Mahomes threw for 340 yards and two touchdowns, and Tyreek Hill and Travis Kelce were on the receiving end of many of his biggest throws, as the AFC West champions romped to remain in the hunt for the No. 2 playoff seed and a potential first-round bye.
Like a bunch of kids getting a snow day from school, the Chiefs enjoyed every minute of it.
Hill caught five passes for 67 yards and both scores, and Kelce hauled in 11 catches for 142 yards to become the first tight end in NFL history with four consecutive 1,000-yard receiving seasons, helping the Chiefs (10-4) beat the Broncos for the ninth straight time. Denver (5-9) hasn’t won in Kansas City since Sept. 17, 2015.
The Chiefs outscored their longtime division rival 53-9 this season.
Whether it was the snowy weather or the suddenly stout Chiefs defense, the Broncos were so inept offensively that Kelce had more yards receiving at the start of the fourth quarter than they had total offense (139 yards). Phillip Lindsay was bottled up on the ground, and former Missouri standout Drew Lock — who grew up in the Kansas City suburb of Lee’s Summit, Missouri — spent most of the day seeing red jerseys bearing down on him. The rookie quarterback was 18 of 40 for 208 yards and an egregious interception in the end zone.

EAGLES 37, REDSKINS 27
LANDOVER, Md. — Carson Wentz recovered from a late fumble by leading a 75-yard, go-ahead scoring drive and throwing his third touchdown pass of the day to keep the Eagles’ NFC East hopes on track.
Wentz threw TD passes to running back Miles Sanders, tight end Zach Ertz and receiver Greg Ward and was 30 of 43 for 266 yards. The 4-yard pass from Wentz to Ward with 26 seconds left put Philadelphia up for good and electrified a stadium full of green-clad Eagles fans.
Wentz’s ability to bounce back from some accuracy issues and a turnover means the Eagles (7-7) are still in the thick of the division race with a game against the division rival Dallas Cowboys coming next week.
Of course, Wentz didn’t do it by himself. Sanders rushed for 122 yards and a touchdown and caught six passes for 50 yards. The Eagles defense that struggled to stop Washington’s Dwayne Haskins most of the afternoon got him to fumble for a touchdown return by Nigel Bradham on the game’s final play.
Coming off an overtime victory against Eli Manning and the New York Giants, a loss to Washington (3-11) could’ve had the Eagles facing elimination next week.

GIANTS 36, DOLPHINS 20
EAST RUTHERFORD, N.J. — Two-time Super Bowl MVP Eli Manning threw two touchdowns in what might have been his final home start for the Giants and New York snapped a franchise record-tying nine-game losing streak.
Saquon Barkley ran for 112 yards and scored two walk-in touchdowns and New York’s much-maligned defense added a safety as the Giants (3-11) handed the Dolphins (3-11) their second loss in as many weeks at MetLife Stadium.
Manning, who lost his starting job to first-round draft pick Daniel Jones in Week 3 and got it back last week when the rookie sprained an ankle, threw a 51-yard scoring pass to Golden Tate in the second quarter. He threw a go-ahead 5-yarder to Darius Slayton on the opening series of the second half. The 38-year-old also threw three interceptions, two of which set up by field goals by Dolphins kicker Jason Sanders.
With 1:50 left, Manning (20 of 28 for 283 yards) was taken out by coach Pat Shurmur and replaced by Alex Tanney, drawing his second standing ovation from those left in the crowd. He walked to the sideline and was congratulated by teammates while the crowd chanted “Eli Manning.” He even smiled.
Ryan Fitzpatrick, whose game slipped after taking a big hit on a third-quarter scramble, threw two touchdowns to DaVante Parker, the second one with the game out of reach.

BUCCANEERS 38, LIONS 17
DETROIT — Jameis Winston became the first player in NFL history to throw for 450 yards in consecutive games. Winston threw three touchdowns in the first half — four overall — and a career-high 458 yards one week after throwing for 456 yards.
The Buccaneers (7-7) have won four straight and five of six, but their surge started too late for them to get in the playoffs race.
Detroit (3-10-1) has dropped seven games in a row and 10 of 11, increasing the scrutiny of embattled coach Matt Patricia.
The Lions looked like they were still competing for their coach, and themselves, after falling behind 21-0 in the first half. Running back Wes Hills, signed Saturday, ran for a second TD early in the fourth quarter to cut Tampa Bay’s lead to 24-17.
The comeback hopes ended with a thud.
Sean Murphy-Bunting returned an interception 70 yards for a score and a 14-point lead. Winston followed with his fourth TD pass, connecting with Breshad Perriman for a third time.
___
More AP NFL: https://apnews.com/NFL and https://twitter.com/AP_NFL