‘Hope for our country’: All graves covered in wreaths at Salisbury National Cemetery 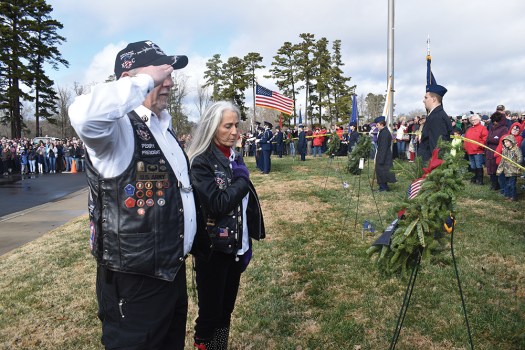 Perry Kelser, president of Rolling Thunder Chapter 6, and his wife Nancy Kelser place a ceremonial wreath to honor of the 93,129 service member from all branches that are missing in action or prisoners of war. 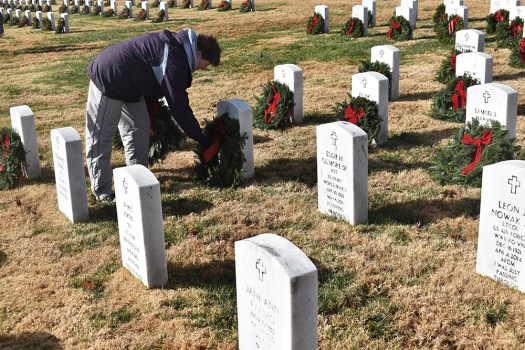 Frances Durham places a wreath at Salisbury National Cemetery Annex. Both her parents are buried at the cemetery. 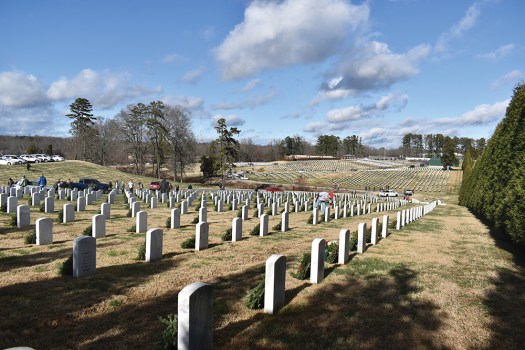 All 9,500 gravestones at Salisbury National Cemetery Annex had a wreath placed on it Saturday for National Wreaths Across America Day. 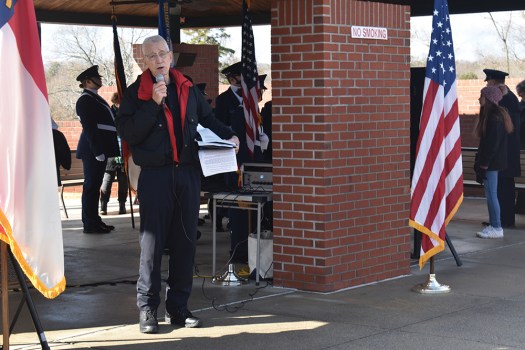 Ronnie Faggart, the Wreath Across America location leader for Salisbury National Cemetery Annex, showed his gratitude to all of those who served.

SALISBURY — Every veteran buried at Salisbury National Cemetery Annex received a wreath on their gravestone Saturday.

It was as a historical day, as all 9,500 veterans were honored, said Wreaths Across America location leader Ronnie Faggart.

“We have never ever in the history of the program been able to have enough wreaths for every veteran resting here,” Faggart announced to a crowd of veterans and families.

The crowd erupted in applause.

“That happened because of you guys,” he said.

That so many veterans without a wreath breaks your heart, he said.

He shared a story from last year’s Wreaths Across America commemoration: a little girl came up to one of the organizers and asked why her grandfather didn’t get a wreath.

“‘Mister, I see all these pretty wreaths out here in the cemetery, but there are so many that don’t have one,’” Faggart recalled. “‘Could you tell me why my grandpa didn’t get one?’”

It cut him to the bone.

This year, the wreaths donated actually surpassed the gravestones, with leftovers will go to the Historic National Cemetery.

“This is good work,” Faggart said.

He said it shows the many groups and families that donated have the same goal: “all veterans are honored.”

“We show a united front of gratitude and respect across the United States of American as we remember the fallen, honor those who serve and their families and teach the next generation the value of freedom,” Faggart said Saturday.

The audience observed the presentation of seven ceremonial wreaths for the branches of military and those who are prisoners of war or missing and action.

After the volleys were fired and taps played, the crowd dispersed throughout the cemetery to place a wreath on all the gravestones.

Faggart asked the audience not only to put a wreath at the gravestones of those with a cross, but to say the veteran’s name out loud and thank them for their service.

“We’re not here today to decorate graves,” he said, “but to celebrate their life and be grateful for their service.”

Sisters Frances Durham, of Winston-Salem, and Donna Gerlach, of Barnesville, Va., placed wreaths at both of their parents’ grave sites. Both served in World War II — their mother in the Navy and father in the Army.

Gerlach said it was beautiful when half of the graves were covered, but this year was unbelievable.

“There’s hope for the country,” she said.

The pair said their parents would be grateful if they were still alive to see the tribute to them and other veterans.

Faggart said those wanting to get involved in Wreaths Across America should visit wreathsacrossamerica.org.