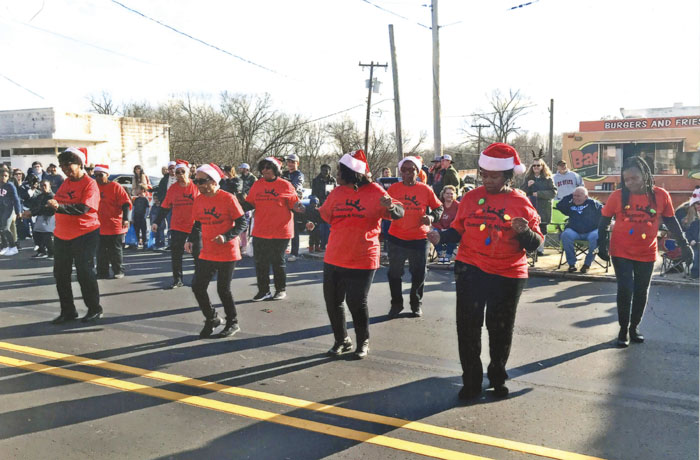 The dance that earned the Queens and King the Regular Winner Award at the Cleveland Christmas Parade on Dec. 7 was the “Trail Riders Shuffle.” Submitted.

The dancing Queens and King of Salisbury recently entertained the residents at the VA Medical Center in the Atrium of Bldg. 42.
They performed four dances: “Ms. Jody Thang,” “Trail Riders Shuffle,” “Cupid Love Slide,” and “Work it out.”

A Christmas prayer was given by Queen Phronice and music was provided by Kia Brice.
The group was invited by VAMC staff Aleshia Brandon and head nurse Tiffany to perform. The dance group is sponsored by the City Parks and Recreation Department under the auspicies of the Healthy Rowan Coalition.

The dance group was initiated two years ago as a project of the Healthy Rowan Coalition.
According to Healthy Rowan, Rowan County ranked 73 of 100 counties in North Carolina in health outcomes, which means 27th from the bottom. Surrounding counties such as Iredell, Stanley, Davie ,Davidson, Cabarrus had much higher health ratios than Rowan.

Members of the Healthy Rowan Coalition, headed by Alyssa Smith, meet once a month and have, over the last two years, initiated many health programs for youth, adults and seniors and have steadily moved higher in health ranking among the 100 counties in North Carolina.
The linedance members practice at Halls Gym on Tuesdays and Thursdays from 10 a.m. until noon. All seniors (age 55-85) desirous of line dance exercises may attend free of charge. Each member of the performing line dance group has acquired a coordinator position.

The Queens are scheduled to entertain the residents at Oak Park Retirement Home, Carolina Nursing Facility and Acordius Nursing Home during the Christmas holidays .
In addition, the group performed in the Cleveland Christmas Parade on Dec. 7, and was named the “Regular Winner” for the whole parade. They danced in red shirts embossed with the Queens logo and black pants, topped with Santa Claus hats.