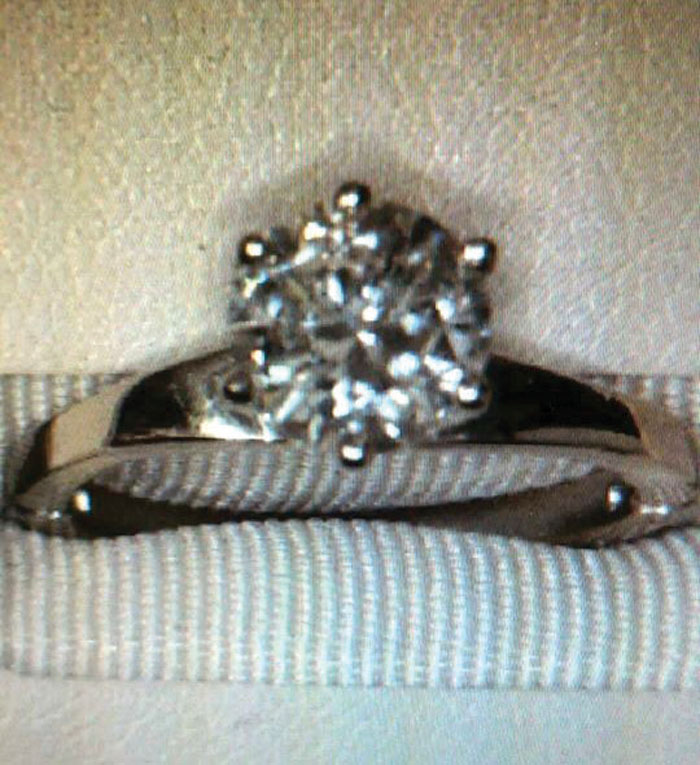 Submitted photo This photo, taken during an appraisal several years ago, shows the engagement ring a Salisbury woman lost a week ago, possibly while shopping at a Dollar Tree store.

SALISBURY — A 93-year-old Salisbury woman holds out hope a precious diamond engagement ring, which she thinks was lost in or near the Dollar Tree store in Wallace Commons, makes its way back to her.

Her late husband gave her the ring decades ago to replace her original engagement ring.

She and family members have been looking for it, asking if anyone has turned it in and hoping for word of its recovery since the ring was lost last Sunday afternoon.

Salisbury Police are asking people to take up the search, too.

On the department’s Facebook page, they’ve posted a photograph of the one-and-a-half carat sapphire ring with a white-gold adjustable band.

The picture was taken during an appraisal several years earlier.

“Let’s pass this around and see if we can make her have a wonderful holiday by having the person that found it return it to her,” the Salisbury Police post says.

The Facebook plea had drawn some 152 comments from people as of Friday afternoon, folks sending up prayers, promising to share the post and offering advice on possible places the Salisbury woman did not look to find the ring.

For purposes of this story, the woman’s name will be Fran, not her real name. She and her family want to protect her identity.

They and the police are asking anyone who finds the expensive ring to contact the Police Department at 704-638-5333 or take it to police headquarters at 130 E. Liberty St.

Fran still has her wedding band, which also has an adjustable band. She requires the adjustable bands for help in navigating the swollen knuckles of her arthritis.

Fran last remembers seeing the ring in the Dollar Tree store at 1349 Klumac Road last Sunday afternoon while shopping for a few items.

“I was putting that stuff away (back home), looked down and my ring was gone,” Fran says.

She and her youngest son looked everywhere — her purse, coat pockets, the Dollar Tree shopping bags, her car. “I’m convinced it’s not in the house — I hope I’m wrong,” she said.

That same afternoon, Fran drove back to the Dollar Tree, where Salisbury Police Detective Jacob Easler happened to overhear her conversation with the store manager.

No one had turned a ring into the store, and the manager and all three employees at the store had nothing to report, either. Fran scoured the parking lot, looking for the ring.

Easler checked whether the store had any surveillance video that would be helpful. Nothing was available.

From her home Friday, Fran said she has lost weight recently and maybe that helped in making her sapphire loose. It had never fallen off her ring finger before.

“I think it just slipped off,” she said.

Fran said she likes to take off her rings when she’s cooking or doing various chores at her home, located in a retirement community.

Fran still drives and plays bridge regularly. Her husband of almost 60 years died eight years ago. He would have been 100 this year and was a chemical engineer who worked as a purchasing agent for Alcoa during a long career.

The lost ring is something Fran and her husband could never have afforded when they were first married. He bought it years later, after the kids were grown and his job had taken the couple to Perth, Australia, for four years.

On a vacation home to see her family in New Orleans, Fran’s husband bought the much fancier engagement ring at the highly reputable Adler’s jewelry store.

So the ring means a lot to Fran, and she has not given up that someone will find it.

“It would be a miracle,” she said, “but I hope for miracles sometimes.”