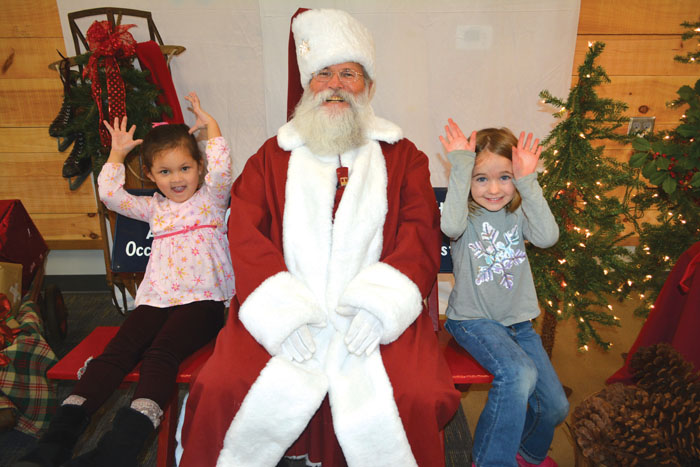 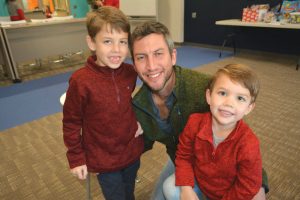 Breakfast with Santa has become a family tradition for Marianna and Kiel Jarrett and their sons, Waylen and Wyatt.
Photo by Susan Shinn Turner

Smart Start Rowan began hosting Breakfast with Santa three years ago, and it hasn’t taken long for the event to become an annual holiday tradition for local families.

The breakfast continues to be held in the Pit at St. John’s Lutheran Church. This year’s breakfast was on Dec. 7. 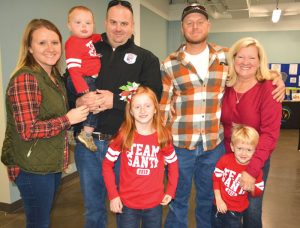 Serenity May, 3, was jumping up and down with the energy only a 3-year-old has. She was holding a certificate — laminated! — proclaiming her a member of the Nice List.

It was the first time that Dennis and Kathy Ingold and some of her children and grandchildren attended.

“It’s awesome,” she said. “It’s so special. The food was delicious, Santa was great, and the fun they are making for the kids is phenomenal.”

Peyton Hand and her little brother, Grayson Franklin, enjoyed making crafts together, although Grayson seemed a bit more interested in a tiny balloon someone had blown up for him.

“They had a great time,” said their mom, Beth Franklin. “This is a nice event. We live outside Charlotte, but our family is here.

Some 15 volunteers from Smart Start Rowan and their teenage children were on hand throughout the day to help wherever they were needed. 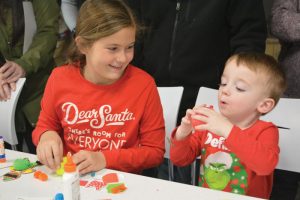 Two of those volunteers were friends Emma Ehmann, 17, and Emily Domenech, 19.

And you’re never too old to sit on Santa’s lap, as the two friends did, along with the Smart Start Rowan staff members who posed together for a group shot with Father Christmas. Casey Propst of Solid Image Photography donated her services for the morning.

Thus far, the event has been a sellout every year, Jarrett said. This year, about 75 children, parents, and grandparents attended.

“The first year it snowed,” Jarrett noted, “so we are happy for good weather so Santa could get here. We have families who have made this an annual tradition. Lots of staff kids come and help. It’s an outreach to get people to learn about Smart Start Rowan.”

“Families can come to the playroom any time during those hours and sign in at the front desk. Over the summer, we had two moms who met there with their kids because it was just too hot to play outside. It’s been a nice gathering spot.”

“We see the families grow up there,” said Bianca Munoz Norman, who greets families at the front desk.

At the end of the morning, Jason Masingo and his daughter, Ava, walked out the front door, but not before Ava said thank you to Smart Start Rowan staff members for hosting.

Her father carried a whole stack of crafts.

“She made one of everything,” he said.

“We’re so appreciative of our dedicated staff and volunteers, including Santa himself, who help to make Breakfast with Santa so successful each and every year,” she said.