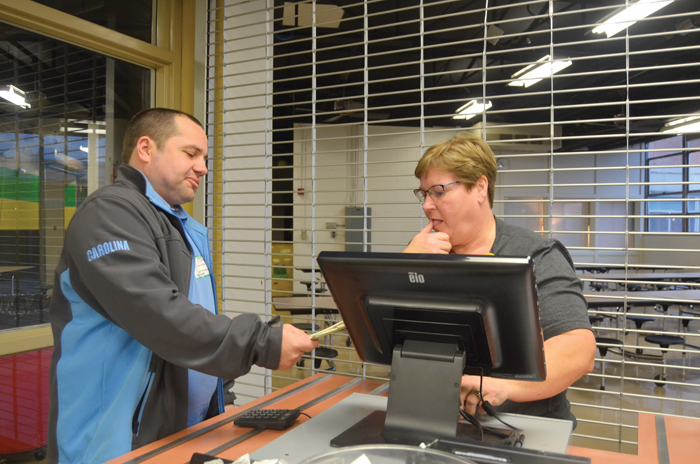 Brian Gilbert heard about the lunch debt that students could incur and decided he could help pay down that debt at his alma mater, North Rowan High. He hopes to continue to give toward the student lunch debt. He is seen here paying Nutrition Supervisor Doreen D'Amato. Shavonne Walker/Salisbury Post

North Rowan High is just one example of a growing problem, not only in Rowan County schools but across the nation.

Gilbert made an inquiry to Doreen D’Amato, North Rowan High School’s nutrition supervisor, and was told the debt had reached about $767. On Friday, Gilbert paid $400 and plans to return.

“When we see community partners like this it makes us very grateful,” said Rowan-Salisbury School System Nutrition Director Lisa Altmann.

Under guidelines set forth by the U.S. Department of Agriculture, students who fall below or at the federal poverty line qualify for free lunch and those who meet the requirement for a certain percentage of the poverty line are eligible for reduced lunch.

In some cases, families are still having financial difficulties even though their income is above the poverty line and some don’t even apply for reduced or free lunch. Students who do not have money in their account to cover the cost of the meal have amassed debt. In fact, students in the system have $9,500 in debt thus far, which is equal to the amount of debt that was generated in the previous school year. Altmann said that the amount was low compared to other districts.

“No student goes hungry. If they are hungry, they can’t learn,” Altmann said.

The school system’s Nutrition Services Department reaches out to parents whose financial circumstances have changed and believe have children eligible for free or reduced lunch but have yet to fill out an application. The school system was able to provide 10 emergency meals this year.

“As a human being, I want every student to get free meals,” Altmann said.

There are seven elementary schools, two middle schools and one high school within the system that offer breakfast and lunch to all students without the need for an application through the USDA’s Community Eligibility Provision program, according to the school system’s website.

“Across the nation in public schools we are seeing a big trend in school meal charges,” Altmann said.

Gilbert said he wasn’t initially aware of the issue of student lunch debt, but it was brought to his attention through a Facebook post from a North Rowan coach.

“It just hit me that everybody needs help once in a while. I graduated from North and my mom always taught me that if you could pay something forward, pay it forward,” Gilbert said.

He said anyone could face hardships. Some, he said, are just an illness or job loss away from not being able to provide a meal for their children.

When D’Amato received Gilbert’s request she told him, “Thank you. It’s a blessing.”

D’Amato said one other person had also assisted last week with paying down the lunch debt. Altmann said, unfortunately, there is a likelihood that there will be more debt going forward.

Altmann said other schools have been helped this year with debt by a person or group, including South Rowan High. She said Principal Kelly Withers’ church youth group conducted a service project, with proceeds raised earmarked for lunch debt at the school.

Altmann said the school tries to work with parents, but often parents can’t pay the debt. Some never respond to the school’s request for payment. The school system also seeks grants that would help pay debt since federal funds cannot be used to pay off meal debt.

The following area schools have also received donations this year toward lunch debt:

Another opportunity where students can receive a meal is through the free breakfast program, which is available at no charge to all students, regardless of their household income. It is usually offered at schools that have a high percentage of students that qualify for free or reduced-price meals.

Also, any student can come after school to receive a meal, Altmann said.

Gilbert said he has plans to work with the school to set up an account where he or anyone can add money at North Rowan High to assist with lunch debt.