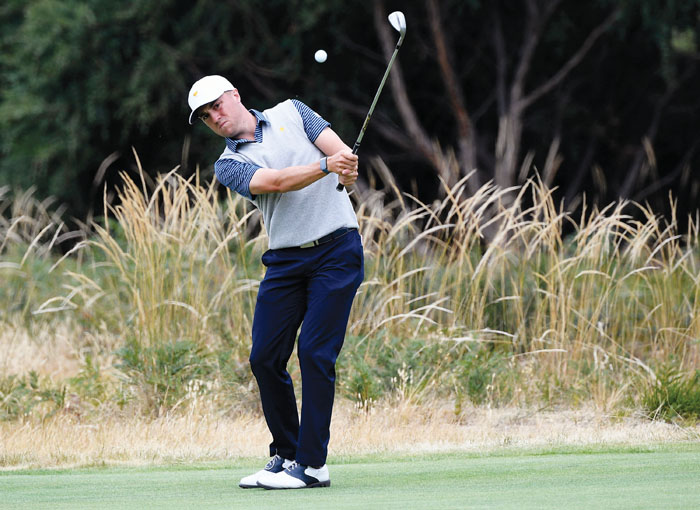 By DOUG FERGUSON AP Golf Writer
MELBOURNE, Australia (AP) — The Americans are in a big hole at the Presidents Cup, and there’s nothing Tiger Woods is doing about it.
Whatever momentum they had going into the double session Saturday at Royal Melbourne vanished as Abraham Ancer and the International team filled the scoreboards with their black-and-gold colors and built a 9-5 lead after three sessions.
Tony Finau birdied the last two holes to at least get a half-point from the final fourballs match for the U.S. team.
Woods, the first playing captain in 25 years and a winner in the two matches he played with Justin Thomas, took himself out of the lineup on Saturday morning for fourballs. And then in a surprise, he sat himself in the afternoon.
“You have to do what’s best for the team,” Woods said. “And I’m getting ready for the singles tomorrow.”
The decision even surprised International captain Ernie Els, sitting on the other side of the table from him and fully preparing to set his foursomes lineup based on where Woods was going to play.
“Yes, especially the way he’s been playing with J.T.,” Els said. “I thought Tiger would play this afternoon.”
Thomas instead headed back out with Rickie Fowler, the lone bright spot for the Americans in the morning when they took down Marc Leishman and Haotong Li with relative ease.
Along with sitting himself out, Woods also was questioned why he sent out Patrick Reed and Webb Simpson for a third straight time Saturday morning, even though they lost two matches already. They combined to make one birdie in fourballs — by Simpson on the short 11th hole — and trailed from the start as Hideki Matsuyama and C.T. Pan won in the biggest rout of the week, 5 and 3.
Ancer is 3-0 with three partners, a remarkable performance for a Presidents Cup rookie. He teamed with Sungjae Im to beat Patrick Cantlay and Xander Schauffele by combining to go 7 under through 16 holes. Ancer rolled in a 50-foot birdie putt on the third hole, and Schauffele had to make a 10-footer to match him.
The first seven holes were halved until the International team took the lead when both Americans made bogey on No. 8 and never caught up the rest of the way.
Adam Scott also came up big with a 30-foot birdie putt on No. 8 with Finau 8 feet away. Finau then missed as he and Kuchar lost the lead and never led again. Even so, the halve helped. Finau made a 7-foot birdie on the 18th to win the hole and keep the Americans within four points going into the afternoon foursomes.
It was the first time since 1998 at Royal Melbourne — the only International victory in the Presidents Cup — that the Americans trailed after three sessions.
Woods had company on the sidelines Saturday. He also said Bryson DeChambeau in both matches, while also giving Reed and Simpson the afternoon off after three losses.