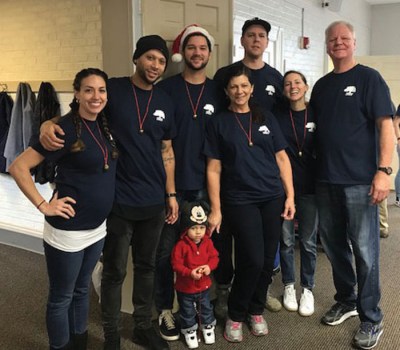 Submitted photo The Thomas family works at every Christmas dinner. In this photo are, in front, young Holt and Donna and across the back are Bethany, Austin, Taylor, Dallas, Alisha and Steve Thomas. 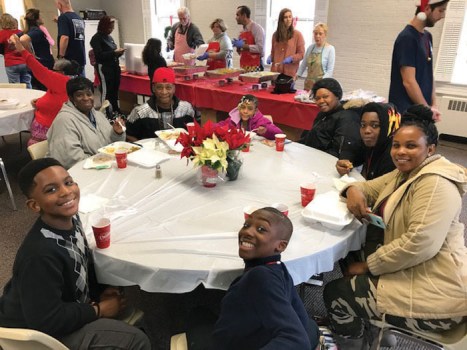 Submitted photo. Here are some of the happy people at one of the past THREE WIDE Foundation Christmas dinners. This year's dinner will be Dec. 19. 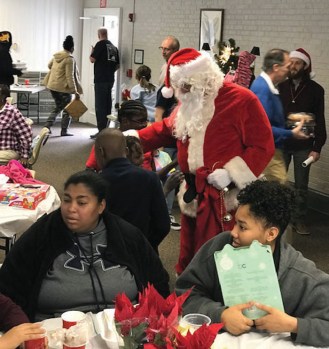 Submitted photo Santa Claus makes an appearance at a past Christmas dinner provided to children and their families by the THREE WIDE Foundation. This year's dinner will be held Dec. 19 at First Presbyterian Church. 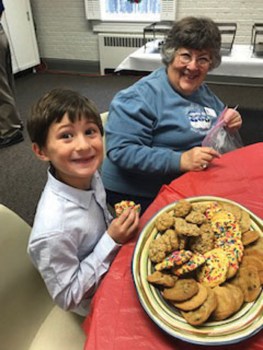 Submitted photo During a break at a past THREE WIDE Foundation Christmas dinner, volunteer Lynn Miller takes a break with her grandson, who appreciates the cookies. 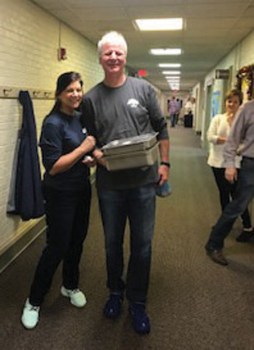 SALISBURY — With their three sons grown and out of the house, Steve and Donna Thomas have two back bedrooms they fill throughout the year with something else —  winter coats.

The Thomases’ THREE WIDE Foundation, which they founded in 2016, will have its fourth annual Christmas dinner from 4-6 p.m. next Thursday at First Presbyterian Church.

And each of the invited children, who are identified through Communities in Schools programs at five schools, also will leave the dinner with a new, brand-name coat — those winter coats that have been hanging out in the Thomases’ bedrooms.

Close to 300 invitees — the children and family members who come with them — are expected to attend the drop-in affair.

It’s all about the warmth of food, coats and generous people.

Served by the Thomas family, volunteer friends and members from three different churches, the guests will dine on a full Christmas feast of turkey, stuffing, potatoes, green beans, desserts and refreshments.

Before they leave, each child also will step into a downstairs store where he or she will “shop” racks of small, medium and large coats looking for the one to take home.

The couple’s foundation started not long after they had heard a Communities in Schools program on poverty and the local statistics connected with it, especially as it affected children in shelters and foster care.

“The number of children mentioned just devastated Steve and me,” says Donna, a retired educator. “Our focus has always been children. He said, ‘Let’s do something to help. … This was his vision. I’m just supporting him.”

They came up with the idea of a Christmas event for children in need, but “we kept running into red tape,” Donna says.

They decided the best route was to hire an attorney to help them set up a non-profit 501(c)(3) entity, and the Thomases named it the THREE WIDE Foundation — “a response to Jesus’ call to his followers to help those in need,” their website says.

The number “3” has special meaning to the couple, they say, because it represents the Holy Trinity and their three sons.

The foundation offered its first Christmas dinner in 2016 for selected children from Overton. Many people and groups have been brought into the fold over time, as the foundation also added more schools and events.

“A lot of people have embraced it,” Donna says. “We couldn’t do it without help.”

Food Lion has become a major sponsor, providing turkeys and other foodstuffs for the Christmas dinners , not to mention hams for a first-ever event this past spring.

THREE WIDE Foundation distributed 70 hams to families over spring break, which the Thomases thought was important. No other organizations were donating food to selected families over that extended time away from school.

Many of the students targeted for the THREE WIDE events are “backpack” kids who are supplied backpacks of food to take home with them over the weekends.

Other organizations or businesses that have become involved include the Foundation For The Carolinas, which has awarded grant money; the Salisbury Kiwanis Club, whose members did all the grilling at a back-to-school event this past August; and Chick-fil-A, a new ‘birthday” partner.

Chick-fil-A partners with THREE WIDE to provide free chicken sandwiches to selected students on their birthdays.

THREE WIDE Foundation gives to the CIS student support specialists a birthday card and the Chick-fil-A gift card, and these coordinators in turn present those items to the students on their birthdays.

This program started in August, with at least 40 students benefiting so far.

The Salisbury Chick-Fil-A also will be adding information on the THREE WIDE Foundation to its website and providing a meal card to individuals who donate a new coat to the foundation.

The Thomases accept new winter coats throughout the year, but Donna also likes to buy a considerable number of them during the after-Christmas sales or the sales around Thanksgiving.

If kids who were invited to the drop-in dinner next Thursday don’t show, coats are still set aside for them. Overall, Donna says, extra coats go to schools and extra food from the Christmas dinner goes to the Rowan Helping Ministries shelter.

Donna and Steve, who is manager at Morrisette Paper Co. near Greensboro, want to keep growing their foundation’s Christmas dinner-and-coat affair every year.

“One of Steve’s dreams is to fill the Civic Center,” Donna says.

Everything that’s happened with the foundation has made a big impression with the couple.

“People really do want to do something for others,” Donna says.

Anyone looking to donate time, money, food, services or supplies can contact the Thomases by email at threewidefoundation@gmail.com.