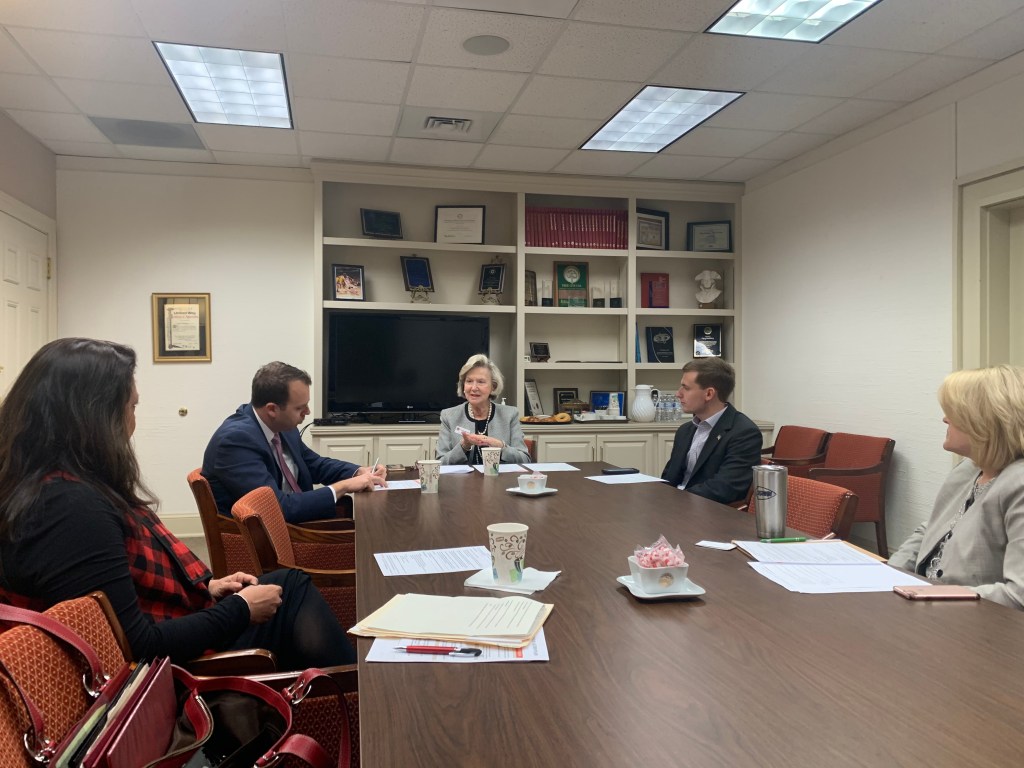 SALISBURY —  The word “partnerships” was underlined and starred on the notes of Rep. Ted Budd’s District Director Kyle Bridge as he met with Salisbury Karen Alexander on Thursday.

The meeting first started out as a “thank you” to the congressmen for helping secure a transit grant and to talk about the city’s wish list of projects and those needs — its Federal Action Plan for 2020.

“You have given our city a gift, and now I’m asking for more,” Alexander said.

The city was awarded an U.S. Department of Transportation grant for $480,000 last month for the city to purchase four low-floor light-duty buses to replace four heavy-duty buses. Tillis, Sen. Richard Burr, Budd and Rep. Richard Hudson helped secure the grant. The city will provide a local match of $120,000.

Alexander said the grant came at a perfect time because the city had just completed its transportation master plan. The grant will help not just the Salisbury community.

She said the transit system expanded to East Spencer and Spencer to connect a Greyhound bus station with the the VA. From that, the city added more stops as people from those communities needed transportation to Salisbury, the county seat, to go to work, shop or go to the doctor.

Alexander asked Bridges and Estes to look into funding that could be available for those two municipalities, too.

“I’m asking as the mayor of Salisbury to help our neighbors as well,” Alexander said.

Leslie Mozingo, the city’s federal lobbyist, said Salisbury could also utilize grants that help veterans because of the Salisbury VA. She said she would look into transit grant money that supported veterans.

Alexander spoke about other grant money the city would like the congressmen’s help to secure.

One item would involve transforming the old Kesler Mill site into usable land. Alexander said the neighborhood was build around the mill. It is also near I-85 and a commercial node.

The mill has been demolished, and it is a brownfield. Alexander said the city found asbestos in the debris.

Alexander also reminded Estes and Bridges the site is in an opportunity zone, too.

Alexander also said the city had applied for an Environmental Protection Agency technical assistant grant for Local Foods, Local Places, which would give a permanent location of the city’s farmer market in downtown.

Mozingo said a letter of support from congressmen “would be great” but asked if the federal representatives could call to push the grant along, too. They believe the city could receive a grant award in February.

Mozingo walked through other portions of the city’s federal action plan.

Under public safety, the projects are re-entry and second-chance programs for current and former offenders; innovative policing strategies, gang suppression and violent crime reduction in West End for police; working with the Fire Department to secure funding; and securing grants to help with the community partners battling the opioid epidemic, such as a county treatment center.

“Even though this is Salisbury’s Federal Action Plan, I can assure you in every meeting they continuously talk about how they could help others adjacently, Spencer and East Spencer, but also in surrounding communities,” Mozingo said.