Olive Garden wreck vehicle turned on its side 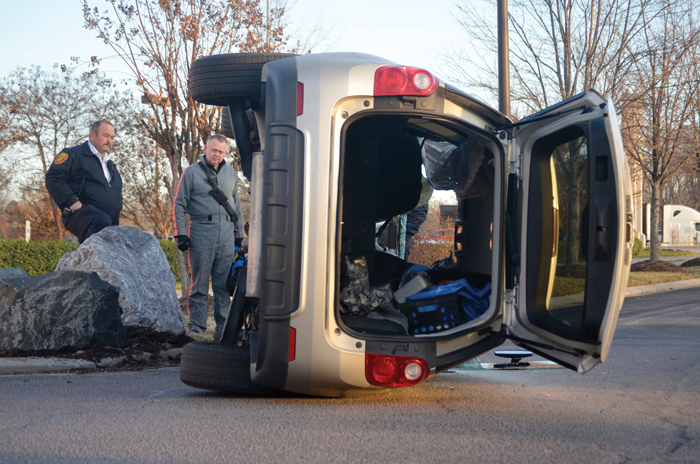 Salisbury Fire officials said the driver took a turn too sharp and her vehicle turned over onto its side and she was unable to get out on her own. Bystanders held up the roof area of the vehicle to keep it from tipping until firefighters were able to stablize the Chevrolet. Shavonne Walker/Salisbury Post

Salisbury Police Officer Matt Benjamin said Linda Arnold, 67, of Salisbury, received minor injuries following a single-vehicle crash on Thursday evening as she was making a turn toward Olive Garden restaurant on Klumac Road in the Wallace Commons shopping center. She turned too sharp and struck the curb and large boulders in the median that sent her Chevrolet Equinox onto its side. About six to eight bystanders held up the sport-utility vehicle until Salisbury firefighters could stabilize it, said Battalion Chief Nick Martin. Lexington resident Traci Moree had been shopping and was waiting to turn when she witnessed the vehicle crash. Moree said she nervously called 911, fearing that the driver was seriously injured. When the vehicle started to rock, bystanders came out of nowhere and held the vehicle in position, Moree said. The air bags did deploy and Arnold was wearing her seatbelt. Firefighters had to remove the front windshield to gain access to the vehicle. They were able to remove Arnold from the back hatch, Martin said.