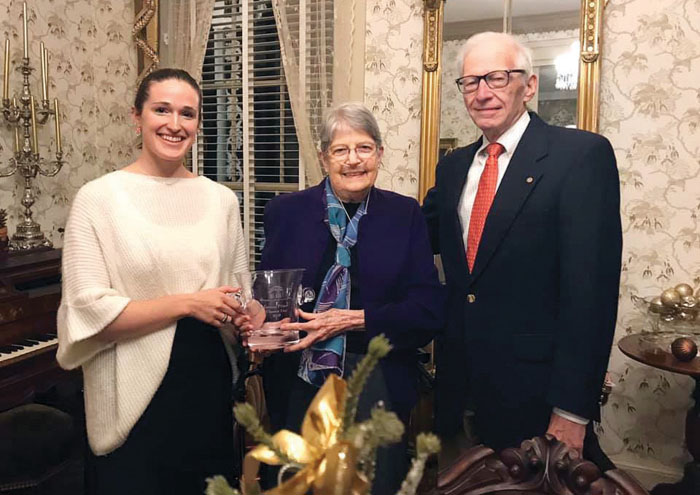 Submitted photo Gavine Pitner, center, holds the Clement Cup, which the longtime volunteer and Hall House docent received from Historic Salisbury Foundation. At right is Ed Clement, for whom the award is named. At left is Sada Stewart, executive director of HSF.

The Clement Cup recognizes people with “the highest level of dedication and commitment to historic preservation,” according to the foundation.

Sada Stewart, executive director of HSF, added, “It is given to recognize superior commitment over a sustained period of time, above and beyond the norm, to the historic preservation effort in Salisbury and Rowan County.”

Stewart said Pitner has belonged to the foundation for more than a decade “and has supported every effort the foundation has undertaken in recent history.” She described Pitner as a dedicated Hall House docent and “a volunteer who shows up whenever the need arises.”

“Gavine, we are eternally grateful for the support you have offered the foundation since you got involved,” Stewart told Pitner at the presentation.

“You have contributed in so many ways to the expansion and continuation of the work that Historic Salisbury Foundation undertakes annually. And, I think it is important to note that in many instances, such as the foundation’s archeological undertaking at our Confederate Prison lot, Gavine does not respond to a call for help, but rather initiates contact by offering assistance.

“OctoberTour, Hall House tours and general upkeep of our properties have only been possible because of our supporters — and you lead the charge.”

Stewart credited Pitner and her family with doing “amazing work in ensuring the historic character of Fulton Heights, Salisbury and Rowan County.

“And for that, Historic Salisbury Foundation is grateful,” Stewart said.