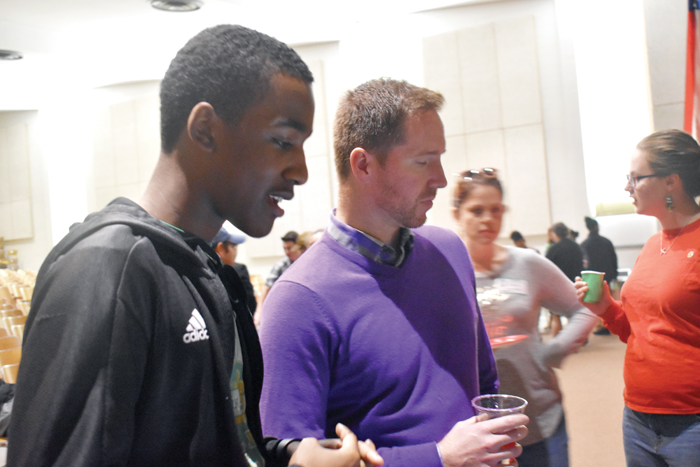 Each student “traveled back in time” by dressing as several well-known figures in American history. Each student presented their party to an adult they invited and explained accomplishments of the person they were dressed as, the social impact that person had and the significance of choosing that person.

“I first encouraged them get the five people that best connect with them and from those five people to develop a theme,” said Joshua Yoder, American history teacher at North Rowan. “I gave them a week to prepare. It was really up to them to develop and make those connections. It really is a student-led form of learning.”

Yoder said that he felt each of the projects “really embodied whom students are” and “helped champion their capabilities.”

Students chose figures such as Elon Musk and Harriett Tubman as well as musical acts and professional athletes.

“I’ve been playing since I was about 6 years old. I currently play as a shooting guard for our varsity team,” said Watkins, who envisions going to N.C. State University or N.C. A&T University after high school to study audio engineering.

Yoder said that students were asked to create their own theme for their presentation and to create a beverage and snack that could be applied to the theme as well as two party favors. Students needed four people from before the year 2000 and only one from afterward.

Yoder said that students were also required to provide historically defensible reasons for choosing the individuals each of them chose.

The idea for the activity came from a summer course he took at Wake Forest University.

“I have molded the assignment towards a more authentic piece and I have found that the students have enjoyed working through the intricacies of it,” he said.

“Music has been a big part of my life and has helped me through a lot,” Church said.

Spencer board sworn in, dives into town issues