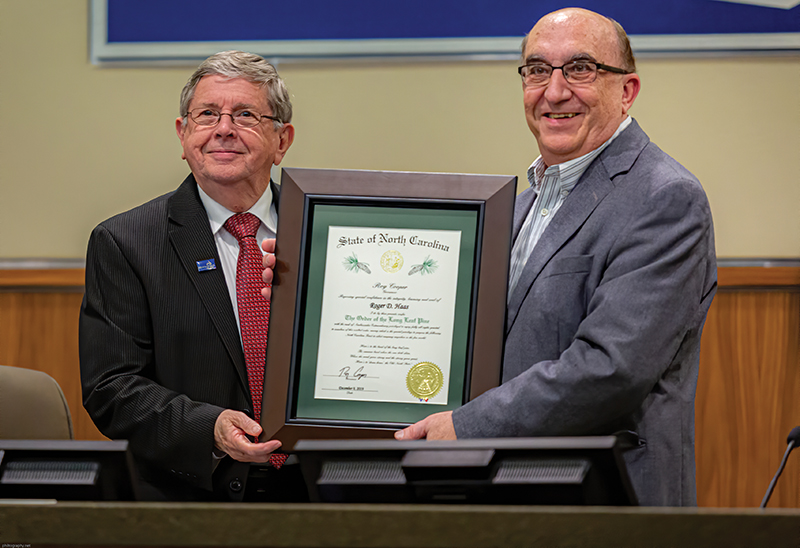 KANNAPOLIS — Outgoing Mayor Pro Tem Roger Haas, who chose not to run for re-election this year, received the Order of the Long Leaf Pine at Monday’s City Council meeting.

The Order of the Long Leaf Pine is one of the highest civilian honors the state can bestow and the highest award for state service granted by the governor.

Haas received the award for his 16 total years on the Kannapolis City Council and more than 30 years as a community leader.

Upon receiving the award Haas said, “I have always wanted to be remembered for laying the foundation for the lasting success of the city. The voters of Kannapolis have given me the opportunity to do that and I have enjoyed serving.”

Haas is a graduate of Gardner-Webb University who majored in business with additional management studies at Cornell University. He served as Southeast regional vice president of U.S. Tobacco, where he founded one of the marketing arms of the company that promoted the racing industry.

His community and civic service began in the 1970s. He was on the Executive Committee for the Cabarrus County Republican Party and an active member of the Kannapolis Rotary Club, serving as program chair, social committee and being named a Paul Harris Fellow.

He also has been an American Red Cross volunteer and board member, served as a board member of the Kannapolis Chamber of Commerce and worked as a volunteer in the school system, teaching fundamentals of business to seventh graders.

A news release from the city credited Haas with being one of the first people to advocate for the current location of the Kannapolis Intimidators Minor League stadium and secured a $40,000 grant from his company, U.S. Tobacco, for its construction. He was also a 600 Festival Committee Member, on the United Way Advisory Council and appointed to serve when the Cabarrus County Tourism Authority was organized.

The city said in 1996 Haas was the driving force and fundraiser for the building of the Kannapolis Train Station, the only Amtrak location in Cabarrus County.

After retiring from U.S. Tobacco, he became the president/founder of AIM Tours, a Kannapolis based travel and tour company.

He is a member of First Baptist Church in Kannapolis where he has served as a Sunday school teacher for more than 23 years.

He is married to his wife, Kathy, and has three children. Haas says his crowning achievement is Brynn, Alexis and Ayden, his three granddaughters.

Livingstone board member, alumnus to deliver keynote address at…