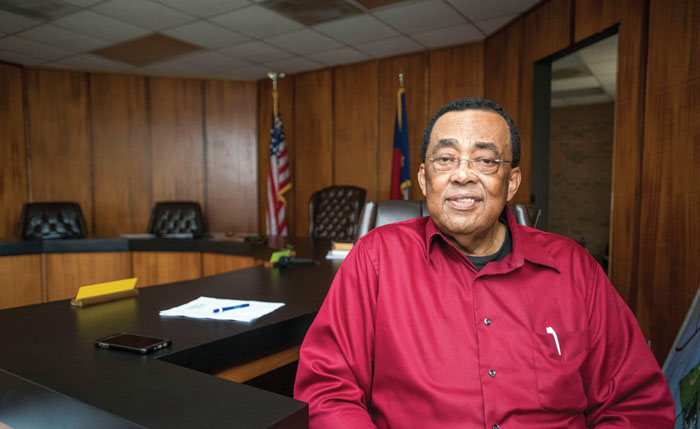 JON C. LAKEY/SALISBURY POST John Noble, at the dais in East Spencer Town Hall, says, ‘I like helping people and that’s what it was about with me. I knew about 80 to 90 percent of the people’ in the town that he has served for nearly four decades.

EAST SPENCER — In 1981, a 30-something John Noble didn’t exactly know what he was getting into, but at the request of a friend Benjamin Craige, he ran for the East Spencer town board.

Noble won, to his surprise, and has continued in that role on the town board except for a two-year break, for 36 years, making him one of the longest-serving town councilmen in Rowan County.

Noble admitted that, although he’d never held an elected position and didn’t know what was involved, he ran. And he ran again and again over the years, with the exception of his two-year break. He’s served as mayor pro tem three times and was re-elected last month.

Once this term is up, Noble will have served for 40 years.

Noble said he checked with the Rowan County Board of Elections and learned of another councilman in a town elsewhere who’d served just as many years. But he has yet to find anyone locally who has served the same amount of time he’s put into local politics.

“I really enjoy it and I like helping people and that’s what it was about with me. I knew about 80 to 90 percent of the people,” said the East Spencer native.

Noble has been a lifelong member of Shady Grove Baptist Church. He’s attended the church since was 8 and was baptized there. Noble attended what was formerly Dunbar High School. He worked with the Rowan County Sheriff’s Office for 46 years before retiring as a lieutenant with the court division. He received a bachelor’s degree in criminal justice from Shaw University.

Noble worked in law enforcement at a time when integration was in its infancy and there was a push among the NAACP to see black officers in the schools. He was among the first black deputies hired by the Rowan County Sheriff’s Office. Noble and the late Albert Stout, who would go on to work for the FBI, were hired around the same time. Noble applied and was hired six months later.

“Albert Stout had an application in and Charlie Herring was the deputy chief. He said, ‘You still want to be a sheriff deputy.’ I said, ‘Yes, sir,” Noble recalled.

Noble said the second question he asked was about the pay. He was a firefighter at the time, and being a sheriff’s deputy would be a higher paying job. So, he traded in his turnout gear for a gun and a badge.

Noble said one of the reasons he has continued to serve on the East Spencer town board is because he feels he owes it to his hometown and the people in it who raised him.

“I owe them, and I’m going to give something back to them,” he said.

Growing up in East Spencer, Noble said, everybody was your mom and dad.

“If you said something, they would jerk you up,” he said, laughing. “I enjoyed growing up here.”

Noble serves as an unofficial public safety liaison to the East Spencer board, having worked in fire service and law enforcement. Noble says he makes it a priority to see what the police and fire departments’ needs are and does what he can to advocate for and meet their needs. He was a big proponent of the police and fire department getting new vehicles in previous budget years.

Noble said his experience level is one big difference between being an incoming board member in 1981 as compared to now.

“What people need to understand is you think you can do this and that, but you are governed by the state of North Carolina. You can’t promise people stuff you can’t do,” Noble said. “We had more money to do stuff with back then. Since the state has cut off the funds, we don’t have the revenue.”

He was once in a position that required learning from senior board members. Now, Noble says, he tries to be a mentor for newer members.

Ironically, the biggest issue the board faced in the 1980s, Noble said, is the same issue they are currently facing — high water rates. He said the water rates weren’t as high as they are now, but the town experienced issues then.

Trying to get board members to work together is a timeless issue, too. Serving on a town board, he said, isn’t about one particular person’s ego, but about what they can do for their community.

“You’re not here for yourself. You’re here to serve,” he said. “We’re going to have issues and we might not agree. But you talk about it, vote on it and move on. If you lose, you lose then move on to the next issue.”

Although the town has seen its fair share of police chiefs, fire chiefs and town administrators, Noble said current Police Chief Sharon Hovis has done a fine job. He noted the town’s low crime rate and the low turnover rate within the police department since she took the helm.

Noble says his greatest accomplishment has been seeing the fire department get a new firetruck earlier this year.

Noble said he hopes that more young people would become involved in politics and local government. In his conversations with some youth, Noble said, they don’t understand why they should get involved.

Noble’s personal goal this term is to make sure the citizens aren’t afraid to come and voice their opinions about what they need.

“We are there for them not for us. We want to see that their wants are met,” he said.

Noble said he hopes his legacy will be that he left the town better than it was.

“We’re on the right track. I want to see us keep moving forward,” he said.

He’s a member of Kappa Alpa Psi Fraternity, Inc., the N.C. Law Enforcement Officers Board of Directors as well as a member of Harold B. Jarrett Post 342 and the Western Star Lodge No. 9.