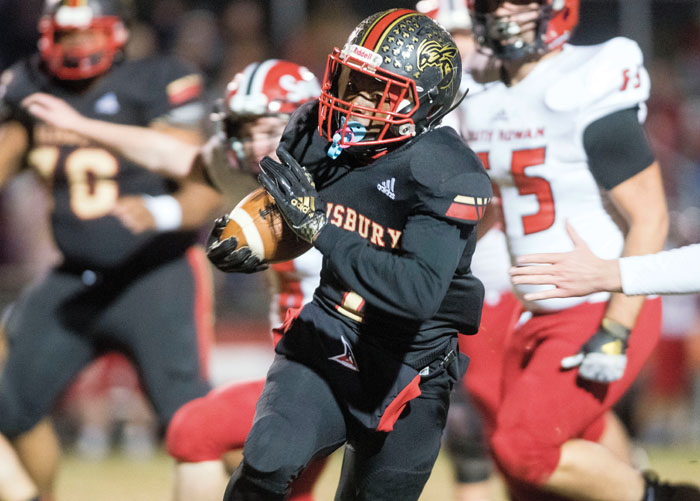 JON C. LAKEY FILE PHOTO/ SALISBURY POST ... Salisbury running back Mike McLean (7), shown during a game against South Rowan, on Nov. 8. McLean rushed for 184 yards and two touchdowns last Friday in the state 2AA East final at Randleman. On Saturday, McLean and the Hornets take on Shelby in the state championship game.

SALISBURY —  It was one of those seasons when running backs dominated the county’s offensive statistics.

In the four-horse race for county offensive player of the year honors, the fourth horse all along was the steady back at Salisbury — junior Mike McLean. McLean didn’t get as many yards or carries as the other three contenders. He didn’t romp for those 200-yard games like Pinckney. He didn’t pile up the touchdowns like Wilson. He didn’t have those crazy explosions for 70-yard scores like Houston.

McLean played in an offense that threw the ball enough to produce the county passing leader (Vance Honeycutt) and he had a talented freshman (JyMikaah Wells) rotating with him in the backfield, so he didn’t post mind-boggling stats. But like Pinckney, Houston and Wilson, McLean (5-9, 175) always was good for 7 yards per carry, quick enough to hit the holes, rugged enough to always be driving forward at the end of the run.

Disguised in Salisbury’s thrilling playoff run was the fact that the offense struggled mightily in the second-round win at Washington and the fantastic third-round win at Hertford County, the most talented team Salisbury has played to this point.

Salisbury’s offensive linemen get pizza for 300-yard rushing games, but the Hornets rushed for just 116 yards at Washington and 159 against Hertford County.

With a trip to top-seeded Randleman looming last Friday in the 2AA East regional final, Salisbury looked for more consistency from its offense.

Randleman’s 3-3 stack defense threatened to provide problems for the Hornets.

“We saw that defense just once this season and that’s when Central Davidson surprised us with it, and we weren’t prepared for it — at all,” Salisbury coach Brian Hinson said. “We really struggled against Central offensively, but we knew what was coming from Randleman. We knew Randleman coach (Shane) Handy does a great job with the 3-3 stack. We prepared for it. Coach (Taylor) Fender did a great job coaching up our offensive linemen on getting their blocks, and we counted on a big game from Mike McLean. Our defense — they’ve been lights-out all season — but we were going to need everything clicking to beat Randleman.”

Salisbury had to be weary from back-to-back road trips.

“I can’t speak for everyone, but I know I was feeling a little tired,” McLean said. “We’d gone to Washington and we’d gone to Hertford, and both of those games were more than 400 miles on the round trip. Randleman, that was just 50 miles away, so that was basically a home game. We knew more of our fans could come to Randleman. We knew it would be crazy. That lifted our spirits.”

Practice got better for the Hornets every day.

“We were focused, and every win starts with a good week of practice,” McLean said. “I could see the confidence building up in our offensive line. We were doing different things for Randleman to take out that extra backer they have, pulling a tackle and a guard. But I didn’t do anything different. My plan was the same as always — run hard.”

As a varsity freshman, McLean demonstrated potential, rushing 72 times for 436 yards. As a sophomore, he was shifted to quarterback, out of necessity, and while he was playing out of position, he still threw reasonably well while running for 832 yards on 159 carries. He threw for six touchdowns and ran for 14. He concluded his sophomore season with three straight 100-yard efforts.

Honeycutt emerged as a dangerous quarterback this season as a junior (with more than 2,000 yards combining rushing and passing), but McLean remains the backbone of Salisbury’s offense. He had four 100-yard games in the first half of this season, but he hadn’t produced one since the huge victory at Ledford, the biggest moment of the regular season, on Oct. 18.

That would change at Randleman.

While Salisbury’s margin of victory at Randleman was just 14-7, the Hornets’ dominance, despite two turnovers and just 4-for-12 on third-down conversions, was total. Randleman got its points on a pick-six.

“It was a situation of Mike running hard and our o-line getting comfortable,” Hinson said. “Mike answered the bell and did what he can do. He made the cuts. He found the holes. He hasn’t had a huge number of carries this season. This was our 15th game, but his legs are still fresh.”

As Salisbury defensive coordinator Mike Herndon pointed out, Randleman only had nine possessions for the game. Hertford County had eight in the first half alone. It was an ideal situation for Salisbury’s defense. The Hornets stifled Randleman’s offense.

“Every time our defense would come off the field, (linebacker) Jabril Norman would say, ‘We need ya, Mike, we need ya.’ And I would tell him, ‘I gotcha.'” McLean said. “Our o-line, I can’t say enough about those guys. I’d get the ball and the front side would be  wide open. It didn’t seem like my numbers would be all that big at the end of the night, but the yards came pretty steady.”

It was a monster outing for McLean, considering the quality of the competition, and lifted him to 1,500 rushing yards for the season. He scored both Salisbury TDs to raise his season total to 16 rushing TDs and his career total to 37.

His yards and carries for the season (212 in 15 games) are still fewer than the extraordinary workhorse numbers posted by Wilson (225 in 13 games), Houston (240 in 11 games as a running back) and Pinckney (262 in 11 games), but McLean holds some bragging rights. After all, he’s still playing.

“I feel very good right now because we know we helped our defense out a lot on Friday,” McLean said. “A lot of games they’ve carried us, so it was good that we could give them a break.”

Shelby (13-1), the top seed from the 1AA West bracket, a frequent state champion and a heavy favorite, is next for McLean and the Hornets on Saturday at 11 a.m. in Winston-Salem.

“Shelby is very good, we know how good they are, but we also know that we’re good,” McLean said. “We just have to be better than they are for 48 minutes.”