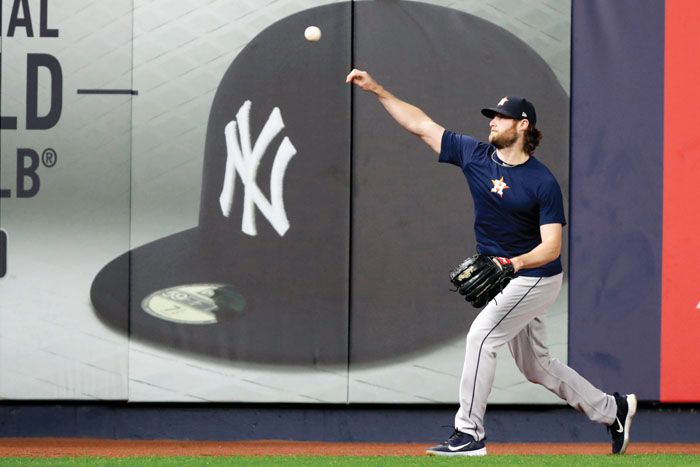 FILE - In this Monday, Oct. 14, 2019, file photo, Houston Astros Game 3 starting pitcher Gerrit Cole throws on the field at Yankee Stadium in New York, after the team arrived to prepare for the American League Championship Series, against the New York Yankees. Cole and the New York Yankees have agreed to a record $324 million, nine-year deal, a person familiar with the contract told The Associated Press, late Tuesday, Dec. 10, 2019. (AP Photo/Kathy Willens, File)

San Diego (AP) — Meeting with Gerrit Cole and the pitcher’s wife for the first time last week at the Fashion Island Hotel in Newport Beach, Brian Cashman tossed out a literary reference that prompted laughter.

“You’re my white whale,” the New York Yankees general manager told him. “He was someone we drafted in the first round and he chose to go to college. And we tried to trade for him, and Pittsburgh chose to trade him to Houston instead. So we’re hoping three’s a charm.”

It was. With the help of a record $324 million, nine-year contract.

Cashman harpooned the biggest prize in the free-agent market, agreeing to a deal with the 29-year-old right-hander on Tuesday night, a person familiar with the deal told The Associated Press. The person spoke on condition of anonymity because the agreement, subject to a successful physical, had not been announced.

After two dominant seasons with Houston, Cole will join a rotation that projects to include Luis Severino, Masahiro Tanaka, James Paxton and J.A. Happ or Domingo Germán, and a roster built around young stars Aaron Judge, Gleyber Torres and Gary Sánchez.

“You’re talking about a guy that is the best of the best,” Yankees manager Aaron Boone said Wednesday. “You’re just hopefully finishing off a team that can potentially win a championship.”

After several seasons of payroll restraint — at least by pinstriped standards — the Yankees increased their projected luxury tax payroll to $247 million. That is $39 million above the initial threshold and about $1 million below the start of the highest surtax and a penalty that would back the Yankees’ top 2021 amateur draft pick by 10 slots. New York is on track to owe at least $14 million in tax for 2020 and even more if outfielder Brett Gardner is re-signed and additions are made to the bullpen.

Other than taking on high-priced outfielder Giancarlo Stanton, the Yankees in recent years had promoted prospects and acquired cost-effective options that included Luke Voit and Gio Urshela

“I think we’re just using every tool in the toolbox, not just the big hammer, but it doesn’t mean the big hammer is not still available,” Cashman said,

While there have been no major trades at the winter meetings, there were several more free agent agreements reached, according to people familiar with the deals who spoke to the AP on condition of anonymity:

–reliever Blake Treinen and the Los Angeles Dodgers at $10 million for one year.

–right-hander Tanner Roark and Toronto at $24 million for two years.

–right-hander Michael Wacha and the New York Mets for one year.

Commissioner Rob Manfred said Major League Baseball is pushing ahead with a rules change for 2020 that requires pitchers to face at least three batters or finish a half-inning. Active rosters will increase by one to 26 from opening day through Aug. 31 and will drop from 40 to 28 from Sept. 1 through the end of the regular season.

The injured list for pitchers will revert to 15 days from 10 days. In tandem, pitchers optioned to the minors will have to spend 15 days with farm teams before they can be recalled unless they replace a pitcher going on the IL.

Seven major league teams will expand protective netting to the foul poles and 15 others will expand their netting generally to the area in the outfield where the stands begin to angle away from the field,

A four-person committee of scientists concluded baseballs this year had less drag on average than in previous seasons, contributing to a power surge that resulted in 6,776 home runs, well above the previous mark of 6,105 set in 2017.

“We have never been asked to juice or de-juice a baseball,” Rawlings President Michael Zlaket said.

In adding Cole, the Yankees will forfeit their second-highest pick next June, about No. 64, their fifth-highest, about No. 175, and $1 million of 2020-21 international signing bonus allocation. Houston will receive an extra pick, somewhere around No. 75.

Voit seemed set to cede his uniform to Cole.

“Hey the number 45 jersey fits really weird and runs really big,” Voit tweeted. “Not a problem that you will want worry about for 9 years so I’ll take care of it.”

Cole grew up a Yankees fan. Newark’s The Star-Ledger ran a photo that caught the then 11-year-old in the stands before Game 6 of the 2001 World Series in Phoenix holding a pinstriped sign that read: “Yankee Fan Today Tomorrow Forever.”

“You’re seeing a guy that’s really talented, really good at his craft, really intelligent,” Boone said. “This is what greatness can look like when it all gets synced up.”

New York was thought to have outbid the Los Angeles Angels and Dodgers, the teams closest to Cole’s home. Yankees owner Hal Steinbrenner had several conversations with Cole’s agent, Scott Boras, and authorized the guarantee of a ninth year. Cole was drafted by the Yankees with the 28th overall pick in 2008, but he spurned then and enrolled at UCLA.

“We definitely weren’t mad at the Cole family or Gerrit Cole himself. More mad at ourselves,” Cashman said. “I don’t think many high school kids being drafted in the first round by their childhood dream team with financial components coming their way that far exceed what a college scholarship would be worth would say, `I’m going to college because it’ll all work out and I’m going to bet on myself.’”

“Look, we want to beat the Yankees as badly as anybody, trust me,” he said. “I think it’s really just a question of us being able to step back and say, what is the best approach for us to do that? The more that we feel we’re being reactive to other teams’ moves, I think the more we’re playing their game.”