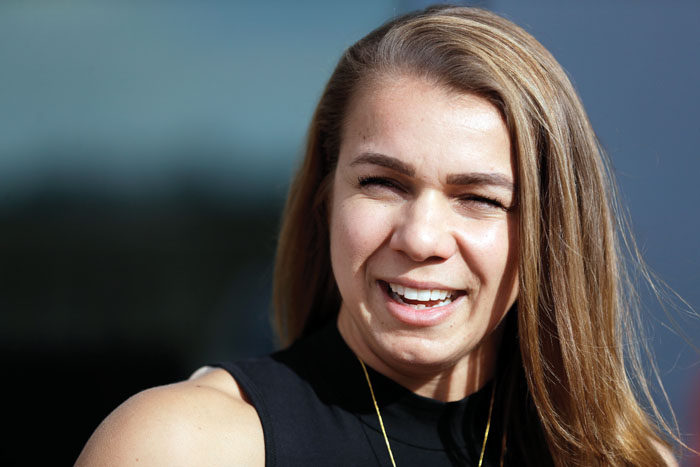 SAN DIEGO (AP) — Rachel Balkovec wants to be a hit with the New York Yankees — and the way to do that is to help their minor leaguers get more hits.

She was hired in November and starts work next month as a minor league hitting coach, believed to the first woman hitting coach employed by a big league team.

“She was really impressive. I really look forward to having more conversations with her,” Yankees manager Aaron Boone said Tuesday after talking with Balkovec at the winter meetings. “She has a really good understanding, especially when it comes to the pitch tracking.”

A 32-year-old from Omaha, Nebraska, Balkovec was a minor league strength and conditioning coordinator and coach for the St. Louis Cardinals from 2011-15, then switched to the Houston Astros as Latin American strength and conditioning coordinator. She worked with the Dutch national baseball and softball teams in the past year while studying for her second master’s degree.

Yes, women have not been given the same opportunities as men in Major League Baseball. She is past that.

“My mom always used to say, life’s not fair,” she explained. “So is it fair? No. Does it matter? No. You have to keep standing at that door banging on it.”

All those hurdles in a male-dominated sport have toughened her.

“I view my path as an advantage,” she said. “I had to do probably much more than maybe a male counterpart, but I like that because I’m so much more prepared for the challenges that I might encounter.”

Balkovec interviewed with Kevin Reese, a former major leaguer who is the Yankee’ senior director of player development; Andrew Wright, hired in June as manager of staff development after four years as baseball coach at the University of Charleston; and Dillon Lawson, who joined the Yankees before last season as a hitting coordinator after working in Houston’s minor league system.

“When I had Kevin Reese and Dillon rave to such a level about her as they did, that was all good enough for me,” general manager Brian Cashman said. “Since we hired her, a major league club interviewed her in San Francisco for an open major league coaching position. So thankfully, she’s still ours.”

Born July 5, 1987, Balkovec played softball, basketball and soccer at Skutt Catholic High School in Omaha. She enrolled at Creighton, where she was a catcher, then transferred to New Mexico and received a degree in 2009 with a major in exercise science. Two years later, she got a masters in sports management from LSU.

She moved to the Netherlands in 2018 to study at Vrije Universiteit Amsterdam for a masters in human movement sciences, focusing in biomechanics. She was exchanging videos of Dutch players with Lawson, and her former Astros colleague asked her to interview with New York.

“I think you look around at the landscape of the coaches that are being hired and it’s people that really understand how people move and how to get players to better understand their own bodies,” Reese said. “And then she started to get into some of this vision-tracking-type stuff, and that’s all really intriguing to us, too. So it’s a combination of a lot of different things. We’re always looking for problem solvers and people who are trying to figure things out on their own, and I think that’s basically what she’s done her whole career.”

Lawson had encouraged her to make the jump to coaching. As part of the research requirement for her latest degree, she had worked since August at Driveline Baseball in Kent, Washington.

“Probably the most interesting thing from a broad perspective for me, leaving strength conditioning, going to the field, is the mental side of it, where a guy’s in a slump for 30 ABs, what do you do?” Balkovec said.

She was excited to work with assistant general manager Jean Afterman, a beacon for women in baseball who is entering her 19th season with the Yankees, her ninth as senior vice president. Balkovec will help Gulf Coast League players at the minor league complex in Tampa, Florida, make trips to the Yankees’ complex in the Dominican Republic and do some roving throughout the minor league system.

She learned Spanish from prospects in the Cardinals and Astros systems.

Balkovec will be in uniform, just like the other coaches.

Looking ahead, she hopes to be moved up to even greater challenges.

“I have aspirations of being in a more leadership role from a broader standpoint,” she said. “So whether that’s director of baseball operations or farm director or GM, I also view this as a pretty vital step in my learning process. … So I’m going to dive into hitting and dive into being a hitting coach, and who knows where I’ll end up after that?”