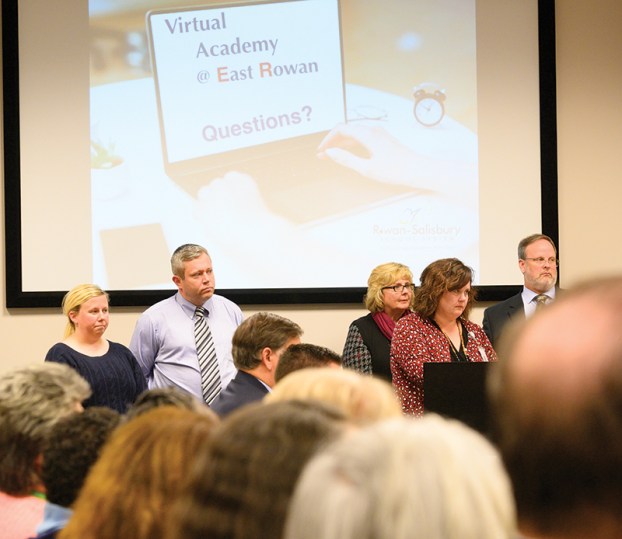 Josh Bergeron / Salisbury Post - Rowan-Salisbury Schools staff present a proposal for the Virtual Academy at East Rowan to the school board in November. The proposal would offer three options for taking classes, including an online-only diploma.

Laurel to the Rowan-Salisbury School Board and system staff for their roles in developing and approving the Virtual Academy at East Rowan High.

If executed well, the Virtual Academy can serve as a good example of ways Rowan-Salisbury Schools can use its renewal flexibility for the better. The Virtual Academy will offer an online-only diploma option as well as the chance for students to take a blend of in-person and online classes. East Rowan staff hope it will lure homeschoolers back to the public schools system, too.

There will be naysayers who focus only on the pitfalls of online-only education. They are right to ask tough questions about challenges the Virtual Academy will face. No matter how well-implemented the Virtual Academy is, there will be students who don’t have the discipline or work ethic for online classes. And we hope East Rowan teachers will redirect those students back to traditional classes.

But there will be many more students who will benefit from the freedom of online classes. Chamya Rawls, who is scheduled to graduate this month, is an example.

Rawls, who had a child at age 16, said she thought seriously about dropping out to take care of her child, work and pay bills. She still works, but has taken advantage of existing online offerings en route to her diploma.

“I didn’t want to be a stereotype, and I had to finish school for my daughter,” Rawls told the school board Monday.

Laurel to the use of advanced technology to solve a 1984 cold-case murder last week.

Salisbury police told the media they were able to exonerate Jodie Trexler Laird, the sister of murdered teenager Reesa Dawn Trexler, through DNA technology that analyzed hair and sperm, as well as conducting new interviews. Police last week would only say a black man had committed the crime. But documents obtained by the Post show police exhumed the remains of Curtis Edward Blair, who was buried at Memorial Park Cemetery in Salisbury, during their investigation.

We hope advanced technology will also help solve some of the nearly 20 unsolved murders in Salisbury, including that of 7-year-old A’yanna Allen.

Laurel to a fresh start in Landis, as the town on Tuesday swore in its first female mayor and two new faces on its board of aldermen.

Including Darrell Overcash filling the unexpired term of the late Bobby Brown, Landis now has plenty of fresh eyes on its town board, something it sorely needed after allegations arose of embezzlement.

Now, the challenge for Landis will be ensuring the fresh-faced board and staff, who voiced concerns about having too much turnover, form a good working relationship. The board must ensure there are checks and balances on staff without becoming adversarial. The staff must embrace transparency.

Editorial: Salisbury on verge of closing out decade by repeating history

History has a way of repeating itself and, as the decade comes to a close, the Salisbury High Hornets are... read more