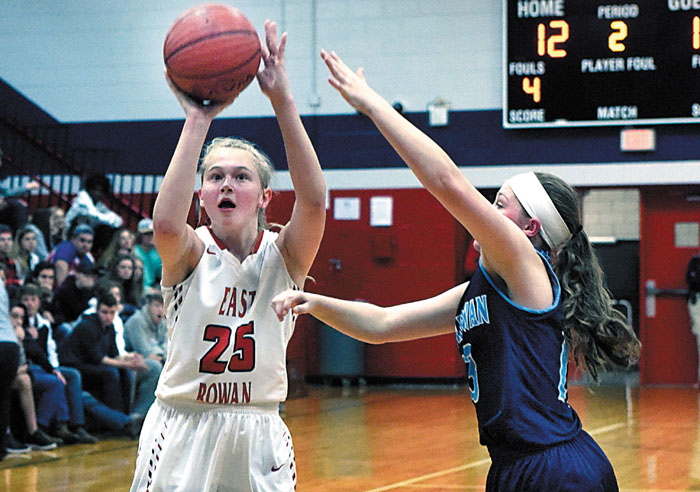 CONCORD — The eighth straight victory for the East Rowan girls basketball team, a 51-44 win at Cox Mill, came with some tough lessons.

“We definitely did it the hard way,” East coach Kevin Holland said.

East had won seven straight games by double digits, with the closest game all season being the 52-41 victory against Central Davidson on opening night.

It looked more of the same on Wednesday at Cox Mill. At least it did for a half.

“We started well enough, went to halftime with a decent lead,” Holland said.

East’s comfortable-looking lead at the break was 25-11, but this was a dangerous Cox Mill team that had scored 70 points in a win 24 hours earlier.

“I told our team it would go one of two ways in the third quarter,” Holland said. “We do what we’re supposed to do to start the half, and then we cruise to a win — or they’re going to fight back.”

Cox Mill (3-6) chose to fight back, ramping up the pressure in the backcourt.

“Not many teams have pressed us and the ones that did haven’t been successful,” Holland said. “But Cox Mill is the toughest team we’ve played. They have taller guards. They pressed us hard. They came out in the second half and hit us in the mouth. and we didn’t handle it. We went in panic mode. The more we tried to calm down, the more we rushed.”

The Chargers came all the way back. They erased the Mustangs’ lead and went up by one.

“I’m not happy that they came back, but I’m happy with how we responded to losing the lead,” Holland said. “Adalie Harrison, Caroline Houpe and Grace Eagle made big 3-pointers. Mary Spry, Leah Hinceman and Haley Dalton battled on the inside.”

Once East stabilized, it was back and forth for several minutes. East went back ahead by a single point after three quarters and won the fourth quarter, 18-12.

Harrison led the Mustangs with 14 points. The senior guard has scored in double figures in every game this season and raised her career scoring total to 798.

“That’s been our formula all season,” Holland said. “We get double figures or close to it from four or five girls. Opponents can’t key on one person.”

East will get back in the gym today, with an eight-game winning streak, but also with some things to work on.

“I’m proud we didn’t fold tonight because a lot of teams would have,” Holland said.  “But at the same time, the way we played, that won’t be good enough against West Rowan or Carson. We’ve got to get better.”