High school basketball: Carson gets a spark from Clark 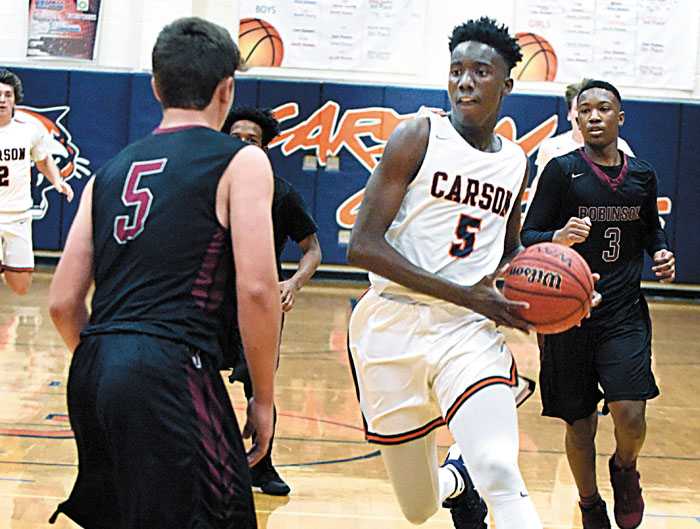 WAYNE HINSHAW FILE PHOTO/FOR THE Salisbury Post ... Carson’s E.J. Clark (5), shown during a game against Robinson in 2018. Clark, a senior, is off to a great start this season, averaging 22 points per game.

CHINA GROVE —  Injury and rehab made him late to the party, so he won’t be 1,000-point scorer, but Carson’s EJ Clark will still leave his mark.

Clark is a 6-foot-4 wing player, but the rangy senior has the wingspan of a 6-9 guy.

He’s been a handful in the early going this season. Carson played its first seven games against Cabarrus schools, including stout A.L. Brown and Central Cabarrus squads, but Clark accounted for 22 points per game.  It’s been a steady 22. Northwest Cabarrus held him to 12 one night, but he’s topped 20 in his other six outings.

“EJ can score it, just a great shooter,” Carson head coach Brian Perry said. “He’s added a lot to his game since last season, putting it on the floor more and finishing over the top of people with those long arms. He can shoot it, but now he also can dunk the crap out of it. He’s a hard kid to guard.”

Clark’s given name is Eric Clark Jr. He showed promise when he started showing up for Carson’s preseason workouts as a freshman.

But there were complications. The youngster was constantly hobbling with pain.

“I hurt myself messing around on a trampoline,” Clark explained. “I did a full split,  and I’m just not that flexible. At first, we thought it was a groin injury, and I kept trying to play through it, and it kept getting worse. It turned out to be a hip injury.”

Significant surgery was required to fix the hip. A screw had to be implanted. That meant a long recovery period. Clark would be away from basketball for 10 long months.

“Missed my whole freshman year, but I was back for my sophomore year,” Clark said.

Carson also had Cole Perry in the junior class right behind those guys.

“Since EJ didn’t have a freshman season and since we did have a lot of seniors, we put EJ on the jayvees as a sophomore to get some valuable experience,” Perry said. “I just didn’t think there would be enough minutes for him on the varsity, but he made a lot of 3-pointers for the jayvees.”

Most of the time, Clark had his way against jayvee competition.

“They wanted me to work on my effort level, and I did,” Clark said. “I  killed ’em on jayvees.”

Carson was expected to be pretty awful last season after graduating that great senior class and entering a rebuilding process, but the people making those predictions didn’t know about Clark.

“You never know exactly how jayvee success is going to translate to varsity,” Coach Perry said. “But for EJ, it translated.”

When Cole Perry made it back fromACL injury, Clark didn’t have to score as frequently, but he still averaged 14.3 points per game. In Carson’s best game of the season, a stunning wipeout of South Iredell, Clark scored a career-best 31. Carson finished 13-12, way better than anyone anticipated.

“I really wasn’t that surprised that I played well,” Clark said. “I always felt like I could play with the varsity guys. Last year, it was just my turn. I took advantage of it.”

Now Clark, who plays for the local Team F.L.Y. in the offseason, has taken another significant jump for his senior season.

“He’s crafty, he’s smart, and he’s getting to the basket a whole lot more,” Perry said. “He’s getting by people.”

Clark shoots it so well from long range that defenses  have to try to take the 3-pointer away from him. That means opportunities to show the rest of his expanded game.

“The more they get up on me, the more it opens things up for me, and I can drive and finish or I can drive and kick to an open teammate,” Clark said. “I have confidence that I can score at the rim, with the mid-range game or from the 3-point line — at all three levels.”

Clark’s rebounding is also improving. He had 14 rebounds to go with his 24 points in Tuesday’s loss to A.L. Brown.

Defensively, his length allows him to guard just about any position.

He has lofty goals for his senior season, but they appear to be realistic.

Carson has started 3-4, but the Cougars have three of the county’s top scorers in Clark, marksman AJ Mauldin (16.1 points per game) and point guard Javon Smith (12.3) and should be competitive all season.

“We’ve played tough teams early and we’ve taken some losses, but we’ve also beaten some tall and athletic teams,” Perry said. “The goal is to be prepared to compete for our conference.”