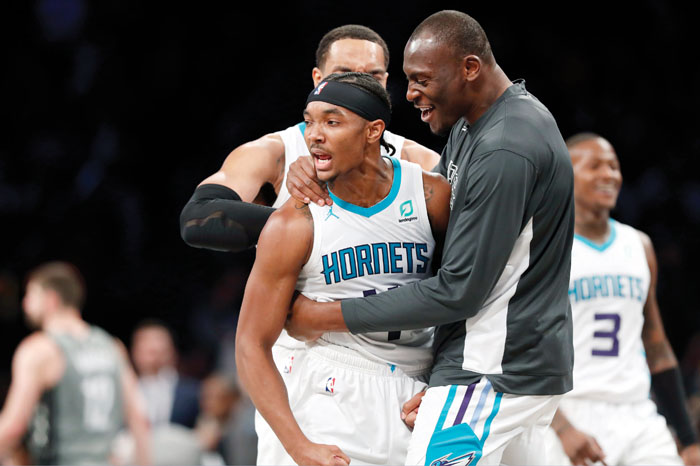 NEW YORK (AP) — Devonte’ Graham scored a career-high 40 points, and the Charlotte Hornets rallied from a 20-point deficit to beat the Brooklyn Nets 113-108 on Wednesday night.

Graham had 27 points in the second half in Charlotte’s second straight victory. Miles Bridges added 14 points.

Spencer Dinwiddie had 24 points and Jarrett Allen added 21 points and 10 rebounds for Brooklyn, who had their three-game winning streak snapped.

Graham hit a step-back jumper followed by a deep 3-pointer to give Charlotte a 111-106 lead with 22 seconds remaining.

Dinwiddie cut the lead to 111-108 by hitting two of three free throws with 18 seconds left, but Bridges made a free throw and the Nets misfired on two 3-point attempts on their next possession.

In the third quarter, Charlotte went on a 21-7 run to cut the deficit to 84-81. Graham led the comeback with 10 points during the run. The Hornets entered the fourth quarter trailing 86-84.

The Nets took a 64-53 lead into the half as Allen led all scorers with 16 points. Graham had 13 for Charlotte, which shot 38% from the field in the first half. Brooklyn took it’s largest lead at 52-32 during the quarter.

Brooklyn took a 34-26 lead after the first quarter while shooting 57% from the floor as Allen led the Nets with 11 points. Charlotte’s backcourt of Graham and Terry Rozier each had seven.

Hornets: Coach James Borrego praised Allen’s development. “He looks to me like a smarter and more active defender this season,” Borrego said. … Nicolas Batum (left hand) and Marvin Williams (right knee) were both out.

Dinwiddie has registered 20 or points 11 times in his last 13 games.

LEONARD BACK IN TORONTO, LEADS CLIPPERS PAST RAPTORS 112-92

Maurice Harkless scored 14 points and Paul George had 13 as the Clippers evened their road record at 6-6.

Before the game, Leonard received his championship ring from the 2018-19 season, when he helped Toronto beat Golden State in six games for the franchise’s first NBA title.

Clippers guard Patrick Beverley scored 11 points in 19 minutes before leaving in the third quarter because of a concussion. Beverley collided with Marc Gasol’s shoulder as the Raptors center was setting a screen.

Anthony Davis had 16 points and 12 rebounds for the Lakers, who have won 13 of 14. Kentavious Caldwell-Pope added 15 points for Los Angeles.

INDIANAPOLIS (AP) — Malcolm Brogdon scored 29 points and Aaron Holiday scored 11 of his 18 points in the fourth quarter to help Indiana rally past Boston.

Indiana trailed 94-84 after three quarters but took the lead for good on the first of Holiday’s two 3-pointers with 4:16 left.

Kemba Walker scored a season-high 44 points and had seven assists — not enough to extend the Celtics’ four-game winning streak.

Indiana snapped a seven-game losing streak in the series.

Domantas Sabonis flirted with a triple-double before finishing with 15 points, 14 rebounds and eight assists. Brogdon closed it out by making all six free throws in the final 17 seconds.

The free-falling Cavaliers have lost eight straight and 14 of 15.

Harden matched Kyrie Irving’s arena record for points in a game, and his fourth with 50 or more this season bailed out the Rockets, who allowed the Cavs to score 24 straight points in the second half.

Cleveland was still up 108-107 when Harden, who came in leading the NBA in scoring at 38 points per game, dropped a floater in the lane. After a turnover by Cavs guard Jordan Clarkson, P.J. Tucker hit a 3-pointer from the corner and Clint Capela (13 rebounds) had a dunk following another Cleveland miscue.