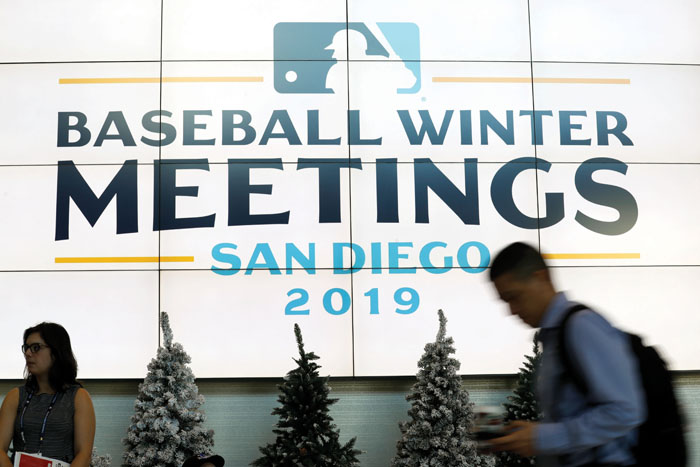 SAN DIEGO (AP) — Jack Wang came all the way from Taiwan, well aware of the hurdles and long odds to pursuing a career in baseball.

All this talk of minor league contraction isn’t shaking him off his dream.

Wang is among over 400 young professionals submitting resumes and networking with executives during the annual minor league job fair at this week’s baseball winter meetings in San Diego. Never mind that Major League Baseball proposed last month to cut 42 of the 160 affiliated minor league clubs after next season. The eager applicants are still hot in pursuit of internships and entry-level jobs they hope will jump-start a lifelong career in sports.

“The most important thing is you need to get a ticket,” said Wang, a 26-year-old with a civil engineering degree who wants to work in sports analytics. “That’s what I’m trying to do right now.”

It’s been an unusual week for the job fair. On the one hand, there have been about 520 job openings posted by minor and major league teams, a record total for the event.

On the other, it’s impossible to ignore MLB’s proposal to chop more than a quarter of the minor leagues, an idea delivered during negotiations with the National Association of Professional Baseball Leagues to replace their contract that expires after the 2020 season.

Minor League Baseball President Pat O’Conner gave a fiery speech to team executives early in the week defending their continued existence, while front office employees are speaking anxiously about their futures over cocktails after dark.

Their predicament has become a national matter, with baseball fans in small towns across the country furious that their hometown team is on the chopping block. Presidential candidate Bernie Sanders has even roasted Commissioner Rob Manfred on Twitter over the proposal.

And yet, the hallways of the San Diego Convention Center remain packed with sharply dressed job seekers bustling from one interview to the next.

“I think it’s the elephant in the room,” fair organizer Paige Hegedus said. “I think they’re probably talking about it, and maybe that is the bar talk. But I think during the day, I think everyone is business as usual.”

A lifelong baseball fan from Taiwan, Wang came to the United States to earn his graduate degree at Penn State before deciding civil engineering wasn’t for him. Instead, he’s here hunting for an internship or entry-level job that may barely eclipse the federal minimum wage of $7.25 an hour.

With savings from the brief time he spent as an engineer, he’s paid roughly $1,000 in airfare and hotels to attend the fair. He’s filed more than 40 applications and landed two interviews. The first became an empty exercise when the team told him it couldn’t sponsor him for a visa, but he asked to continue the meeting anyway, just for the practice.

“That’s a good experience,” he said.

Contraction hasn’t been a consideration. For one, he’s skeptical MLB will follow through on its proposal. Even if it does, his priority isn’t finding a long-term fit. Like almost all his fellow applicants, he’s here for a springboard gig to his dream job.

Emily Gigliotti feels the same. A 22-year-old working on her sports business master’s degree at Temple University, she aspires to manage a major league stadium. She’s in the market for her first sports job or internship, and when a professor suggested the fair to her two weeks ago, she immediately booked a ticket — even though contraction talks were already in the news.

“The people that are here would not be here if they didn’t want to be in baseball, period,” she said. “The contraction is huge and may hit us eventually, but if that really scared some people, they wouldn’t even touch this fair.”

“I just want to get my foot in the door anywhere I can,” echoed Scott Willard, a 26-year-old first-time attendee with a master’s degree in business analytics from Saint Mary’s College. “If something like that were to happen, I can’t really do anything about it.”

David Sarnevitz already has two years of experience in the minors, and the 24-year-old from Massachusetts is hunting for a full-time opportunity. He interned the past two summers with the Vermont Lake Monsters — a club Sanders helped bring to Burlington when he was mayor there in 1984.

Sarnevitz filled various roles for Vermont, operating cameras and video boards, helping with marketing, even cleaning up the ballpark after games. Despite long hours and low pay, he’s committed to being a baseball lifer. If there are 25% fewer jobs for 2021, he plans to make as strong an impression as he can in 2020 to ensure he still has a seat when the music stops.

“I spent the entire summer working in a baseball park,” he explained. “And it’s really hard to understand that unless you actually do that.”