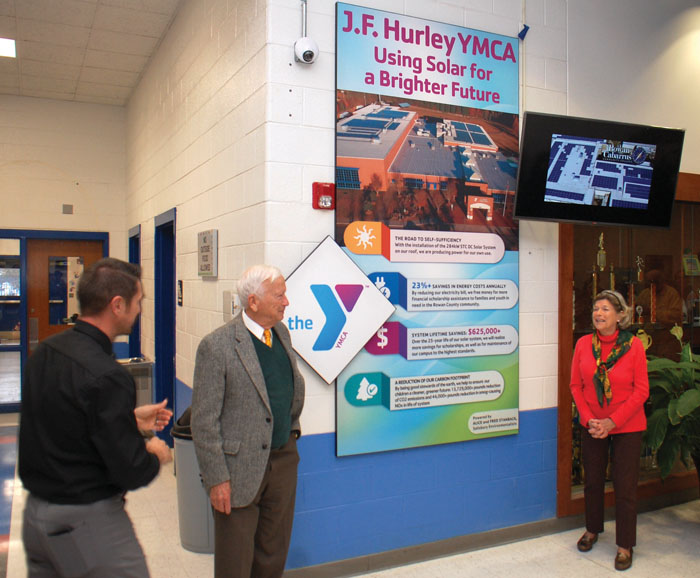 Mark Wineka/Salisbury Post Fred and Alice Stanback stand as bookends Monday to a new display board and monitor in the J.F. Hurley Family YMCA, describing the system installed at the Y to utilize solar energy for cost savings and improving the environment. A gift from the Stanbacks paid for the system. Hurley Y Executive Director Richard Reinholz stands at left.

SALISBURY — The J.F. Hurley Family YMCA is a new planet in the solar system.

The Y’s board of directors and other guests celebrated that fact Monday during a luncheon recognizing Fred and Alice Stanback’s paying for the installation of a 284 kW STC DC solar system on the Y’s roof.

The extensive collection of solar panels have been in place for much of this year, and the Stanbacks also donated the funds needed to repair the roof before the solar system could be installed.

Tom Childress, a member of the Hurley Y board, said Monday’s gathering was to thank the Stanbacks for all they do, and how their generosity on numerous projects has benefited the city, county, state and nation.

The Stanbacks did the honors of unveiling a giant display board in the lobby describing for visitors how the Y has gone solar. Next to it is a television monitor giving some details of solar energy projects elsewhere in Rowan County.

Miller Davis Studio will update the content displayed on that monitor as needed.

Richard Reinholz, executive director of the Hurley Family Y, said he spent all weekend trying to think of what to say about the Stanbacks Monday.

“The best I can do is say thanks,” Reinholz said, telling the couple, “we are so blessed to have you both in our community.”

The Stanbacks are strong environmental and land conservation advocates.

The lobby’s display board itemizes advantages of relying on the solar system, which will produce power for the Y’s own use.

It will lead to more than 23 percent savings in the Y’s yearly energy costs.

Over the expected 25-year life of the system, the Y will save more than $625,000, according to current projections.

Reinholz said it all goes toward reducing the community’s carbon footprint.

“Solar is real and we need to take advantage of it if we can,” Reinholz said.

Reinholz said the financial savings associated over the long term will free more money for scholarship assistance to youth and families, as well as allow the board to reinvest in the facility.

In addition, the Y has goals aimed at better water conservation practices, going paperless and relying on more efficient heating and air-conditioning systems.

Catawba College has nine rooftop systems that when used together will be saving the college nearly $5 million over the next 20 years and $11 million over 30 years.

Other solar farms noted in the monitor display in the Y lobby include ones by Duke Energy near the intersection of N.C. 801 and Old U.S. 70; the O2 Energies Solar Farm in Rockwell off N.C. 152; and the solar panel array at Freightliner in Cleveland.

Assistant Rowan County Planning Director Shane Stewart compiled for Miller Davis a list of 15 solar farms in the county that are operating or proposed for construction.

The biggest developers of these sites include O2 Energies, Cypress Creek and Strata Solar.

Among those attending Monday’s luncheon at the Y were two members of the Hurley family — Gordon Hurley and Gerry Hurley, wife of the late James F. Hurley III.