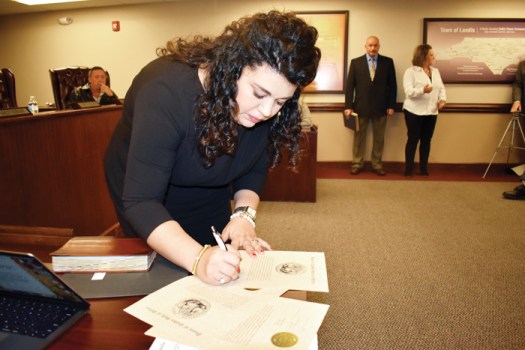 Meredith Smith signs the Town of Landis Oath of Office after being sworn in as the town's first mayor at Monday's Board of Alderman meeting. 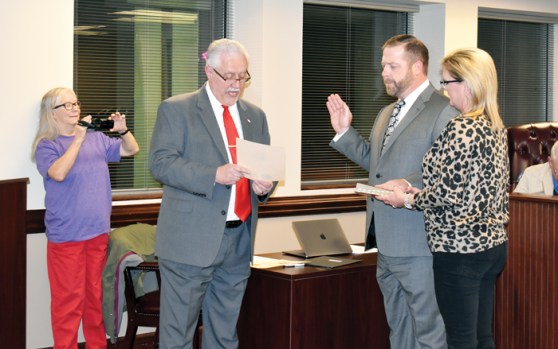 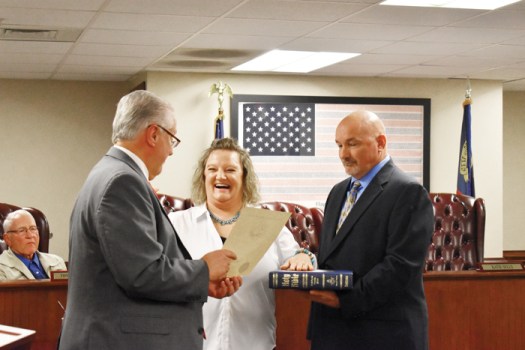 Katie Sells laughs as she is sworn in as alderwoman by state Sen. Carl Ford. 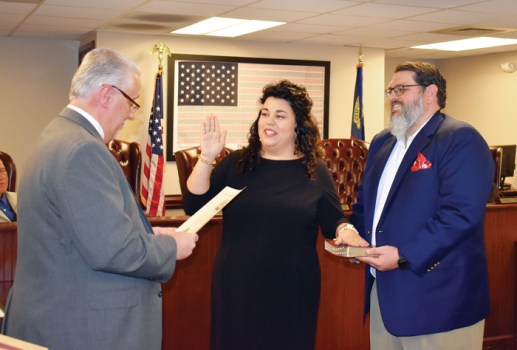 Meredith Smith is sworn in as Landis' mayor at Monday's Board of Aldermen meeting.

LANDIS — Landis made history at its board of alderman meeting Monday, as the town swore in its first female mayor, Meredith Smith.

Smith came out on top in November’s election, with 68% of the vote. Alderman Ashley Stewart and Alderwoman Katie Sells were top vote-getters in the election, too. On Monday, the three were sworn in by state Sen. Carl Ford, R-33. And the board unanimously appointed Stewart to serve as the mayor pro tem.

Smith told citizens the board was going to move forward in a positive direction.

“The town is moving forward, but we have great strides we can take,” Smith said. “I plan on doing that each and every day.”

Smith said there will be some changes with the new board in place.

“Transparency is going to be our key,” she said. “If you have questions, I want you to come to us and ask. I want everyone to be approachable. I think that’s something that we haven’t had and we’re going to move forward with.”

Stewart expressed his gratitude to those who supported him in the election. Stewart said he was ecstatic to work on behalf of Landis citizens to move the town in a positive direction.

“I look forward to accomplishing a lot of things and build on what’s been going good, make changes for the positive for all of you guys, not for us five up here or department heads,” Stewart said. “And be a true steward and extension of what you guys in the town need and want as taxpayers and neighbors.”

Sells thanked voters for the opportunity to serve the town and be the “citizens’ voice.” Sells said she was on the board for the citizens.

Outgoing Mayor Mike Mahaley reflected on the two terms he had served as the town’s mayor.

“I wish I could say every day was great and everything we did was perfect,” Mahaley said. “I can’t say that, because boards are made up of ordinary people, just like me and you and each of you. Looking back, there are a lot of things we did right, and I am extremely proud of it, like stopping the theft, lowering the electric rate and jumpstarting the paving process. There are also things that I wish we would have handled differently.”

He wished the incoming board success, putting political differences aside. He said the board’s success will result in the town’s success.

And he gave the new board some advice, too.

“Take care of the town staff,” Mahaley said. “We have amazing folks that work for this town. I know that because I see them every day. They are the people that keep the lights on, the water running and protect our families. Without out strong staff, we can’t have a healthy town.”

He continued, saying the board should do what is right and not what’s popular. He told the new board to fight for the character and integrity of the town.

“Landis is my home,” Mahaley said. “Landis is your home. Landis is our home. Our town will be as good or as bad as we make it.”

Outgoing Alderman Seth Moore said he wasn’t looking for a legacy when he came onto the board and still is not. Moore said he is proud that he is from Landis. The town is heading in the right direction and change will take time, he said.

Outgoing Mayor Pro Tem Tommy Garver said he kept his same pledge from when he was sworn in four years ago. Garver said he did what he thought was best for the most people.

Corriher said things are looking better for Landis. He said any citizen is welcome to call him.