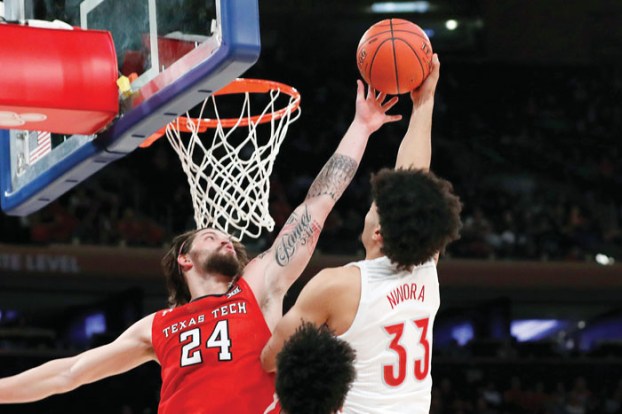 Louisville becomes latest No. 1 to lose, falling to Texas Tech

The Cardinals (9-1) easily played their worst game of the season, shooting an absymal 34 % from the floor and leading scorer Jordan Nwora had only 14 points. Coach Chris Mack let loose his frustration in the Jimmy V Classic game in the final 90 seconds and was whistled for a technical.

Moretti hit a pair of free throws to seal the win and Texas Tech fans sitting behind the basket told security to “move the rope, we’re running on the floor!”

There was no court storming at the Garden — but another AP No. 1 bit the dust in an upset. It’s the third time an unranked team has beat an AP No. 1 this season.

Texas Tech (6-3) played without leading scorer Jahmi’us Ramsey (17.3 points) for the third straight game because of a hamstring injury. The Red Raiders lost four of their top five scorers off the team that took Virginia to overtime before losing in the NCAA championship game last season.

While fourth-year coach Chris Beard could have expected a bit of a transition season, three straight losses, including one at — an albeit, improved and nationally ranked — DePaul made for a rocky start.

Moretti buried two straight 3s midway through the second half for an 11-point lead that gave the Red Raiders the space they needed. Chris Clarke hit another 3 for Texas Tech and it went into a timeout with a seven-point lead.

Louisville could never make a run, and Nwora was held below his 21.4 scoring average. Louisville missed 3s, layups and generally looked lethargic on offense. Down eight, guard Darius Perry was whistled for a charge in the paint and the unraveling Cards were about out of chances.

Terrance Shannon Jr. came down and made a 3 for Texas Tech that had a surprisingly strong turnout of fans going wild. Security did man the baseline to keep the wildly enthusiastic Red Raiders fans at bay.

Beard pointed toward the crowd as he walked toward the locker room and thrust his fist in the air at the friendly fans.

The Cardinals missed 20 of 28 shots overall from the floor in the first half and were limited from 3-point range, the kind of shooting that gave a scuffling team like Texas Tech a chance.

And who knew, the walk-on would lead them.

Avery Benson, one of only three players back from last year’s team, had the Red Raiders fans going wild with a pair of highlight-reel blocks that stunned the Cards. Benson stuffed Nowra, a player of the year candidate, and then finished the half with a monster rejection off a Lamarr Kimble shot at the horn to send the Red Raiders into halftime up 31-28. They led by as many as nine in the half and were in prime position to pull off the No. 1 stunner.

The Garden saw its share of top teams since the season opened: Michigan State in the Champions Classic and Duke in the 2K Empire Classic also were No. 1 in the AP poll in games played at MSG. They aren’t No. 1 anymore — and by Monday’s poll, the Cardinals should be knocked off the perch.

Louisville: The Cardinals will be just fine, though they’ll surely lose their No. 1 ranking. They became the sixth Top 5 team to lose to an unranked squad this season — No. 4 Maryland fell earlier in the evening to Penn State.

Texas Tech: The Red Raiders got the confidence boost they needed and hope the remaining soft nonconference schedule can pad their record before Big 12 play begins in a few weeks.