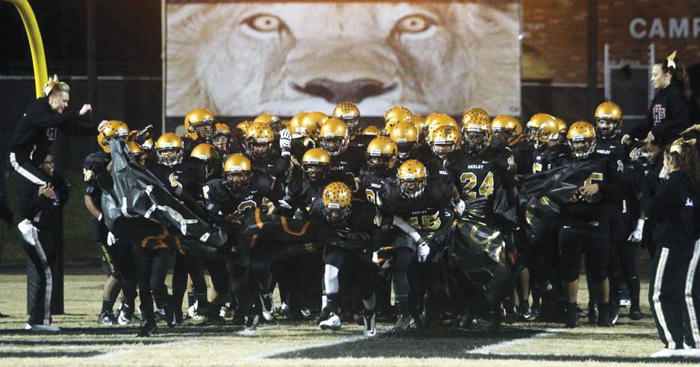 SALISBURY —  When they play in the 11 a.m. state championship at BB&T Stadium on Saturday against Shelby, the Salisbury Hornets will be performing in front of big-time college coaches.

A number of those coaches, including representatives of Michigan, Oklahoma and Stanford, will be there with the main purpose of observing Shelby junior Jack Hollifield.

Hollifield (6-3, 225) plays linebacker for the Golden Lions, but he’s considered a top-10 prospect nationally in the class of 2021 as a tight end. There are some college coaches who see his future as a defensive end or linebacker. He is taller and faster and he’s going to be bigger than his brother, Dax, who is currently a starting linebacker at Virginia Tech.

The father of the Hollifield boys is Aubrey Hollifield, a former Kings Mountain athlete and Wake Forest football player who used to be a football and basketball assistant coach at A.L. Brown. When the late Ron Massey came from Kings Mountain to Kannapolis to coach A.L. Brown’s Wonders in 2000, Hollifield, his right-hand man, came along to assist him.

But Aubrey loves basketball at least as much as football. He eventually would return to Cleveland County to take the reins of Shelby’s strong hoops program. He’s had a great run there, so his children have grown up in Shelby. Last season was Aubrey’s 13th at the helm of the Golden Lions. He won another league title and guided his team to the fourth round of the playoffs.

Jack Hollifield had a 93-yard pick-six in the 2018 2AA state championship, as Shelby beat North Davidson, 42-21, in Raleigh.

Shelby, for many years, played in the Western North Carolina High School Activities Association, and won championships in that four-conference organization in 1968, 1970, 1972 and 1976. Shelby tied North Davidson in the 1975 WNCHSAA title game. Shelby also dropped some legendary WNCHSAA finals, including one to East Rowan in 1969 and one to Salisbury in 1974.

Shelby (13-1) lost to 3A Crest in mid-September, but got rolling shortly after that. MaxPreps ranks Shelby as the state’s eighth-best team now — that’s counting all classifications — and first in 2A.

Salisbury (13-2) is ranked ninth in 2A by MaxPreps and  69th for all classifications.

In the 2AA West bracket, Shelby was the No. 1 seed. Salisbury, seeded seventh in the 2AA East bracket, came through it despite having to play three road games, two of them trips of unusual length. Salisbury won at second-seeded Washington, sixth-seeded Hertford County and top-seeded Randleman.

Salisbury’s defense has been tremendous (8.3 points per game allowed), but Shelby’s spread offense will provide, by far, the biggest challenge to date.

Shelby’s running game is built around 200-pound Omar Phillips, a bruiser who has accumulated 820 rushing yards and 17 TDs. Scatback Donye Fuller has 683 rushing yards and 10 TDs. He had over 1,000 yards last season, but missed the early games this year with an injury.

Quarterback Isaiah Bess, who holds many school records, is one of the state’s most prolific throwers. He fired three TD passes and took home the MVP award from last season’s 2AA state title game.

Bess is 178-for-303 this season for 3, 401 yards. He has an astounding 41 touchdown passes and has offers from Gardner-Webb and Charleston Southern, among others.

Kicker Caden Sheeley has kicked 71 PATS (he’s missed eight) and is 4-for-5 on field goals. His range is about 40 yards.
Defensively, Shelby’s stats are almost as strong as Salisbury’s. Shelby allows under 200 yards per game and is equally fierce against the run and pass. Shelby has allowed 13.8 points per game.
Leading the front four  for coach Mike Wilbanks’ Golden Lions is sophomore Malaki Hamrick, who has offers from West Virginia, Appalachian State and Coastal Carolina.
Hollifield leads the linebackers. A long list of schools has offered him, including Michigan, Virginia Tech, UNC, N.C. State, Wake Forest, South Carolina, Tennessee, Vanderbilt, East Carolina, Maryland and Virginia.
Senior linebacker Nick Stites has an offer from Gardner-Webb.
In the defensive backfield for the Golden Lions, Tyler Arrington has six interceptions, while Torrian Arrington has four. Senior safety Dashaun Christopher is considered a leader of the defense.
So Shelby brings a wealth of talent into the contest.
Salisbury won as a 6-point underdog at Hertford County and won as a 3-point underdog at Randleman. Salisbury also won a game at Washington, in which the Hornets were the lesser seed (7 vs. 2) but were slightly favored by the Massey Ratings system.
The Massey Ratings system lists Salisbury as a 30-point underdog on Saturday — the biggest underdog in any of the eight championship games — but the Hornets have thrived on proving people wrong all year.