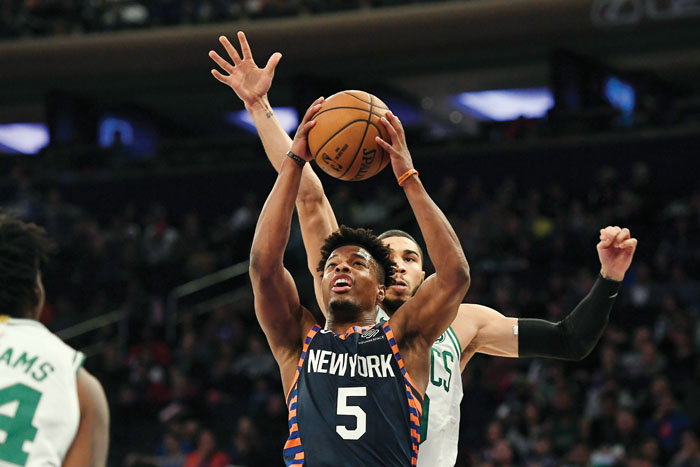 By AARON BEARD AP Basketball Writer
RALEIGH (AP) — North Carolina State is challenging NCAA charges based on allegations that an Adidas representative paid $40,000 to the family of former basketball star Dennis Smith Jr. through a former Wolfpack assistant coach to ensure Smith’s commitment to the school.
N.C. State is arguing that the NCAA has not proven money was actually provided to Smith or his family, noting that Smith — who entered the NBA draft after one year in Raleigh — denied receiving money in an interview with the school earlier this year.
The school released its response Monday to four violations filed in July by the NCAA in the wake of college basketball’s corruption scandal. A key element of those charges was court testimony last year by government witness T.J. Gassnola that he delivered $40,000 to former Wolfpack assistant coach Orlando Early intended for Smith’s family in 2015.
The NCAA has alleged that Gassnola was acting as an outside consultant for Adidas — which has an apparel deal with the school — with the goal to “ensure Smith’s commitment” to the Wolfpack.
But the school’s response questions Gassnola’s credibility and states there is no corroborating evidence to support his “vague testimony.” Additionally, the school argues that $40,000 wired to Gassnola in October 2015 did not come from Adidas. University officials say the money came from Martin Fox, described as someone “affiliated with professional basketball player agents and business managers” with no apparent relationship with Adidas.
“The logical conclusion is that Fox attempted to secure Smith Jr. as a client once he turned professional,” the school’s response states.
N.C. State also argues the rest of the case, focused largely on improper complimentary admissions on the men’s basketball guest pass list, doesn’t rise to major violations. The school states that all but 10 of 160 allegations of improper complimentary admissions would have been permissible had they been handled in a different way procedurally.
The school self-imposed minor penalties for the remaining charges, including a future scholarship reduction, recruiting restrictions and a $5,000 fine.
Much of the case centers around Early, though former head coach Mark Gottfried is charged under the NCAA provision of head-coach responsibility for violations within his program. Current coach Kevin Keatts, who replaced Gottfried in March 2017, and his staff have not been accused of wrongdoing.
N.C. State is the first case tied to college basketball’s corruption scandal to make its way through the NCAA infractions process. Kansas also faces NCAA charges after being named in a federal criminal case involving improper payments to recruits and their families, which grew out of an FBI investigation into Adidas.
Schools have a 90-day deadline to respond to charges filed in a Notice of Allegations, though the NCAA in September suspended all deadlines for cases related to federal corruption investigation into the sport. N.C. State was roughly two weeks from its October response deadline at the time, and the NCAA last month set a new response deadline for Monday.
Now the NCAA enforcement staff has 60 days to file its own response, which typically leads to a hearing with a panel of the infractions committee followed by a ruling weeks to months later — a schedule set to carry this case through the rest of the college basketball season.
___
More AP college basketball: https://apnews.com/Collegebasketball and http://www.twitter.com/AP_Top25
___
Follow Aaron Beard on Twitter at http://www.twitter.com/aaronbeardap