High school basketball: West boys are better in a lot of ways 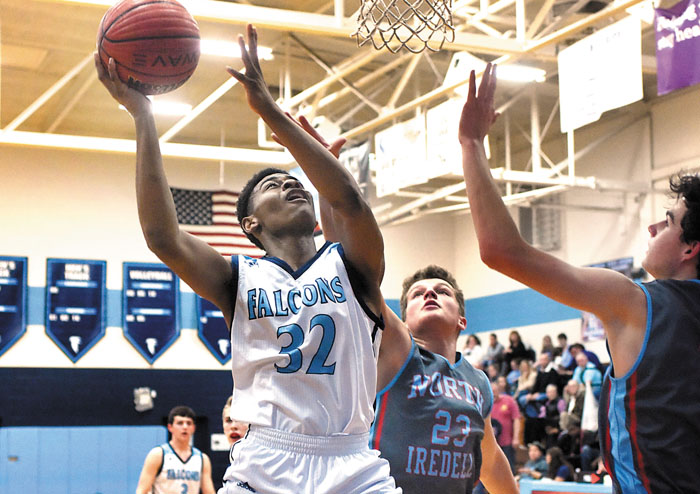 MOUNT ULLA —  On Senior Night last season in Mount Ulla, West Rowan couldn’t have played any better or any harder — and still lost to Statesville, 71-68.

It was a tough season, the toughest one that coach Mike Gurley, a recently inducted Salisbury-Rowan Hall of Famer, has ever had. The Falcons started off 0-11 and fell 21 times, including six losses to Rowan opponents. The losing streak to rival Carson stretched to six games. The Falcons lost a pair of two-point games to East Rowan.

“I still loved last year’s team,” Gurley said. “They gave me everything they had.”

The Falcons figure to win a lot more often this season, if Gurley can get a talented crew with diverse backgrounds to play together.

On paper, West is significantly bigger, faster, quicker, rougher and deeper than it’s been the past two seasons. West lost a lot of smooth jump shots when  Zack Brawley and Payne Stolsworth graduated, but this season’s version of the Falcons should defend better and rebound better.

The addition of 6-foot-5 senior Chaz McCombs is huge. McCombs, a stellar defensive end for the football team, played varsity ball as a freshman at North Rowan before he competed very well for West Forsyth at the 4A level. McCombs can score, defend and rebound as the ideal high school power forward, but most importantly, he brings a fierce mentality.

With the addition of McCombs, West will have two large guys on the floor most of the time. The other post player will be 6-7 Zeke Biggers or 6-5 Jonny Hassard. The two football standouts will rotate. Hassard is really big, while Biggers is bigger than big. He’s enormous. Both take up a lot of space. Both are surprisingly agile athletes. Biggers scores more consistently, but they both rebound.

Jay Joseph, a 6-footer,  brings a lot of experience to the table and has scored in double figures many times in the past. He’ll play a lot at small forward.

The leading scorer for the Falcons likely will be junior Jalen Moss, who transferred from Salisbury and appeared on the West varsity down the stretch last season. Moss scored 21 against Carson last year.

Ty’Kese Warren is an excellent athlete, a physical 6-3 football receiver who can score and is willing to compete on the glass.

Macari Allison is a shooter who will knock down 3-pointers for the Falcons, while Dyshawn Cooper, who came to West from Georgia, is a smooth lefty who will also help out in the scoring column.

Football DBs Reggie Everhart, Quay Weeks and Will Moseley will provide energy and speed off the bench.

Justin Currie and Kendrel Douglas will look to carve out roles. Douglas, who played for A.L. Brown’s jayvees last season, may not play a lot this season, but Gurley says he has a bright future as a zone-buster.

West’s football team reached the third round. Seven of those players joined the basketball team, so the Falcons had limited practice time before this season started.

They lost on opening night at strong A.L. Brown, 90-74, but that game was a lot closer than it sounds. West handled North Rowan by 16 at home in its second outing, and beat Robinson by 10 in its third game.

With Moss coming through and with Biggers dropping in 25 points in the last two games, the Falcons haven’t had much trouble scoring.

Gurley is upbeat. He believes the Falcons have the horses to put together a bounce-back season.

“I think we can contend for the championship in our league,” Gurley said. “It’s nice to have a chance.”