High school basketball: Tall North boys have a chance to be great 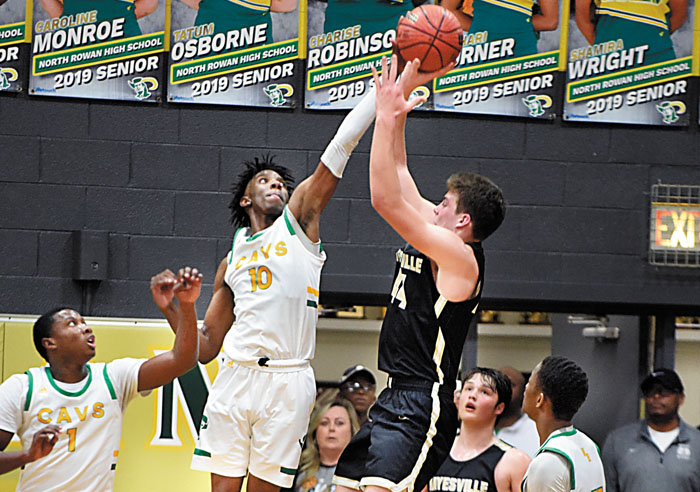 Are the Cavaliers rebuilding — or simply reloading? That’s a question we won’t know the answer to until January.

“Obviously, we lost a ton of talent,” said North coach Jason Causby, who achieved his 200th coaching triumph in Rowan County on Friday. “But we can be a very good team.”

Adding to North’s challenge for this basketball season was an extended football campaign that lasted to the third round of the 1AA state playoffs.

“You’re always happy when there’s football success, but as far as basketball, that meant we were waiting on eight guys,” Causby said. “We basically had a tryout day, with cuts at the end of it. Then we had one day of practice. Then we were playing.”

North struggled in its opener, scoring 49 and losing at West Rowan, but bounced back two nights later to score 75 and beat Albemarle.

There are some returners, but basically it’s a brand new team because familiar faces such as Kendrell Goodes, who started last season and averaged 5.4 points per game, and Xzaviar “Zay” Davis and Denerio Robinson, who were the first men off the bench. are going to be cast in completely different roles. Those three Cavs can no longer rely on Cooke and Goodlett to fill it up. They’re no longer fourth or fifth options. They’re going to have to be more aggressive offensively.

Playing receiver for the football team helped Goodes as far as being physical. At 6-foot-4, he can rebound and block shots and has a developing offensive game. He’s a junior, but this will be his third varsity season, so he’s been in a lot of tough games.

Robinson, a 6-5 football receiver, is a prime candidate for a breakout season as a senior. He can play power forward or center. He has nice post moves and a solid face-up game. He should average double figures.

“He was our most consistent player all summer,” Causby said.

Davis isn’t tall, but he’s a fantastic athlete, quick and strong. The junior guard should be able to defend just about anyone close to his height and his offensive game is better than people realize.

“He plays as hard as anyone, and he plays very big for his size,” Causby said. “He’s making more jump shots, and he’s going to be really important for us defensively.”

Brandon Jefferson, a 6-5 swing man, is a senior transfer from East Rowan, where he played on the varsity since his freshman year. He’s an interesting player who entered this season with 484 career points, a lot more than any of his other new teammates.

“He’s a big guy, but he has that small man’s skill set,” Causby said. “He handles the ball well and sees the floor. He’s an unselfish passer. He can score in a lot of different ways.”

Brandon White, who was on the varsity as a freshman but didn’t play much, should be ready to make large strides, figuratively and literally, as a sophomore. He’s almost 6-foot-10, so he’s drawing quite a bit of recruiting interest.

White is improving his ball-handling daily, going through North’s drills for guards, and there’s not much doubt, he’s going to be a serious player. Whether it all comes together for him this season remains to be seen, but it’s going to happen at some point.

North is extremely tall for a 1A public school team, with White. plus those three forwards who are in the 6-4/6-5 range.

“Our size should make it hard for teams to score on us and we should be good on the glass as far as getting offensive rebounds and as far as holding teams to one shot,” Causby said.

North still has to get the ball down the court and has to get it where it needs to go on offense, so sophomore point guard Quashawn Carpenter will be a critical player.

“He’s pass-first and understands his role as a point guard,” Causby said. “But he’s also someone who can make shots.”

Jaharion Graham, an athlete on par with Davis, was the junior varsity MVP and moves up. He’ll be in the guard rotation and has the quickness, toughness and strength to be a defensive stopper.

James Gladden, a quick football receiver, will get minutes in the backcourt.

Pharell Hailey, who is 6-5 and super-athletic, could find a role as an energy guy off the bench. He can rebound and defend.

Rounding out the squad will be Kyree Sims, the football QB, Amir Watkins and Kendal Mitchell. In those one-sided YVC games, they’ll get plenty of opportunities to show what they can do.

“We’ve got our strengths, but we’ve also got our deficiencies,” Causby said. “Experience is a big thing and chemistry is a big thing, and those are things that take time. We’re not even good yet, but by January, our goal is to be great.”

North’s team set the bar high last season at 28-3. It was a fun ride, but as powerful a team as it was, it fell short of the state championship game.

North obviously aspires to be that good again this season at it has scheduled Bishop McGuinness at Catawba (that will be a rematch of last year’s regional final loss) and will welcome Moravian Prep and N.C. State-bound Josh Hall to Spencer. Causby played high school ball at West Rowan, with Hall’s 6-foot-11 father, Quincy Hall.

“We’ve beefed up the schedule quite a bit,” Causby said. “Our goal is to prepare to win a state championship.”

High school basketball: West boys are better in a…