Despite loss to Atlanta, Panthers will stick with QB 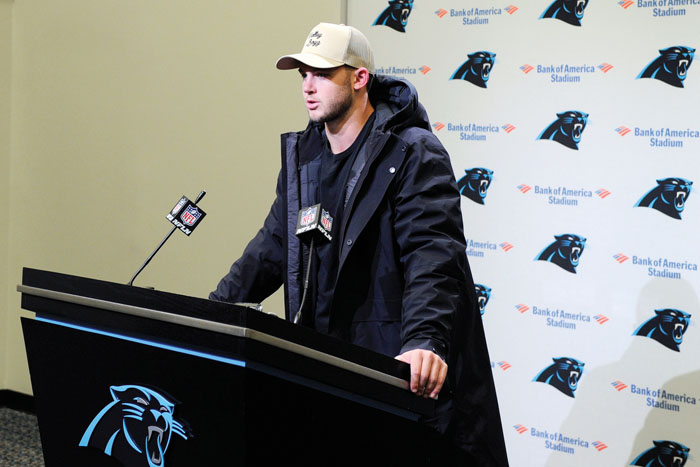 CHARLOTTE (AP) — The Panthers have lost five straight games and are out of playoff contention, which would appear to be a perfect time to get a look at rookie third-round draft pick Will Grier.

But that won’t happen — at least not this week.

Interim coach Perry Fewell said Monday the quarterback situation will be evaluated on a week-to-week basis, but that right now the team is sticking with Kyle Allen this week against the Seattle Seahawks because he give the team the best chance to win.

But is that what it’s really about? Shouldn’t the Panthers be finding out what they have in Grier, who hasn’t taken a regular-season snap from center?

If the Panthers decide to move on from Cam Newton this offseason — they can save $19 million under the salary cap by trading or cutting him — then they will need a plan in place under center.

Allen has struggled in the past five games with his decision-making and turnovers.

The second-year QB has lost six of his past seven starts and was part of a team that turned the ball over four times in a 40-20 loss to the Atlanta Falcons. It’s the second time the Falcons have routed Allen and the Panthers, beating them 29-3 last month.

Grier is the great unknown.

When the former West Virginia quarterback and local Charlotte-area product came to Carolina, former coach Ron Rivera basically said Grier wasn’t quite ready to be a starting QB in the NFL. But if Grier doesn’t get any playing time it will be difficult for the Panthers to decide if he or Allen — or someone else — will become the quarterback of the future.

While the losses keep piling up, there has been no quit in Christian McCaffrey’s game. The third-year running back continues to put up solid numbers. McCaffrey had 11 receptions for 82 yards and 11 carries for 53 yards on Sunday. About the only drama, per say, left in Carolina’s season is whether or not McCaffrey becomes only the third running back in NFL history to have 1,000 yards rushing and 1,000 yards receiving in a season. He already has a career-high 1,220 yards rushing and needs 274 yards receiving in the next three games to join Marshall Faulk and Roger Craig in that elite club.

It’s not hard to figure out why the Panthers have lost five straight. Over that stretch, Carolina has turned the ball over 13 times while forcing just one takeaway. On Sunday, Allen threw two interceptions and the Panthers fumbled twice while not forcing any turnovers on defense. Allen has thrown 12 INTs in his past seven games after beginning his career with zero in his first five starts. “It’s just kind of the same things,” Allen said. “Just shooting ourselves in the foot.”

TE Ian Thomas. With Greg Olsen in the concussion protocol, Thomas stepped into a starting role at tight end and had five receptions for 57 yards and a touchdown against the Falcons. But Thomas also had a costly mistake, bobbling a well-thrown pass from Allen that resulted in a Falcons interception. Had Thomas cleanly caught the ball, the Panthers would have had a big gain. That interception aside, Thomas has the skills to be a dynamic tight end in the NFL. Thomas hasn’t played much despite a solid rookie season a year ago in which he had 33 receptions with Olsen sidelined with a foot injury. But he will get his chance now with Olsen out.

“We sent everybody,” Jackson griped of a 93-yard touchdown pass from Matt Ryan to Olamide Zaccheaus. “Zero coverage. No help. Backed up. With a quarterback like that? I don’t care if you’re Champ Bailey or any of those cornerbacks on the 100 (greatest players in NFL history) list, that’s a play that’s hard to make for any guy. Especially with a quarterback like Matt Ryan.”

Jackson was also upset about the call on a TD pass to Calvin Ridley, saying the team didn’t practice that defensive look during the week.

Fewell, who made most of the calls on defense on Sunday, said he spoke to Jackson about the remarks. He said that the matter will be handled internally and that he was “disappointed” Jackson aired his concerns to the media instead of talking to coaches.

Panthers star linebacker Luke Kuechly left the game briefly after getting hit in the knee, but did return Sunday and led the team with 11 tackles and had one pass breakup.

50 — Number of sacks allowed this season by the Panthers, second most in the NFL to the Miami Dolphins (51). Carolina gave up five more against the Falcons on Sunday. Offensive line will be an area the team needs to focus on upgrading in the offseason.

The Panthers (5-7) have lost five straight and are playing out the string. It’s a chance to get a look at some young players and help the front office make some decisions for next season.