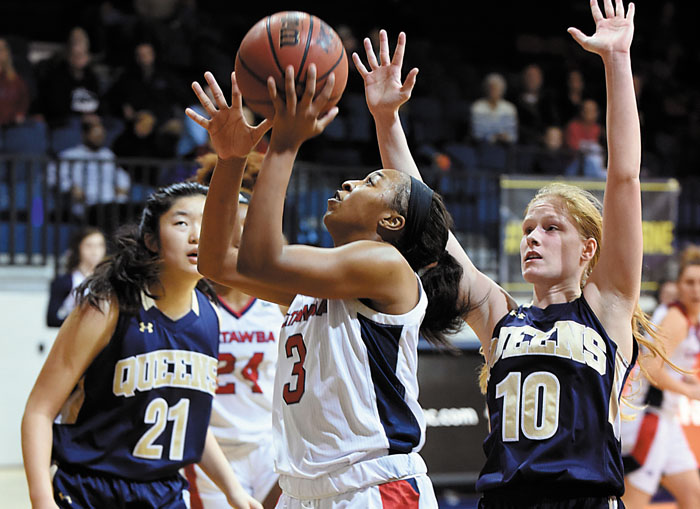 SALISBURY —  Catawba’s women’s basketball team is 7-0 and 3-0 in the South Atlantic Conference, and on Saturday night, junior guard Taisha DeShazo broke the school single-game record with 42 points — 30 in the second half.

Catawba credits a charter bus driver named Bryan Johnson for a lot of the good things that are happening.

“My dream school always was VCU, but I didn’t get recruited by them,” DeShazo said. “Radford showed a little interest.”

As a junior in 2016, DeShazo led the Magna Vista Warriors to the 3A state championship game against Spotswood. The game was played in Richmond at VCU’s Siegel Center. Spotswood won, 40-39. Johnson was the driver who transported the Magna Vista team on the 180-mile ride from Ridgeway to Richmond. A basketball fan, he watched the game. His jaw dropped when he saw DeShazo.

Fortunately for Catawba, Johnson is also the regular charter bus driver for its women’s basketball team.

Terrence Baxter was Catawba’s assistant coach then, but he handled a lot of the recruiting. Johnson called him. “I’ve got a player for you,” Johnson told him.

Baxter gets that a lot. Just about everyone has a player for him, but he knew Johnson and he knew if Johnson said he had a player, he had a player that was worth checking out. Baxter scheduled a recruiting trip to watch Magna Vista play during DeShazo’s senior season.

DeShazo, who led her team back to another championship game and another runner-up finish as a senior, wowed Baxter.

“I knew our head coach, Angie Morton, would love her, and I could see she was a difference-maker,” Baxter said. “I didn’t even have to call Angie. I offered her a scholarship on the spot.”

That’s when DeShazo broke the news to Baxter that she’d already decided to commit to Tusculum.

Baxter didn’t give up. He convinced DeShazo to visit Catawba, to tour the campus, to watch a game at Goodman Gym.

When Morton went to see DeShazo play for herself, she smiled and told Baxter, “Good call.”

DeShazo says it wasn’t a hard decision to switch to Catawba.

“Catawba had the same colors as my high school and even used the same chant the Magna Vista Warriors used,” DeShazo said. “Just meant to be.”

In her first college game for the Indians in the fall of 2017, DeShazo scored 23 points in 27 minutes, starting on a senior-laden team.

The next night she took just two shots.

She was sensitive, worried about over-stepping her place too soon. Catawba had veteran stars such as Terri Rogers and Serena Brown. DeShazo didn’t want to step on any toes.

Catawba was average that season (14-14), but DeShazo started half the games and averaged 7.1 points. She made the All-SAC Freshman team.

As a sophomore last season, Baxter’s first as head coach, DeShazo’s role was vastly different. She had to score for Catawba (13-15) to have a chance to win, and she responded with a team-high 13.2 points per game and added 6.6 rebounds.

“There were a few times when she ran from the big moments, veered to the back row when we wanted her to take over,” Baxter said. “She wasn’t perfect, but she still was very good. She was one of the better players in our league. I was as surprised as anyone when the accolades for the conference came out and we didn’t have anybody on the All-SAC first team or the second team or even Honorable Mention. Does Taisha have a chip on her shoulder about it, yes, I think she does, and she should have.”

Eighteen players were recognized by the SAC. None of them were Catawba Indians.

DeShazo and her classmate and teammate (former A.L. Brown star) Shemya Stanback stayed in Salisbury over the summer, working on their games relentlessly.

“It’s not a coincidence that they’ve been our two best players so far this season,” Baxter said. “They put in the work.”

When the preseason All-SAC teams were announced prior to this season, Catawba was picked sixth. DeShazo was voted to the All-SAC second team.

At Catawba’s Midnight Madness exhibition to tip off this season, DeShazo showed how much time she’s put in on her jump shot. She won the 3-point contest against Catawba’s guys, and Catawba’s men have some shooters.

Catawba’s women are much deeper this year. The freshman have helped. Veterans have improved. Baxter has accelerated the pace, running, pressing and often playing 14 or 15. It’s the system he learned from innovative coach Dave Davis when he played at Pfeiffer. The plan is to force a pace that is so furious that it eventually breaks the will of opponents.

“If we get down 10, get down 12, get down 15, even, we’re not all that worried about it,” Baxter said. “You have to trust the system and what the system will do. There are going to be so many possessions that we can always come back. We’re like the gnats at the picnic that won’t leave your burger alone.”

Saturday, when UVa-Wise visited Goodman Gym, the system was tested.

At least a half-dozen Indians had exams on Saturday. Some finished at 6 p.m., with game time set for 7 p.m. DeShazo, an exercise major, had one exam Friday, but she didn’t have one Saturday. She was well aware that some of her teammates might not have 100 percent focus on the court after a challenging day in the classroom. She knew she might have to do even more than usual.

DeShazo had 12 points in the first half, but the Indians shot miserably in the second quarter and trailed 44-32 at the break.

Baxter wasn’t frowning. The pace was crazy, and he was confident it was going to take its toll.

“We knew what we needed to do,” DeShazo said. “We had to pick it up on the defensive end. If we picked up the defense, the offense would come. And it was going to have to start with me. A lot of my teammates look to me to lift them up.”

It helped that the Indians started the third quarter with six quick points to get right back into it. a A DeShazo jumper cut the deficit to 44-38.

A steal and layup by DeShazo sliced the margin to 49-44.

DeShazo assisted on Anna Gardner’s 3-pointer that cut the visitors’ lead to 54-53. Lyrik Thorne’s defensive rebound, push and pass set up the DeShazo 3-ball that put Catawba on top, 56-54.

Catawba would roll up 46 points in a wild and extraordinary third quarter — with zero turnovers.  UVa-Wise was outscored, 46-17. The Indians made 15 of 21 field goals. DeShazo had 18 points in the quarter, making three 3-pointers, three 2-point field goals and three free throws.

Baxter remembers looking up at the scoreboard and seeing DeShazo had 28, a pretty great night. A few minutes later, he looked up and she had 34, and he started thinking records could happen.

“There are times when it’s OK to be a little bit selfish,” DeShazo said. “I’ve learned that. Sometimes you have to score for the team to win.”

She put in 12 more points in the fourth quarter, as the Indians wrapped up their seventh straight victory. The final was 101-86.

DeShazo made two free throws with 1:38 remaining to match the total of 41 points that Catawba Hall of Famer Danyel Locklear scored at home in 2003 against Presbyterian and that Bri Johnson scored at Carson-Newman in 2016.

“I was kind of shocked at the 42 points, at breaking a school record,” DeShazo said. “I didn’t really know it until we got to the locker room, and everyone was shouting and cheering.”

There were accolades for DeShazo such as SAC Player of the Week for DeShazo on Monday, but the chip will remain on her shoulder.

She probably already holds unofficial career records for the number of times her name has been mispronounced and misspelled, but her days of being relatively unknown are probably over. She’s averaging 18.3 points per game.

Mars Hill is next for the Indians. They’ll make that trip on Saturday. Bryan Johnson, who started the chain of events that brought DeShazo to Catawba, probably will be the bus driver.

“I thank him every single time I see him,” DeShazo said.