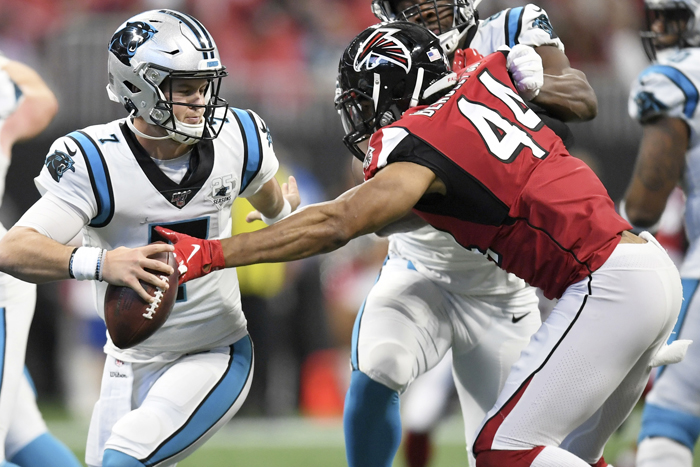 By GEORGE HENRY
Associated Press
ATLANTA  — The Carolina Panthers have endured some rough stretches in the past two years.
Linebacker Luke Kuechly believes this last week was probably the toughest.
Not long after his team lost 40-20 to the struggling Atlanta Falcons, Kuechly tried to assess what it’s been like for Carolina the past few days with ninth-year coach Ron Rivera getting fired and the Panthers (5-8) losing their fifth straight game.
Making matters worse, Sunday’s loss eliminated Carolina from playoff contention for the second straight year.
“It’s been difficult, but I think guys have been resilient,” Kuechly said. “I think guys were sad and bummed out Tuesday and Wednesday and guys certainly missed Coach Rivera and everything that he’s brought to this team and this organization, but I honestly thought we had a good week of practice. Guys were focused. We’ve just got to do a better job obviously moving forward.”
Quarterback Kyle Allen, who was sacked five times, lost a fumble and threw two interceptions, the first of which bounced off tight end Ian Thomas’ arms and right toward Falcons safety Damontae Kazee.
Carolina trailed Atlanta (4-9) by three points at halftime before falling apart. Allen’s fumble came on the third snap of the third quarter, and the Falcons were up 20-10 five plays later on Devonta Freeman’s 13-yard run. That marked the first of two rushing touchdowns the Panthers allowed, giving them an NFL-high 24 this season.
After punting on their next possession and giving up a 93-yard touchdown pass, Carolina lost a fumble on the ensuing kickoff when Kazee delivered a hit on return specialist Greg Dortch, who had been promoted Friday from the practice squad.
The Panthers, who have lost 15 of their past 21, were without tight end Greg Olson, sidelined by a concussion, and left tackle Greg Little, out with an ankle injury. The defense lost reserve pass rusher Marquise Haynes to a knee injury during the game and after the game he limped out of the locker room on crutches and wearing a brace.
Interim coach Perry Fewell indicated Allen will continue to start at QB with Cam Newton sidelined by a season-ending foot surgery. The other alternative is rookie Will Grier, a third-round draft pick who has yet to debut.
“You know we’re on a prove-it basis,” Fewell said. “We’re day to day, as you well know. We’re week to week. I’ll never say never, but with our situation the way it is right now, I think he gives us the best opportunity.”
Allen dropped to 5-6 as Newton’s replacement and 0-2 against Atlanta.
“I mean it’s really frustrating. You see earlier in the year all the potential that we have, but we just can’t get all the pieces put together,” Allen said. “It is really frustrating to come in every Sunday, put in good work, put in good practices and have a good energy and vibe going into the game just to have these mistakes pop up. It’s very frustrating.”
It’s been that way too often for Carolina, which was 6-2 last year before losing its last seven and began this season 5-3 before the current skid began.
The Panthers had no takeaways, gave up 461 yards and sacked Matt Ryan just one time.
“You have to get past those numbers,” Fewell said. “That’s the key to winning in this league. We emphasize throughout the week about protecting the football offensively and special teams-wise. We emphasize taking away the football defensively. That didn’t happen today. We just have to reset, start again and get the mindset that we’re not going to turn that football over and that we’re going to take that football away.”
___
More AP NFL: https://apnews.com/NFL and https://twitter.com/AP_NFL