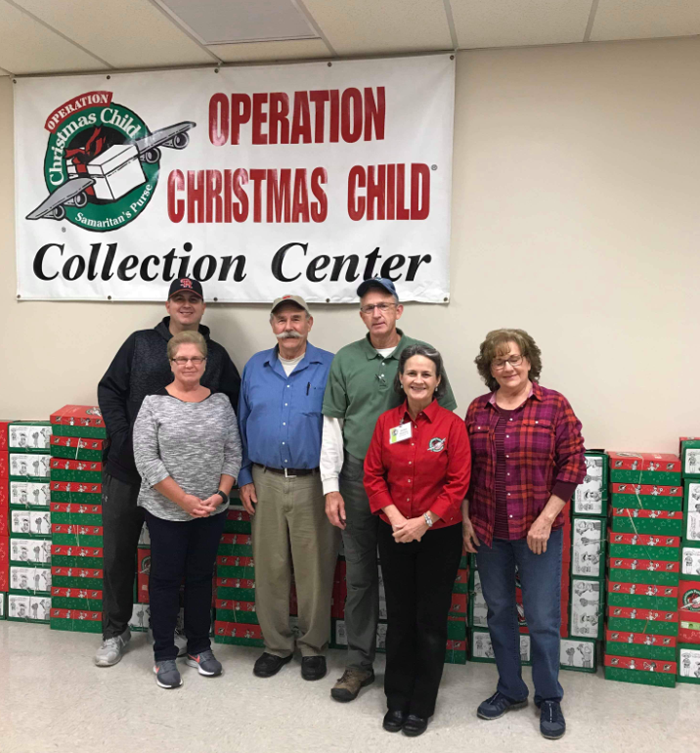 Debbie (in red) and Gary Brumley (green shirt) are the coordinators at Kannapolis’ Central Baptist Church. They are surrounded by a group of volunteers at the Central location drop-off site. Photo by Alyona Eakes

Who would have thought that a simple shoebox could make such an impact on children around the world?

During the summer of 1993, Samaritan’s Purse president Franklin Graham received a call from a man in England asking his help on behalf of children in Bosnia who were suffering because of a brutal civil war. Since then, Samaritan Purse’s project, “Operation Christmas Child,” has collected and delivered more than 168 million shoeboxes filled with small gifts for children in more than 160 countries and territories. The headquarters for Samaritan’s Purse is in Boone, where president Franklin Graham lives.

The shoeboxes are filled with toys, school supplies and hygiene products and delivered to children in need around the world to share about Jesus Christ and God’s love. For many children, it may be the first gift they have ever received. 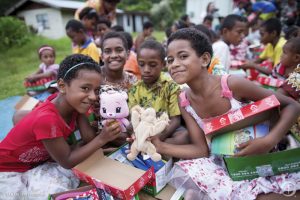 Children in other countries delight in receiving a shoebox. Photo courtesy of OCC

Alyona Eakes was one of those children who received a shoebox as a child. She shared her story of growing up with no running water or electricity. Her dad passed when she was only nine and her mom passed a year later. Alyona’s grandmother could not support her, so she went to live with her sister in the city when she was 10 years old. Cancer took her sister’s life so Alyona was taken to “The Ark” to live, an orphanage in Kiev, Ukraine.

A beautiful story began to unfold. One of the caregivers at the orphanage invited Aylona to go with her to her home church before Christmas. She told Aylona that she would get a surprise after church. She was given an Operation Christmas Child shoebox. Aylona said, “It felt like a chest of gold when I opened it. The smell was so special. Everything was new.”

She described the items inside: a little white lamb, a small Bible in English, colored pencils, two coloring books and other gifts. She had just begun learning about God and she felt like God spoke to her through the shoebox. Aylona said that the shoebox gave her hope because she did not have any family close by and she was grieving after her grandmother passed.

When Alyona was 11, her caregiver told her that a lady was interested in adopting her. The lady had been traveling to Ukraine since 1994 on mission trips with a group from her church and spent time with Alyona and other children at the orphanage. The adoption came to fruition the next summer when Alyona turned 12 and she came to the U.S. to live in 2007. Aylona talked about the first winter at her adoptive mom’s church. The OCC shoeboxes were brought in for people to fill. Aylona learned the meaning behind the shoeboxes and her family has been participating in this project ever since.

Aylona is a Full-Circle Speaker for Samaritan’s Purse. This means that she received a shoebox as a child and has accepted Christ as her savior; completing the “Greatest Journey” discipleship program and now she is sharing her story and speaking at churches and events. She lives in Fuquay-Varina and recently graduated from Campbell University with a bachelor of science degree in criminal justice. She is currently in law enforcement training.

This year, Operation Christmas Child hopes to collect enough filled shoeboxes to reach another 11 million children in countries like the Philippines, Peru, Rwanda and Ukraine. In 2018, more than 10.6 millions shoeboxes were collected worldwide, with more than 8.8 millions collected in the United States. There are 328 central drop-off sites and more than 400 teams across the U.S.

Anyone can pack a shoebox and allowing your children to participate in this mission project helps them learn about giving back and shopping for other children who are less fortunate than them.
A list of items to pack in the shoeboxes and drop offs in your area is on the Samaritan’s Purse website at samaritanspurse.org/occ. Enter your zip code, and click on Finder.

Participants can donate $9 per shoebox online through “Follow Your Box” and receive a tracking label to discover its destination. Many families include a handwritten note or letter and become pen pals with the child that receives the shoebox.

Since 2010, more than 14 million children who have received a shoebox have participated in “The Greatest Journey” – a 12-lesson discipleship program. Local volunteers work with the children and teach them what it means to follow Jesus and share their faith with friends and family. The curriculum is translated in 88 languages.

One of the central drop-off sites is at Central Baptist Church on Moose Road in Kannapolis. Debbie and Gary Brumley are the coordinators for this site. Debbie has been a project leader for 20 years and she and Gary have been coordinators for five years.

Debbie said, “We are involved in year-round volunteering. Samaritan’s Purse equips you with the tools and resources you need to serve as coordinator.” The central drop-off site fills four tractor-trailer trucks with shoeboxes — approximately 20,000-26,000 each year.

Debbie shared the many ways that to become involved, either short-term or year-round. Besides filling a shoebox, OCC needs people to serve at processing centers to prepare the boxes for shipment or serve during National Collection Week at a drop-off site. Year-round volunteer positions include area coordinators, leadership roles, administrative positions, church relations, community relations, logistics, and media support. Details can be found on Samaritan’s Purse website. 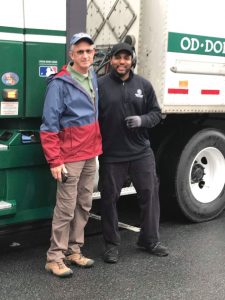 Gary Brumley with the OCC truck driver Jonathan, with Old Dominion Freight, who comes back each year to the Central Baptist Church site. Photo by Debbie Brumley

One of the truck drivers for OCC comes back to Central Baptist Church each year and the team there has become fond of him and they look forward to seeing him each year.
If you don’t make it to one of the local drop-off sites, you can take your shoebox to a processing center. Processing centers this year across the country are in Boone & Charlotte, NC; Atlanta, GA; Baltimore, MD; Chicago, IL; Dallas, TX; Denver, CO; and Fullerton, CA.

She says, “Thank you for filling a shoebox!”