Josh Bergeron: Young voters may be dragging down turnout in Salisbury’s West Ward 3 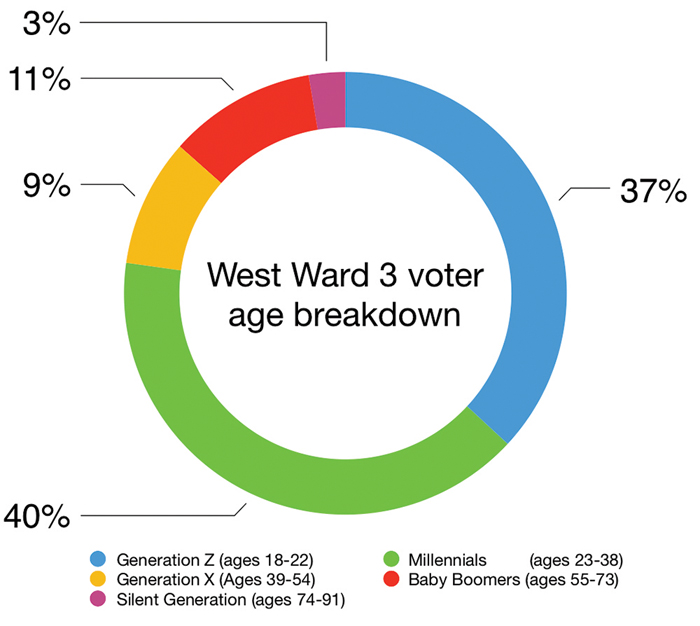 This chart shows the percent of registered voters that each generation comprises in West Ward 3, a voting precinct in Rowan County more commonly referred to as the West End. Young voters may be dragging down West Ward 3 turnout. Graphic by Josh Bergeron; data provided by Michael Bitzer

Let’s dispense with the notion that the West End doesn’t vote.

The reason West Ward 3, which includes the West End neighborhood, routinely has low voter turnout rates is due, in part, to a nationwide trend and not that one of the county’s biggest population precincts doesn’t turn out at the ballot box, according to State Board of Elections data compiled and organized by Catawba College politics professor and department chair Michael Bitzer.

Simply put, America’s youngest voters (those in their early 20s or late teens) for generations have turned out at lower rates than the general voter populace. It was true before people referred to my generation as millennials, and it’s true now.

In North Carolina, the latest addition to the generational spread in voting — Generation Z, born after 1997 — voted at a rate of 31% in the 2018 elections. The percentage was “quite high” for first-time voters, many of whom just turned 18, Bitzer said. But it’s still below the 52% for Generation X, 66% for baby boomers and 60% for the Silent Generation in 2018’s elections in North Carolina.

That the age composition in West Ward 3 skews young represents an outlier from the rest of Rowan County, where roughly 31% of voters are Generation Z or millennials, according to data analyzed by Bitzer. The next-closest precinct in the Salisbury area is named West Innes, with 38% of its voters being millennials or Generation Z. West Innes includes Catawba College, but the school does not require its students to register to vote.

Pair that with youth voter turnout trends across generations and we have one explanation for why West Ward 3’s voter turnout typically finds itself near the bottom in Rowan County.

Turnout in the most recent presidential election may be further proof that the precinct’s low turnout rate can be attributed, in part, to voter age.

Turnout among all age groups in West Ward 3 was 35% — a result of the fact that a majority of West Ward 3’s voters were in their late teens or 20s and that turnout was low among young people in West End.

Across Rowan County, the turnout was 67% among registered voters, according to Bitzer’s data.

To be clear, it’s beneficial that Livingstone College places such a strong focus on civic engagement when people of all backgrounds seem to be increasingly apathetic about the communities they live in. Livingstone is producing graduates who are more likely to vote, participate in the democratic process and, possibly, run for office.

But Salisbury and Rowan County should know that low turnout in one of Salisbury’s largest precincts is not the fault of all voters.

The solution to low turnout issues, young or old, is not easy to find, but candidates would do themselves and young voters a favor by asking about and taking action on issues that millennials and members of Generation Z care about. Doing that doesn’t guarantee young voters will cast ballots, but it certainly increases their chances of participating.

Kirk Kovach: Walker, Tillis battle would be one for…